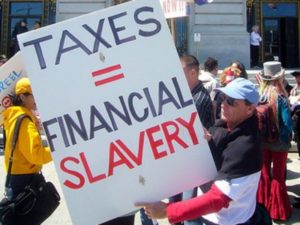 It’s the first business day of 2017, and it weighs on my mind that I will spend the next five months working for the government as opposed to working for myself. Sure, I will still get a paycheck as the government generously allows me to receive my pro-rata share of my income while I am actually working for them, but I am well aware that much of what I earn is never to be mine.

Tax Freedom Day, calculated by taxfoundation.org, is “the day when the nation as a whole has earned enough money to pays its total tax bill for the year.” Tax Freedom Day was April 24 in 2016. Prior to that date in 2016, all of the money we earned from the work that we do was claimed by various taxing bodies at the federal, state and local level. 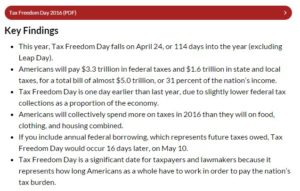 Now that we’ve rolled into the 2017 calendar, we are working again for the government as opposed to ourselves until Tax Freedom Day 2017 is upon us.

This reality would be felt far more deeply by the citizenry if we were forced to surrender all earnings entirely to government agencies until our tax debt for the year is prepaid. Taxpayers would be forced to save money during the months where we realize an income stream in order to get by in those four months of the year when we work solely for the government. We would see it and we would feel it acutely. We would realize that not only is taxation theft; it’s slavery.

So we will all be working through the winter and well into the spring rendering the fruits of our labor to our overlords. Taxation is slavery.

Sales Skyrocket For Special Edition Of ‘Mein Kampf’ In Germany