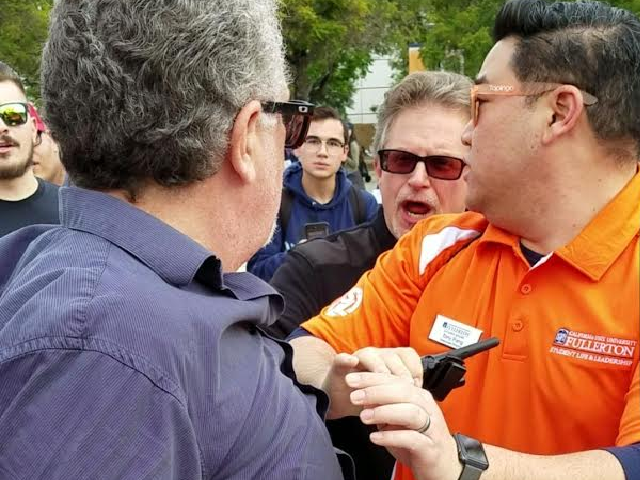 A university has suspended a lecturer who was caught on tape assaulting conservative students.

Eric Canin, a cultural anthropology lecturer at California State University, Fullerton has been suspended after calling CSUF College Republicans “uneducated,” pushing one of them and a student government member who attempted to intervene, and getting forcibly dragged away by campus security, as reported by Campus Reform.

The altercation took place off-camera during this segment and it occurred during a peaceful counter-protest of a “No Ban, No Wall” protest hosted by the CSUF College Republicans. College Republicans charged Canin with battery, a charge which is being investigated by the District Attorney of Orange County. Canin presently cannot speak with anyone affiliated with the university, as reported by Daily Titan.

“How many of you are professors joining … ?” Canin asked counter-protester students in the video. “Because the professors are actually educated.”

“It’s great that the school is taking this seriously,” Chris Boyle, president of the CSUF chapter of College Republicans, told Campus Reform. “We need to ensure that this professor never steps foot on campus and endangers a student again. It’s an important fight for the free-speech rights of students.”

“The school was right to finally act on this matter. After two weeks of waiting, the news is overdue,” agreed Amanda McGuire, the CSUF College Republicans vice president. “I’m glad the school realizes this was a serious offense, being that his disagreement with the student ended in physical aggression. It is my hope that he will not be asked to return as lecturer.”