Where a person lives in the United States could determine how long the person lives, and the disparity between counties has grown over the past 34 years, according to a new study.

“Geographic disparities in life expectancy among U.S. counties are large and increasing,” the authors write in a report published online Monday in Journal of the American Medicine Association.

“Much of the variation in life expectancy among counties can be explained by a combination of socioeconomic and race/ethnicity factors, behavioral and metabolic risk factors, and health care factors,” the report says.

“With every passing year, inequality — however you measure it — has been widening over the last 34 years,” Christopher Murray, head of the Institute for Health Metrics and Evaluation at the University of Washington, told NPR. “And so next year, we can reliably expect it’ll be even more than 20.” 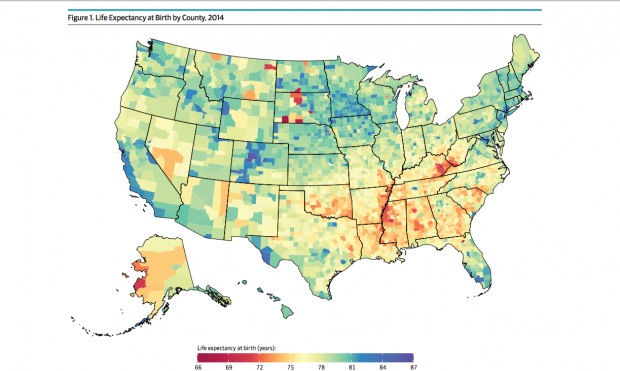 Life expectancy in the U.S. by county (Image: The Institute for Health Metrics and Evaluation (IHME) at the University of Washington/Used with permission)

When all three factors were combined, ethnic and socioeconomic factors did not explain the discrepancies with any greater insight, “suggesting that the association between life expectancy and socioeconomic and race/ethnicity factors at the county level is largely mediated through behavioral and metabolic risk factors,” the report says.

Marin County in the San Francisco Bay area of California and the mountain region of Summit County, Colo., are fairly wealth and well-educated, for example.

The researchers studied mortality data from across the U.S. between 1980 and 2014, and broke down the data into 3110 counties.

Resent research suggests that death rates of middle class Americans is changing due to “deaths of despair,” or death stemming from drug and alcohol abuse, suicide, and the slow progress in fighting heart disease and cancer, according to Princeton University Professors Anne Case and Angus Deaton. (RELATED: First Time In History, Mortality Rate Among Middle-Aged Whites Outpaces Blacks)

Other researchers have suggested that a person’s zip code is a bigger factor in life expectancy than the genetic code.