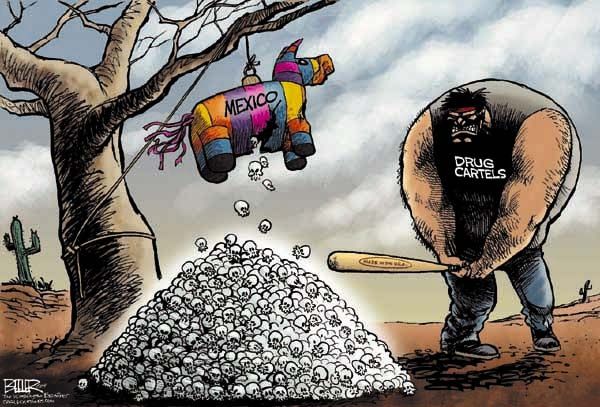 Mexico now ranks second in the world for most deadly conflict zone, surpassing both Iraq and Afghanistan and trailing just behind Syria.

Fatalities resulting from the escalating conflict between criminal cartel organizations in Mexico reached 23,000 in 2016 compared to 17,000 in Afghanistan and 16,000 in Iraq, according to a new report from the International Institute for Strategic Studies, which defines a deadly conflict zone in terms of the number of fatalities generated from conflicts, Bloomberg reports.

Only in Syria were conflict fatalities higher in 2016.

The findings are somewhat surprising because Mexico by all measures lacks the markers of a conventional battlefield conflict. There are no missile strikes, artillery, tanks and fighter jets involved the conflict.

Rather, small arms fire is responsible for almost all recorded deaths, which is why Jacob Parakilas, assistant head of the US and the Americas Programme at London-based think tank Chatham House, told CNN that the conflict is largely neglected in the news media. There are no air strikes or mesmerizing videos of anti-tank missiles.

In 22 out of 32 Mexican states, the number of homicides markedly rose, particularly so in states where competition between cartels was fiercest, due to a lack of control.

“It is noteworthy that the largest rises in fatalities were registered in states that were key battlegrounds for control between competing, increasingly fragmented cartels,” Anastasia Voronkova, editor of the survey, stated.

“The violence grew worse as the cartels expanded the territorial reach of their campaigns, seeking to ‘cleanse’ areas of rivals in their efforts to secure a monopoly on drug-trafficking routes and other criminal assets,” Voronkova added.

Part of the reason the fights between drug cartels are so bloody is because the stakes remain high. Drug sales in the U.S. from these cartels account for between $19 and $29 billion in revenue every year.

The report noted that Mexico and Central America account for 21 percent of fatalities around the world, due to entrenched conflicts, though global fatalities as a whole dropped from 167,000 to 157,000 last year.