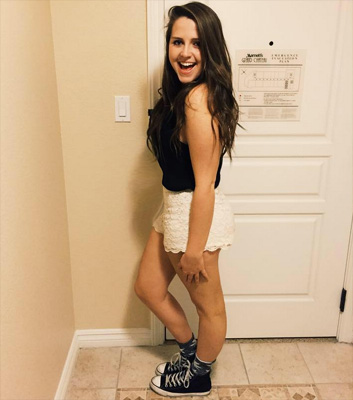 A Gift From Heaven? Or A Demon From Hell?

File this story under why can’t this happen to me?

It may be sexist to say that most men would love a hot coed, with 2 bags full of weed, bust into their room, strip naked, and jump on their bed. But I don’t care if that sounds sexist because it’s true. But alas, the universe has decided that this gift from heaven should be bestowed upon the one man who just doesn’t want any part of that.

Last week, a woman burst into a stranger’s house and made her way to one of the rooms where she stripped naked and began jumping on the bed.

According to the AZ Daily Sun:

According to the police report, the victim called police around 4 p.m. Friday after a young woman he did not know ran into his apartment when someone there opened the door. The suspect ran into a bedroom, started jumping on the bed, took off all her clothes, started shouting “am I pretty?” and refused to leave.

When officers arrived, they saw the suspect standing on an exterior second-floor balcony completely naked and yelling incoherently. She put on her underwear, then launched her body into an officer who was climbing the stairs toward her.

The woman apparently had been on a bender that day. She was at another residence earlier that afternoon and was kicked out for randomly yelling for no reason. She had also got into another stranger’s home by using a lawn chair to smash a window. She also used the same lawn chair to hit a parked jeep. She then made her way to the home of the”victim” where her escapades continued, albeit with less clothes.

When the police arrested her they found two bags of marijuana in her pant pockets. After being placed in the back of the police car, she managed to slip out of her handcuffs and began destroying the inside of the car.

From the AZ Daily Sun:

On second thought, maybe the man who rejected her naked advances played it smart. As a wise man once said, “You don’t stick your d*ck in crazy.”