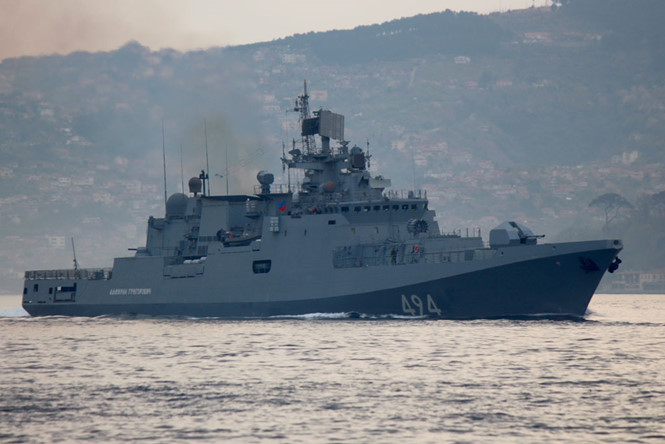 A Russian warship entered the eastern Mediterranean Friday and was heading toward the area where two U.S. Navy destroyers launched missile strikes into Syria, Fox News has reported.

Following the US airstrikes on Syrian air bases, Fox News is reporting that a Russian military ship is headed in the direction of the US destroyers which launched the previous night’s attacks.

Admiral Grigorovich RFS-494, has crossed through the Bosphorus Strait “a few hours ago” from the Black Sea, according to a U.S. defense official, per Fox News.

The frigate was bound for the Syrian port of Tartus on a routine voyage, the Russian news agency TASS reported Friday, citing a military-diplomatic source, according to Fox.

“The Russian ship armed with cruise missiles Kalibr will visit the logistics base in Tartus, Syria,” the source said, according to TASS.

Retired Lt. Col. Mitch Utterback, during an appearance on Fox News’ “Happening Now,” told host Jon Scott, “I don’t consider it a threatening maneuver, it’s something that Russia has to do and it’s something that can make the international news, like it’s making today. but you can be assured and we can all be assure that we have the protection that our navy needs out there in the Med[iterranean Sea]. There is no threat to the US from that Russian ship.”