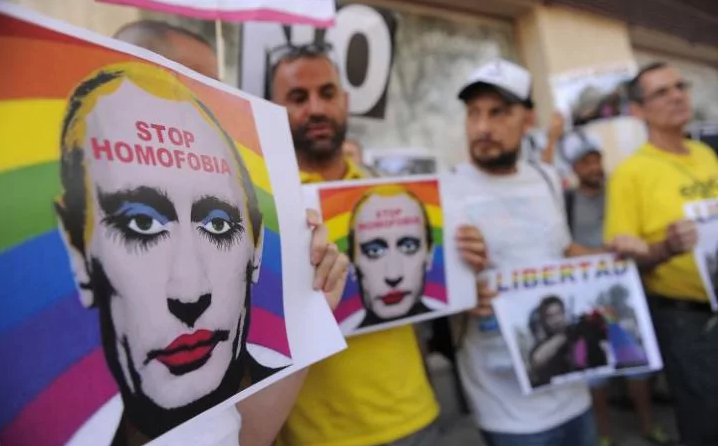 Russia’s justice ministry added the image, which depicts the Russian president in lipstick and mascara, to its list of banned extremist material last week, explains the Telegraph.

The clown meme reportedly first appeared in 2013 after Russia pass controversial “gay propaganda” law, which sought to ban the promotion of homosexuality to minors. At the time, Putin said was not an attack on homosexuality, which is legal in Russia, but an attempt to protect children.

The meme produced a host of images, and was even played on by Scottish brewery Brewdog for a special edition beer called “Hello my name is Vladimir,” the Telegraph reported.

The Russian justice ministry explains that the ban applies specifically to a picture posted on Vkontakte, a Russian social network, that is intended to represent “the supposed nonstandard sexual orientation of the president of the Russian Federation” and carries the caption: “Putin voters… they say there are lots of them, but there aren’t any among the people I know,” according to the Telegraph.

Alexander Tsvetkov, according to the Telegraph, was the artist behind the meme.

The Putin photograph is the 4,071th banned item on the register of 4,074 banned materials that also includes Nazi imagery, white power slogans, and jihadist websites encouraging terrorism, said the Telegraph.

‘I Engaged My Rage’ Says Student Who Destroyed Anti-Abortion Signs

Border Wall Is A ‘Metaphor’ According To GOP Senator