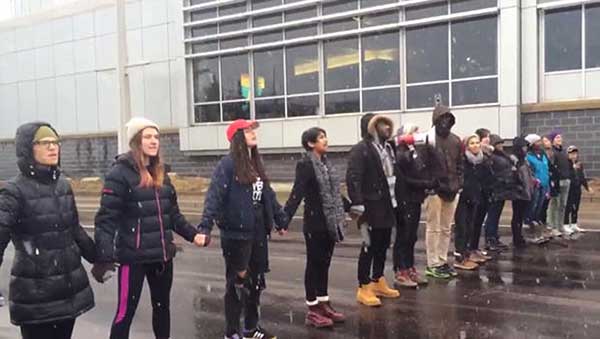 A Minnesota cop has been put on leave after allegedly writing a Facebook post that infuriated Black Lives Matter advocates and appalled local officials.

Black Lives Matter activists blocked traffic Monday with one of their protests. In response, St. Paul Police Sgt. Jeffrey Roth allegedly wrote on Facebook that locals should run over the “idiots” and that they would probably get away with it, Fox9 reports.

“Run them over,” the post reads. “Keep traffic flowing and don’t slow down for any of these idiots who try and block the streets.”

A man named Andrew Henderson screenshotted the post and called St. Paul police to report it.

“It’s really concerning to me that someone would encourage violence on a day celebrating a man who taught peace,” Henderson told WCCO.

The full post advocates running over protesters and saying you feared for your life as an excuse. He says you’ll probably get off on a jury trial anyway. Here’s the full post, which has been deleted:

Run them over. Keep traffic flowing and don’t slow down for any of these idiots who try and block the street. Here is the deal, you continue to drive and if you hit someone make sure you call 911 to report the accident and meet the cops a block or two away and you can justify stopping further away because you feared for your safety since the past people in this group has shown a propensity towards violence. Since they are trying to block the street and/or cross where there is no crossing you should not be charged with anything. Now, these idiots could try and sue you in civil court, but remember that it will be jury trial and so most likely it will come out in your favor.

Police have not released all the details but say they are investigation the post and will take “swift, strong and decisive disciplinary action” if the allegations are confirmed. The town’s mayor has come out and condemned the comments.

Black Lives Matter has become much more active in the state since the November death of Jamar Clark, a black man who was fatally shot by police after a struggle. State and federal authorities are investigating the death. Tensions rose further after a group of men in November sprayed bullets into a crowd ofBlack Lives Matter protesters outside the Minneapolis police station.

“We are aware of the concerns surrounding a comment that may have been written by a member of the SPPD and posted on Facebook, and we are actively investigating,” the St. Paul police department said Tuesday in a post on Facebook. “The statement is offensive, disappointing, concerning and does not reflect in any way—or align with—the views, values and practices of the Saint Paul Police Department. If it is determined that the comment was written by a member of the Saint Paul Police Department, swift, strong and decisive disciplinary action will be taken.”