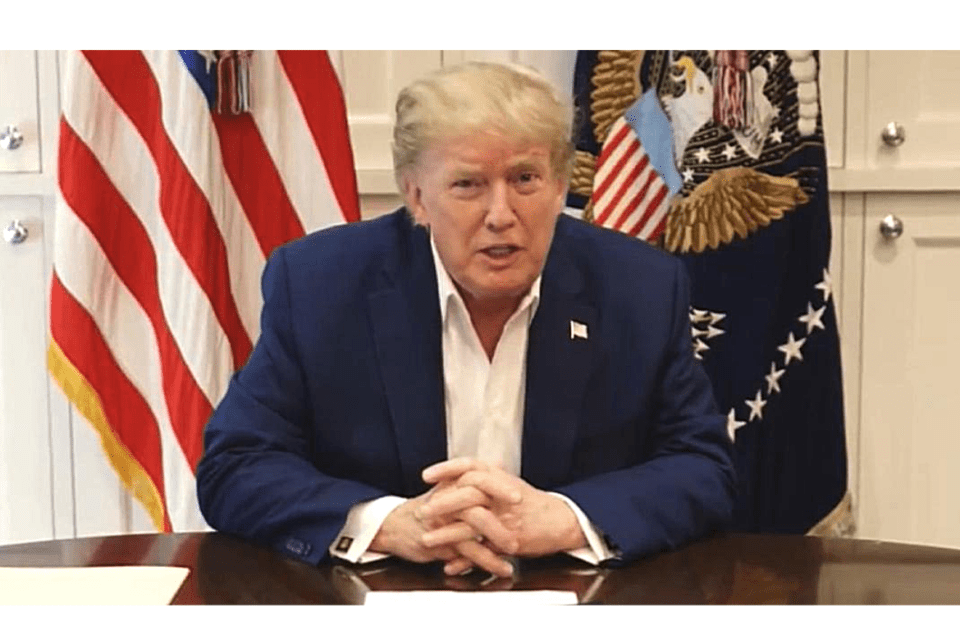 Does not Donald Trump deserve some credit for finally talking about what we should have been talking about for these last seven horrifying months? He got the bug, shook it off, and thereby beefed up his immune system.

The optics are impressive. And the case he should make now is that he can travel the country and indeed the world with his beloved First Lady doing Nobel Peace Prize nomination-worthy stuff and returning the economy to a robust condition that will help all the downtrodden to catch up for lost income, without fear and without masking or other authoritarian-ish forms of social distancing.

That’s a real twist. And consider that if Biden were to win, however, he would have to hide in his bunker for at least the first half of his presidency and apparently will try to force the rest of the country to join him, at least for the first few months. He’ll be under pressure to “do something” about the deteriorating economy, which is still struggling and likely cannot survive a second lockdown, but if he ventures about too much he will be subject to withering criticism for not following his own lockdown mandate.

And God help him if he gets a haircut.

What if POTUS Joe catches the Covid? Old Joe will turn 78 this November. Although he appears to be in better shape than Trump, every year of age increases the probability of his death exponentially (this is defensible if one doesn’t mention what the exponent is). Why, he would probably die twice from the disease (okay, that is hyperbole but it does fit the tone of much Covid coverage) but it might take a while and the country would be in utter chaos without Joe’s firm grasp on the rudder because not just the ship of state but the entire country relies so desperately on the leadership of POTUS.

Eventually, Kamala Harris would become president. She’s a fighter, but it would be bad news as the nation spirals out of control. I won’t bore you with the line of succession but some of the folks near the top of the line would likely have to dodge bullets as well as the virus because they are geriatrics hated outside of their gerrymandered districts and would not be welcomed residents of the White House. Certainly they would not have a “mandate” to rule, so again the country would be rudderless and without a “plan.”

But these Democrats are a smart bunch, and the evidence, they believe, is that they wear masks. But recall that “the” scientists say that mask-wearing protects others, not the wearer. Will Biden or Harris not have any contact with the public as they “fight” to do this, that, and the other thing? Will they instruct the Secret Service to push away mothers carrying maskless youngin’s? That would be good publicity, NOT! But they would have to do so because “we all know” that kids are Covid carriers likely to kill even young, healthy teachers and professors. Why else would all those schools and colleges offer only inferior remote instruction this Fall?

Of course it is possible that after Biden’s election a safe vaccine will appear and coronavirus cases will plummet because the whole country will be fighting systemic racism, which as we “learned” over the summer is a major virus inhibitor according to “the” scientists. But we cannot be certain of that and it is difficult to be optimistic after seven months of bad news magically appearing after every tidbit of good news.

All that we can be sure of is that a live Donald will be able to serve the American people without restriction, something his opponents cannot say. So Trump’s message is that anyone who is truly serious about the pandemic has no choice but to vote for Trump.

Or we can be truly serious about the pandemic in a different way. Nobody is, or should be, happy with the way American governments have handled this crisis because over 200,000 people have died and the economy is in tatters (translated: tens of millions of Americans are hurting a lot, inducing some to join Covid-19 victims the old-fashioned way). Lockdowns are unconstitutional and at best delay the inevitable at a price that is too high to pay.

In fact, the most serious that one can be about the pandemic is to join the fast-growing Great Barrington Declaration movement. Read it, sign it, and make your elected politicians implement it.

The Declaration says, in effect, the same thing that I did back in my early April “Plan to End This Madness:” stay at home or wear a hazmat suit about town if you want, but allow others the courtesy of going about their lives. If they get sick and die, it is none of your business. They can’t get you sick if you are in your basement in a hazmat suit or living whatever “social distancing” rules you think fit.

If they get sick and get well, which is much more likely than them dying, even for middle aged fatties like me, then America is one step closer to “herd” or community immunity. The faster that threshold is reached, whatever the percentage of the population it happens to be in this case, the faster everyone can resume their 2019 lifestyles.

In fact, the biggest difference between the Great Barrington Declaration and my April “plan” is that the former was written and signed by bona fide medical experts and since then thousands of other medical experts, plus tens of thousands of common Joes and Josephines like me, have joined the club by rejecting groupthink and thinking carefully about the evidence in favor of liberty and personal/familial responsibility, which is even stronger now than it was in early April. Regardless of your vote this November, it is indeed time to join Biden in his call to follow “the” scientists, the ones who have signed the Great Barrington Declaration.

Robert E. Wright is the (co)author or (co)editor of over two dozen major books, book series, and edited collections, including AIER’s Financial Exclusion (2019). Robert has taught business, economics, and policy courses at Augustana University, NYU’s Stern School of Business, Temple University, the University of Virginia, and elsewhere since taking his Ph.D. in History from SUNY Buffalo in 1997.

Why Did the iGaming Industry Grow So Much?