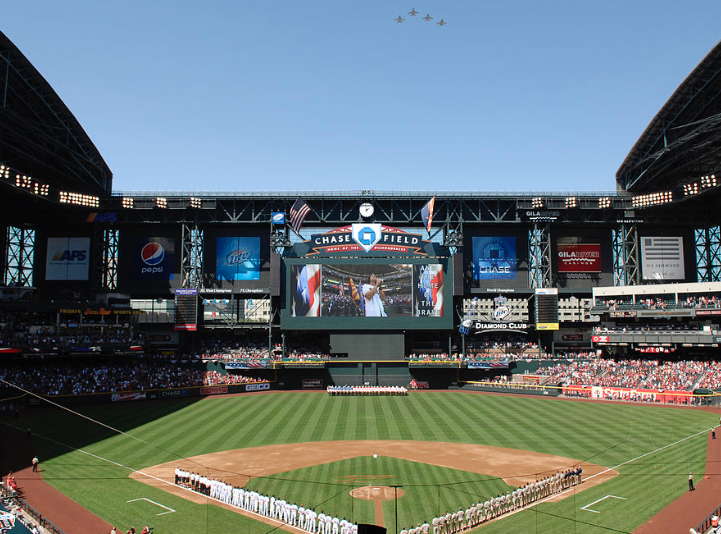 I moved to the Phoenix area in 2013. One of the things I liked immediately was the access to all four major sports leagues. On top of the fact that the Valley also has arena football, WNBA, a PGA tournament, two Nascar Races, Indy Race, NHRA event, Spring Training, and many one-off major sporting events, we never run out of things to see.

The other thing I liked about the area was that all of the arenas were in relatively safe locations, and were all excellent places to visit. They had all been built within the last couple of decades and seemed to be well maintained. The teams that played in them weren’t all that good but the atmosphere was nice, and from where I came from it was nice being able to experience pro sports.

While I am not a fan of taxpayer funded sporting venues, apparently the citizens of Maricopa county had felt differently, and these coliseums were up and running.

I grew up in Birmingham Alabama, while college football is king there was virtually no professional sports. Beyond the Birmingham Barons minor league baseball team nothing more than the sporadic flash in the pan semi-pro team. Growing up watching Alabama football at Legion Field which was built in 1927 and the Barons playing until 1986 at Rickwood Field, now the oldest pro ballpark in the US still in operation, I wasn’t accustomed to the fancy new stadium features.

So yes I enjoyed the behemoths of tax-funded concrete and steel.

Now my new home of Phoenix faces a triple shot of new stadium greed. Three of our pro teams want new digs. The Suns, the Coyotes, and the Diamondbacks all say they need new venues to survive and compete. Notwithstanding that the oldest of any of their respective venues was built in 1992 a mere 25 years old.

The Coyotes want the taxpayer to foot half of the 800 million dollar cost of their new location. Their current home was built in 2003 and is one of the newest venues in the NHL. The main problem they seem to have with the current situation is that the city of Glendale who owns the stadium recently voided a contract that actually paid the Coyotes 15 million dollars a year to use the facility that has already cost taxpayers well in excess of 200 million dollars.

The team with the oldest stadium is the Phoenix Suns; they want it replaced for the obvious reason of its just too old. Granted Talking Stick Arena is the seventh oldest building in the NBA, so it’s an easier argument than most. The Suns also pay a higher rent (1.4 million annually) for their location that the Coyotes ($500,000) and the NFL’s Cardinals ($292,915) combined, who inhabit the newest two sporting arenas in the Valley.

The Arizona Diamondbacks have suddenly also decided that 18-year-old Chase Field has outlived its usefulness. No longer is it’s retractable roof and outfield swimming pool (yes it has a swimming pool) enough. Originally, demanding 185 million dollars in repairs and upgrades now it seems a new and improved venue is needed for the team to be competitive. The Diamondbacks recently sued the Maricopa County and its taxpayers to break their lease, which currently keeps them in Chase Field until 2028. Keep in mind that the original tax that was levied against the residents of Maricopa County to build Chase field was so contentious that County Supervisor, Mary Rose Wilcox was shot leaving a county meeting due to her support of the hike.

This is a theme that has played out time and time again across the country. Communities held hostage to the demands of major league sports and its owners. Cities who have been home to teams for generations suddenly face losing their teams if they don’t submit to wishes for the newest Taj Mahal of sports. Cleveland, Los Angeles, Saint Louis, Houston, Atlanta, and others have all lost teams or been pressured into building new venues at an alarming rate.

Claims that new stadiums will somehow make the team better and more competitive are common. However, that argument doesn’t hold water. The Cubs won the World Series a few months ago with the second oldest facility in baseball. The Red Sox have won multiple championships out of the oldest. The Golden State Warriors play in the oldest arena in the NBA. The Green Bay Packers are in the playoffs seeking their fifth Super Bowl and tenth World Championship overall since moving into the NFL’s third-oldest venue.

Of these, only the Warriors have any plans to move into new digs ever.

Back to Phoenix, of the three teams looking for new venues, only one has ever won a World Championship. The Diamondbacks beat the New York Yankees in the 2001 World Series. The Yankees who won 26 Championships in the 85 years they were in old Yankee Stadium. Currently, all the teams seeking taxpayer-funded stadiums in Phoenix are a long way from being competitive, much less championship caliber teams.

So perhaps, if we insist on continuing funding these projects, it’s time to change the rules. How about some performance incentives for these teams and their owners? Sub .500 season? Your rent increases 15%. No championships in a decade? You lose your tax breaks.

Of course, this will never happen and since it won’t the major league teams will have the power. Municipalities know that another city will be willing to give away everything to get what they have. How do they know? Because they already did it.

So if you’re in a town with major league sports, and your teams stadiums are getting some age on them. Watch what happens in Phoenix closely, because you’re next.

Gender-Neutral Parenting: Why Resistance to Biology May Prove Futile