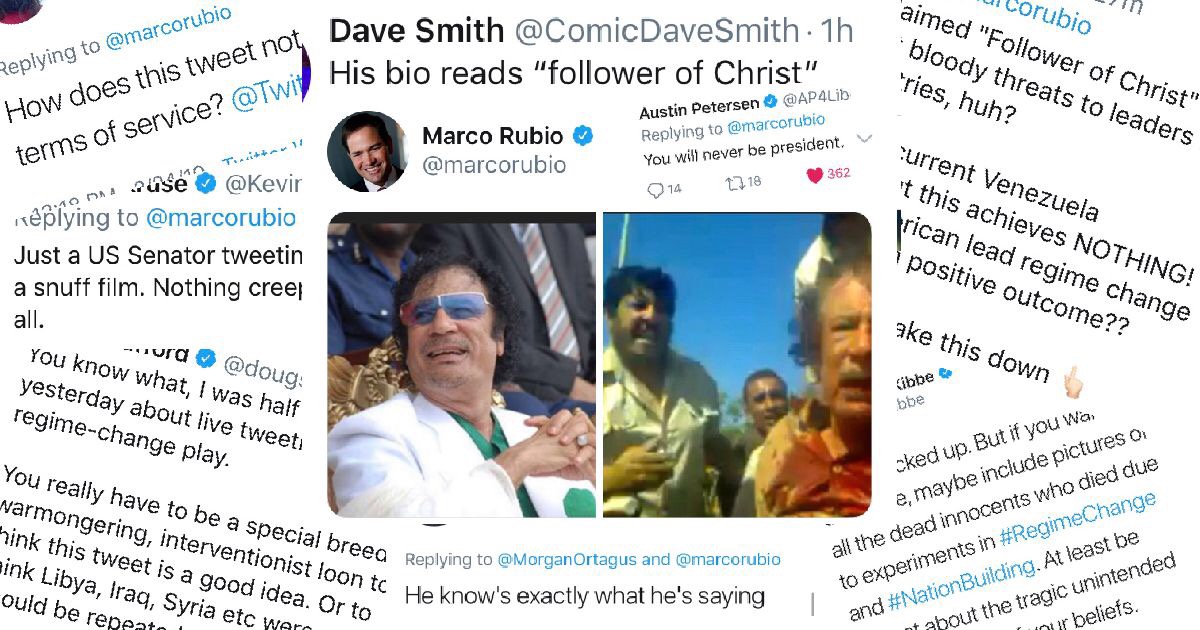 The Republican base is waking up, and their establishment darlings are sleeping on them.

In what once would have been fresh red meat, Florida Senator Marco Rubio tweeted out a rather morbid before-and-after photo of the late Libyan Dictator Muammar Gaddafi; the before being while he was still in power, and the after during his infamous death march whereby the former leader was publicly tortured and sodomized.

An outspoken supporter of the U.S. led Libyan coup, Rubio’s tweet was a not-so-subtle endorsement of a similarly perpetrated regime change in Venezuela – and Twitter isn’t having a bit of it.

These are among the tamer critiques of Rubio’s tweet.

Given how notably hawkish the Republican base has been on foreign intervention and regime change since 9/11, one might have considered this a slam dunk for political points. But from both the comment section of his own tweets and from my own personal experience with young republican voters, this could be at long last a trope on its way out. The once ubiquitous lock-step support for militarism among the Republican voter base ushered in by the War On Terror has been wearing out its welcome. The “red meat” is spoiling.

People are putting things together. Eighteen years of endless wars leaving the world far worse off and Americans far poorer than they would have been otherwise is a giant BS sandwich beginning to turn in the stomachs of voters across the nation. Whether you credit Ron Paul, Trump, or a combination of both for the blossoming anti-war sentiment now trickling into the mainstream, you can’t deny it’s there. And politicians need to posture accordingly if they don’t want more of what the senator from Florida is having right now.

“Common Good Capitalism” Is No Substitute for Free Enterprise