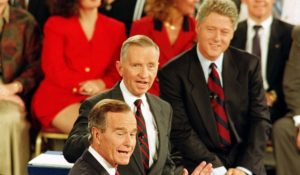 Ross Perot, a wealthy Texas businessman, was an independent candidate for president in the 1992 election. He is often considered to have had a spoiler effect by taking support away from incumbent president George H.W. Bush and thus handing the victory to Bill Clinton. Is that what actually happened? Let’s take a look.

Perot received a great deal of grassroots support and was able to get onto the ballot in every state well before election night. For a while, he was leading Bush and Clinton in the polls. This was likely due to a combination of his straightforward style, the incredible detail of his proposed policies, and a growing sense of discontentment with career politicians.

He hurt his campaign when he dropped out in July, which also upset many of his supporters. However, he jumped back into the race in October, and polls indicated that viewers felt he performed well in each of the presidential debates. Despite this, his numbers never returned to where they were before he dropped out.

Ultimately, Clinton won the election, with Bush taking second place and Perot finishing in third. Because Perot received 18.91% of the popular vote while Bush got 37.45% and Clinton got 43.01%, many cite this as evidence of Perot helping to swing the election away from Bush and toward Clinton.

The first thing to keep in mind is the fact that it’s not the popular vote that determines the next president but the electoral vote. The minimum number of electoral votes needed to become president in a straightforward election is 270; failure to reach this number results in the House of Representatives deciding the winner. Clinton got 370 electoral votes, one hundred more than he needed, and Bush only got 168. How many did Perot get? Zero. If he had gotten a decent number of electoral votes, the case could be made that he did hurt Bush’s campaign. The fact that he didn’t get any makes that case much harder to accept.

Another idea that’s often mentioned is that while Perot may not have won any electoral votes, he drew enough popular support away from Bush to give Clinton the victory. The reality is more complicated. For one thing, exit polls revealed that Perot supporters in states that Clinton won tended to prefer Clinton, and Perot supporters in states that Bush won tended to prefer Bush. Overall, Perot drew support about equally from both Bush and Clinton. Further, some of his supporters said they wouldn’t have voted at all if he hadn’t been running. Those people didn’t take support away from either of the main candidates by voting for Perot because they were never going to support those candidates in the first place.

What about Perot’s policies? As explained by the man himself in this half-hour infomercial, among other things, he favored increased taxes on wealthy people, extensive investment in infrastructure, more government involvement in healthcare, and keeping jobs in the US instead of exporting them to other countries. These ideas set him apart from both of his opponents and meant that Perot was not the candidate for voters who preferred small government to big government, or were upset about Bush increasing the size of government during his presidency.

Then there are some things that have to be said about Bush. He was able to ride Ronald Reagan’s momentum and easily win the 1988 election, but the 1992 election was a different story. Bush breaking a promise from his first campaign to not raise taxes, a period of economic downturn (including a recession), his presentation lacking the style and polish of Reagan, the failure of his attacks on Clinton to do any serious harm, and Clinton’s effectively-run campaign compared to Bush’s lackluster campaign all drastically hurt Bush’s bid for reelection. Even if Perot had not entered the race, these issues all would still have been problems for Bush’s campaign.

Thus, contrary to common claims, Perot did not provide a Democratic victory by splitting the Republican vote. The arguments in favor of this idea don’t hold up under scrutiny, particularly because they ignore the negative view many voters had of Bush by the time the 1992 campaign rolled around; the substantial policy differences between Perot and his opponents; the effectiveness of Clinton’s campaign; and the fact that Perot failed to get even a single electoral vote. While it’s possible that a third party candidate could have a spoiler effect on an election, Perot is not an example of such a candidate.