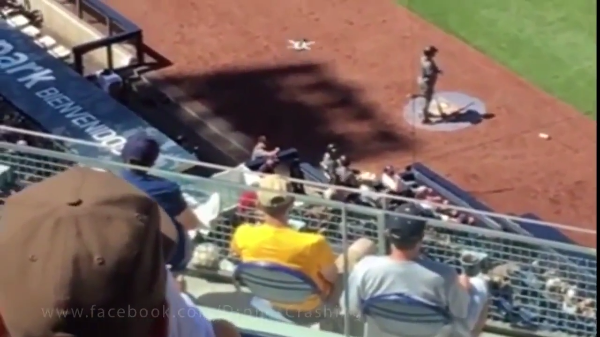 A rogue drone embedded with a camera crashed into the stands Sunday at Petco Park, the home venue for the San Diego Padres, during the middle of a baseball game.

Fans gazed at the flying device as it zipped around the arena, even getting very close to the field of play. The unmanned aerial vehicle (UAV) eventually whipped into an empty seat in the stands, just missing a number of fortunate fans.

Another angle more clearly shows the drone’s crash landing, including the debris that that breaks off from the device.

The operator, who was eventually tracked down by the Padres’ security team, as well as the San Diego Police Department, is not being charged with a crime. (RELATED: The FAA Is Fining A Man $55,000 For Flying His Drone)

While relatively new, laws implemented by the Federal Aviation Administration (FAA) forbid the general use of UAVs over highly trafficked areas, and more specific locations like airports. The regulations also prohibit operations that are beyond the visual line-of-sight (VLOS) of the pilot.

“This is why the responsible drone pilots like me will be paying high price for our freedom to flight because there are some idiots that do this kind of stuff,” YouTube user John Hernandez commented on a video of the incident. “The guy who did this should be in jail.”

In A Moment Of Racial Solidarity, Black And White Guys Who Can’t Rap Bust Rhymes On Interracial Bachelorette