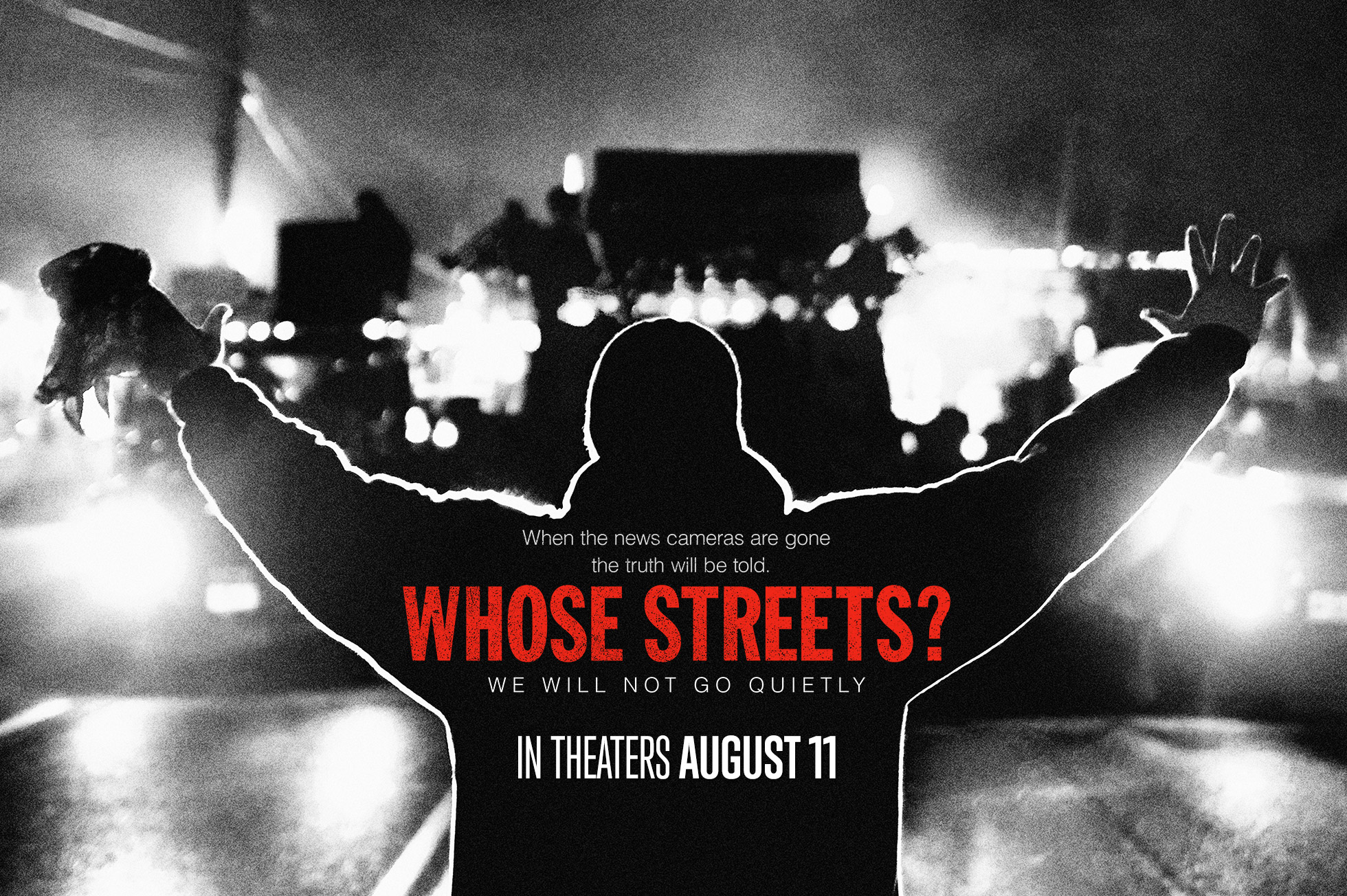 “Facts can be so misleading, where rumors, true or false, are often revealing.”

‘Whose Streets’ is a boots-on-the-ground, in-your-face document of the most seminal race-related event of the past decade: the vigils, protests, police-overreaction, and federal investigation regarding the shooting death of Michael Brown Jr.

This is The Black Lives Matter origin story.

It begins minutes after Brown’s death as police cars, SUVs, K9 Units, and primarily white officers with assault rifles move to secure the scene. A crowd gathers. Tension becomes palpable. Eye witnesses state Brown had his hands up. Another eye-witness said he was shot ten times in cold blood. An officer tells Brown’s mother to calm down and she flips out, screaming in a way only a mourning mother can.

That night there is a march and a vigil. Police block the road. Inevitably there’s looting and riots and a convenience store is burnt to ground. The next night police block the roads with bigger vehicles and begin to shoot gas grenades and rubber bullets from the kind of artillery at home in a Michael Bay film.

The thunderous CRACK from these firearms and their frequency of use will stay with you long after the movie ends.

More rioting and destruction of property.

The police gas reporters and shut down cameras. They pie face the director’s camera. They refuse to let her go to her car.

Things get worse. Another man is shot. More looting. The national guard is called in. Someone sets fire to Michael Brown’s memorial. The Mayor and the Governor display shocking incompetence in the public sphere, at one point refusing to state who is in charge and responsible for law enforcement misconduct during the protests.

President Barack Obama defers to the state government and is more-or-less called an Uncle Tom by an interviewee – stating Obama doesn’t know the law.

The problem was Obama did.

The police feel embattled and start to wear bright green shirts to signify who they are at council meetings. A white citizen says he’s scared. A black one says welcome to the party.

There is no indictment for Darren Wilson – the officer who shot Michael Brown. More rioting and protesting. Cars are set ablaze.

It’s a disaster. Citizens so divided and rigid and scared of the people sworn to protect them, they openly question the need for police at all – just as, in the wake of Charlottesville, many are questioning the right to peacefully assemble.

Die-ins, highway blockages, and then the pyrrhic victory of the federal government stating there was a systematic race problem in Ferguson, where black people were targeted and received tickets and fines at a far higher rate than white people.

Imagine a virtual reality experience for all of that. Not archival footage. Not talking heads or film cribbed from CNN or Fox News. But instead you’re in those protests, in those vigils, dodging those rubber bullets and gas canisters – running scared – through the eyes of people’s phones and the director’s camera.

But there’s nothing virtual about it.

‘Whose Streets’ gives you this experience first hand. Taking viewers inside the lives of the people involved, inside the protests, funerals, and council meetings, you are there – a conscious but silent observer.

Regardless of your politics, race, and the facts, this is a powerful and visceral depiction of the shattering of a long-strained social contract. And that’s the triumph of ‘Whose Streets’. The footage. The texture. The…overwhelming sense bearing witness to this tragedy is Awesome in the strictest sense of the word.

The people who think they know everything there is to know about the black community, are happy to tell them what to do, but don’t ever bother to see their side of the coin.

If you want to see inside the events and brutality that lead to the creation of Black Lives Matter, see this movie. You want a window into the world you’re happy to judge from behind a computer monitor? See this movie. You’re absolutely certain the black community ‘brings it on themselves’? See this movie and get back to me.

That’s not to say the movie is perfect. It feels long – the most compelling footage is that of the protests and riots and how poorly the government reacted to this situation.

When it detours into a lesbian love story, or when it depicts BLM blocking traffic, it loses both steam and the proverbial high ground. Personally I am of the mind stopping traffic on a busy freeway does more harm then good.

Thurgood Marshall would agree with me. Martin Luther King Jr and Malcom X would not – so take that as you will.

…And the cynic in me would be remiss if I didn’t mention how by the end of the documentary there are Michael Brown shirts in a variety of styles. The crowds shout in unison. Drummers. Orators. Kids on the front lines of these protests where police have been aggressive.

It’s not the case, but some of these protests felt like a social event – down to solo cups in the hands of the participants.

But that’s my privilege talking. I look at the solo cups and the kids and the chants and the…merchandising and I get skeptical. Then I remember 9/11 commemorative coins and 11 dollar ‘Boston Strong’ bracelets and realize profiting off a tragedy is distinctly human – I’m sure I can find a picture of a four year old with a Make America Great Again hat, too.

The official story goes there was a struggle when Michael Brown Jr was shot dead by Officer Darren Wilson. Brown’s DNA was found on Wilson’s gun and the thigh of Wilson’s pants – indicating a struggle. The blood splatter analysis revealed Brown was moving toward Wilson when he died – indicating aggressive behavior.

He never thew his hands up and said ‘don’t shoot’. So the facts came to light, and the shooting was ‘justified’ in the eyes of local PD and in the eyes of the FBI.

But it doesn’t matter – and that’s why I quoted everyone’s favorite movie Nazi up above – facts don’t matter in this case. The rumors. The speculation. The outrage did. Symbols are symbols and Martyrs are Martyrs. Michael Brown was a martyr and our world will never be the same because of what happened.

And there’s never ‘justice’ in killing an 18 year old kid – criminal or not.

During this movie’s time frame, none of that information was available to the citizens of Ferguson. They did know the police found it reasonable to release footage of Michael Brown robbing a store – while at the same time stating the confrontation resulting in Michael Brown’s death had nothing to do with that robbery.

A black female commenter stating she’ll never listen to a word Van Jones says because he has a white wife.

The first comment on ‘Whose Streets’ Youtube channel? A white guy saying Black Lives Matter is a racist, terrorist organization and Michael Brown Jr was a criminal who deserved to die.

“And so we beat on, boats against the current, borne back ceaselessly into the past.”

‘Map Of Death’: North Korea Has A Detailed Plan To Incinerate Guam

Yes, you can reject Antifa Commies and Alt Right Nazis at the same time