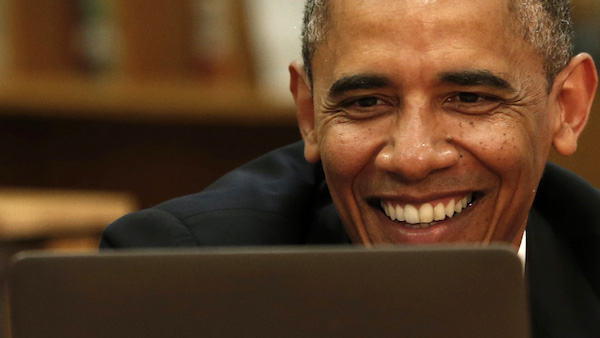 It’s easy to be lulled into a false sense of security online. National security advocates are always touting the idea that their primary goal is to catch terrorists. Then, Cracked writer Daniel O’Brien‘s story comes along to remind us that nothing is safe, even satire. Namely, satire that involves our unbelievably egocentric president.

Not that I’m advocating satirical websites and TV shows. I think they kowtow to an increasingly idiotic audience, and are sometimes given more credence than legitimate news sources. We all have that one friend that considers themselves a political expert after watching one episode of The Daily Show.

Yet the article that landed O’Brien in hot water with the feds was actually one of Crack’s more humorous articles. Although it has subsequently been removed from the site due to a government subpoena, it’s archived here, and is a how-to guide for kidnapping the president’s children. O’Brien is also doing research for what sounds like a hilarious book called How to Fight Presidents, “a comedic nonfiction book that teaches you, appropriately enough, how to beat the crap out of every single lunatic who ran this country. ”

Apparently this research raised some flags, and has led to O’Brien being detained “five out of six times” that he flies. The Secret Service found his work to be “lightly treasonous”, while simultaneously trying to say that they understood satire. In his first phone conversation with the Secret Service, an agent allegedly said, “I know it’s a comedy website, I know you’re doing jokes. It just so happens that it’s my job to pay attention when certain … concepts are brought up online. That article, combined with your fascination with fighting presidents … well, that’s the kind of thing I need to know about.”

This seemingly innocuous and amicable encounter encouraged O’Brien to follow-up and go to the Secret Service’s downtown LA offices. Once he got to his interview, he realized he’d been set up. In a two-hour torturous interrogation, in a freezing room, O’Brien was repeatedly asked the kind of questions you’d expect from someone with the mental capacity of Kim Kardashian.

O’Brien correctly pointed out that his article was sprinkled with “impractical” and “useless” information, and even explained that he did that so people would know he was joking. The agents took this as proof that he actually knew a practical way to kidnap a president’s child. Repeatedly his jokes were thrown at him with the ending line, “Why did you say that?” Having to explain that he clearly didn’t have a Pocahontas skeleton in his closet and “why “murder-boner” is an inherently more richly comedic pairing of words than “death-erection,” was an exercise in exquisite humiliation.

For O’Brien’s part, he looks back on the whole ordeal as highly amusing, as his article about it conveys. Yet this type of unbridled harassment is one of the reasons Reporters Without Borders just listed the US as an “enemy of the internet.” God forbid you touch a nerve with our hyperactive government agencies, or you’ll be treated like a terrorist just for telling a joke.