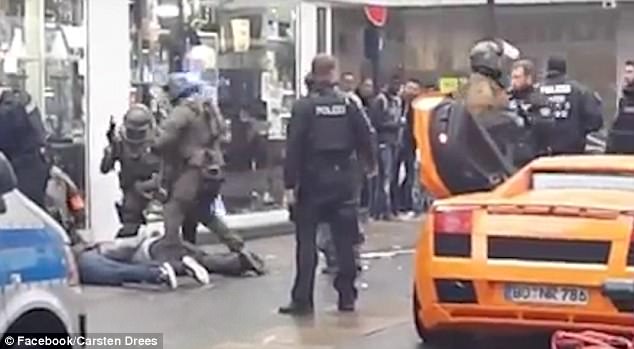 Aspiring rappers shooting a music video with a purportedly “Islamic Feel” were arrested in Germany Wednesday, only a day after a terrorist bombed a bus belonging to one of the country’s premier soccer teams, according to The Daily Mail.

Footage captured by an onlooker shows dozens of cops from a specialized unit patting down the three rappers. Two of them were pressed against a nearby store window, and another was forced to the ground, so law enforcement could search them and their Lamborghini for weapons.

The three men were driving around the city and filming a music video with fake firearms.

The “deceptively real-looking long-arm caused fear and fright in several citizens,” a Dortmund Police spokesperson said, according to The Daily Mail.

Bystanders were allegedly worried because at least one of the men had a long beard, with some saying their conduct had an “Islamic feel,” The Daily Mail reported Thursday.

The men taped the music video while tensions in the city were high from a terrorist attack just a day prior.

The latest incident with the rappers isn’t the first time recording videos with guns have gotten people in legal trouble.

Police in Alabama arrested at least two people in December after they received a video of several gun-wielding men participating in a “Mannequin Challenge” — a viral video sensation where people remain frozen in mid-action.