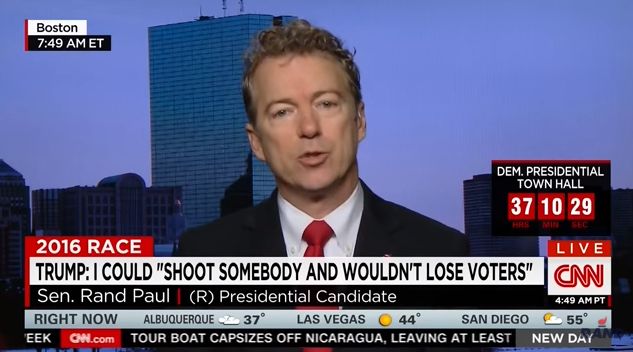 Kentucky senator and presidential hopeful Rand Paul took sharp aim at GOP front runner Donald Trump after the real estate tycoon boasted that he could shoot someone in the streets without losing support.

Paul, appearing on CNN’s “New Day”, did not hold back when asked about Trump’s remarks.

“I think, sometimes, narcissists have delusions. And I think he’s almost to the point of being delusional about his own power,” said the senator.

Paul then voiced concerns about Trump’s desire to be a authoritative executive prescribing big government solutions.

“There’s a distinct American tradition that I represent that says too much power gravitating into the hands of anyone is a mistake – Republican or Democrat,” Paul added. “So we believe in a presidency limited by the Constitution. I think that Donald Trump believes in no limits to power as long as it’s coming to him. That’s very, very worrisome to us.”

Paul said the GOP would regret it if they nominate Trump and that conservatives should be “alarmed” by his candidacy.

“I think he’s pulling the wool over our eyes and we’ll be very sorry that he’ll be the consummate dealmaker and he’ll be worse than anything we’ve got in Washington.”

“I think it’s showing some of the weakness of some of the front-runners and it may be good for some of the candidacies like myself,” said Paul. “I think Bloomberg sees Clinton on one side and the possibility of criminal charges. And on the other side he sees a bombastic Trump that alienates large segments of the population, Hispanics, women, etc.”

Rand underscored that pollsters have not been adequately looking at his support from college students and that he believes the race is wide open.

“I think, really, it also is an opportunity for some of us that are underdogs,” he added. “And one of the interesting things is that we think the polls are wildly inaccurate.”

Why the Search For Alien Life May Be Pointless

Mizzou Professor Who Blocked Reporters From Protest Charged With Assault