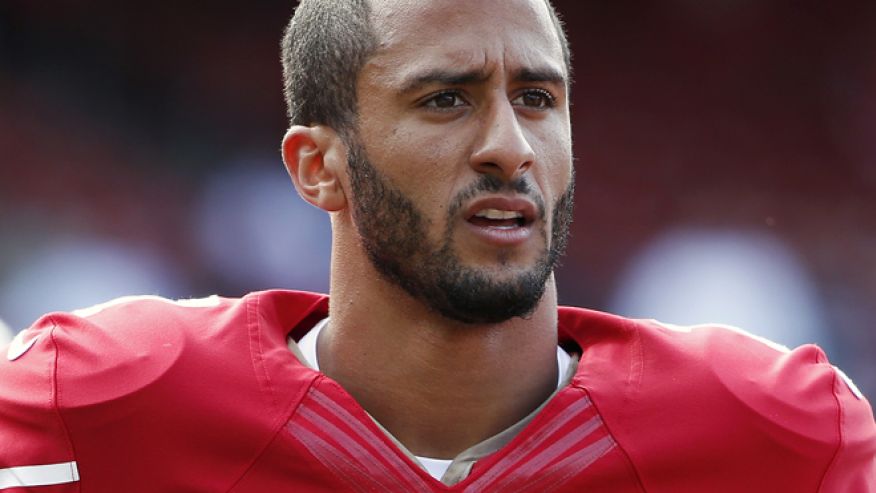 49ers Quarterback Wishes Not to Honor Anthem and Flag

San Francisco 49ers quarterback Colin Kaepernick elected not to stand for the national anthem prior to Friday’s preseason game against the Green Bay Packers. This is at least the second time he has engaged in such a peaceful protest. Kaepernick explained his demonstration, stating:

I am not going to stand up to show pride in a flag for a country that oppresses Black people and people of color. To me, this is bigger than football and it would be selfish on my part to look the other way. There are bodies in the street and people getting paid leave and getting away with murder.

The National Anthem is and always will be a special part of the pre-game ceremony. It is an opportunity to honor our country and reflect on the great liberties we are afforded as its citizens. In respecting such American principles as freedom of religion and freedom of expression, we recognize the right of an individual to choose and participate, or not, in our celebration of the national anthem.

As profiled by NFL.com, Kaepernick is far from the first and will likely not be the last athlete to protest injustices in this manner. Nonetheless, his behavior is likely to elicit heavy backlash from those who deem his silent statements “unpatriotic.” Mahmoud Abdul-Rauf of the NBA’s Denver Nuggets was suspended by his league for engaging in similar behavior in protest against the same problems Kaepernick has raised. Abdul-Rauf also stated that standing for the anthem conflicted with his Muslim beliefs.

Just a few weeks ago, Olympic gymnast Gabby Douglas received criticism for not placing her hand over her heart during the Star Spangled Banner, though this was not a concerted effort. She later issued an apology to those she may have offended.

Nonetheless, Kaepernick asserted that he did not request permission from his team or the league to engage in his abstention. “This is not something that I am going to run by anybody. I am not looking for approval. I have to stand up for people that are oppressed. … If they take football away, my endorsements from me, I know that I stood up for what is right.”

Kaepernick is entering his sixth season in the NFL, all with the 49ers. He led his team to Super Bowl XLVII in 2013, though the team fell to the Baltimore Ravens. He was born in Milwaukee in 1987 to a white mother and a black father, but was put up for adoption and then raised by two white parents.

Most libertarians will acknowledge Kaepernick’s right to peaceful protest. Beyond general agreement with his premise of police brutality against minorities, the liberty movement is very skeptical of worship of flags and other state symbols more generally. Much like the pledge of allegiance, this marks a serious division between conservatives and libertarians. While the former group values “patriotism” and some degree of obedience to authority, libertarians favor more individualism and skepticism.

The Star Spangled Banner has become a staple prior to sporting events since World War I. The song was played in large part to create national unity. Its modern run as a regular pre-game ritual traces back to game one of the 1918 World Series between the Boston Red Sox and Chicago Cubs, which took place at Comiskey Park in Chicago.

During the game, a military band played the song during the seventh-inning stretch. The idea caught on for the remaining games of the series. Eventually, it became commonplace for the next decade during the World Series and holiday games, before becoming a regular during all games. Congress officially adopted the Star Spangled Banner as the national anthem in 1931.

While it may not be that Kaepernick is a libertarian or a Gary Johnson voter, his stance for individual thought will likely receive the support of most in libertarian circles. Though he is sure to receive blowback from fans and perhaps even the NFL, he is simply exercising his First Amendment rights to not engage in a certain form of expression.