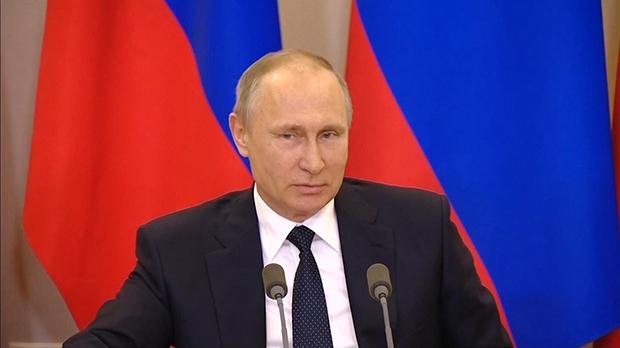 Russian President Vladimir Putin said Wednesday he is prepared to hand over records of President Donald Trump’s meeting with Russian officials earlier in May.

The Russian leader announced that he can provide the House and Senate with transcripts of a conversation between Trump and Russian Foreign Minister Sergey Lavrov, reports the Associated Press. Trump is alleged to have shared highly sensitive intelligence about an ISIS plot to attack commercial aviation during the talks.

BREAKING: Putin says Russia is willing to hand over to US Congress, Senate records of Trump's talks with Lavrov.

The president of #Russia adds that "political schizophrenia" is gripping Washington. https://t.co/ZoZK02CbMC

Some intelligence officials believe the disclosures may have endangered a key intelligence source involved with the fight against ISIS, according to a Washington Post report that was confirmed by the The New York Times Monday evening.

The Trump administration has denied accusations that the intelligence disclosure was improper. National Security Advisor H.R. McMaster called the WaPo report “false” and told reporters Tuesday that the president’s conversation with Lavrov was “wholly appropriate.”