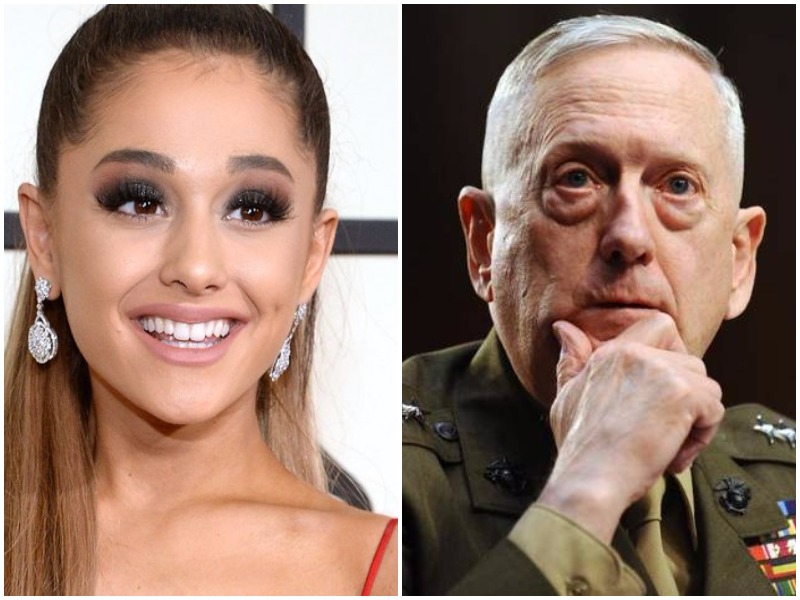 At least one national media contributor thinks professional singer Ariana Grande, not Secretary of Defense (DOD) Jim Mattis, is the leader America needs to win the war on terror.

The Nation contributor and University of Michigan history professor Juan Cole published an article Wednesday centered on Grande and how the Department of Defense could learn a thing or two from the 23-year-old Nickelodeon alum.

Even for skeptics of the Trump administration, this assertion is a bit of a stretch. Cole accuses Mattis of underestimating our enemy and feels it is pointless to wipe out terrorists because it would only turn their families against the U.S.

“He seems to think that a few slick tweets or videos in cyberspace are the problem,” writes Cole. “The fact is that all the ISIL fighters in Iraq and Syria have siblings and cousins, and simply annihilating them creates a whole slew of new feuds with the United States.”

Cole then proposes that the public ignore the government and embrace Grande’s method of outreach and tolerance. Cole is no stranger to this type of controversy as this isn’t the first time he’s said something head scratching.

In 2015, he went on record stating that Islamophobists and outspoken right-wing Jews were responsible for inspiring Dylann Roof, the Charleston shooter, to carry out the massacre. He is just as quick to condemn Mattis in his new piece.

Cole maintains that Mattis’ way of doing things will burn civilization to the ground. When writing on Mattis’ policy of annihilation, he describes it as “sort of like fighting forest fires with gasoline hoses.”

Cole’s critiques aside, it’s hard to compare a sitting cabinet member in the White House to a young entertainer in their 20s. Mattis enlisted in the Marine Corps at the age of 18 and was commissioned as a second lieutenant in 1971.

For over four decades he commanded Marines at every level and lead an infantry unit into Iraq in 1991. He later lead troops into the Middle East post-9/11 and has been tapped for several prominent positions in the DOD, most notably Secretary of Defense.

Grande is a Grammy winner who has had moderate success on television and enjoys popularity on social media.

Towards the end of the story, Cole singles out Grande’s social media accounts as a source of inspiration, and shares a post she wrote on Twitter last Friday. She says she is returning to Manchester for a benefit concert to honor the bombing victims.

She also thanks her fans for their compassion and love and encouraged them to stand united and not let terror triumph.

Admirable as that sentiment is, those feelings and words don’t translate into workable foreign policy or a strategy for defeating ISIS.

Mattis on the other hand is known for being one of the most well read, deep thinking military men in all of Washington. He has even been called the “Warrior Monk” for his calm demeanor and extensive experience. To compare the two on foreign policy is not accurate, or fair.

Cole had one last piece of advice for the Pentagon, saying he hopes it starts following Grande’s Twitter feed, “Because she nailed it.”