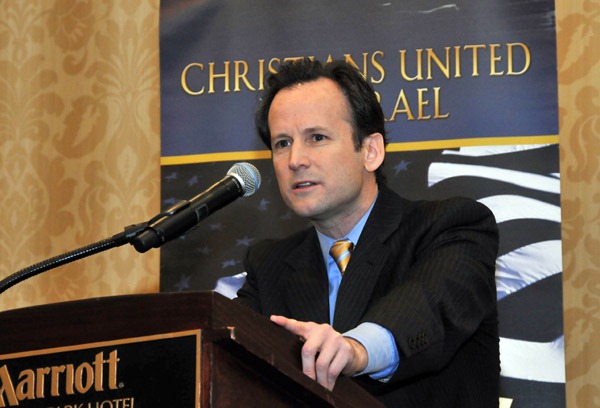 David Brog, a pro-Israel activist and attorney, blasted college students for favoring narratives and “subjective feelings” instead of facts.

Brog, author of “Reclaiming Israel’s History: Roots, Rights and the Struggle for Peace,” addressed this tendency, the Israeli and Palestinian claims to land, and what he called the left’s preference for viewing the world “in terms of race”  in a Sunday email Q&A with The Daily Caller News Foundation.

Read the lightly edited Q&A below:

1. What inspired you to write this book? How did your diverse career experiences with America Online, the United States Senate, and the Maccabee Task Force shape your view of Israel?

When you visit a campus these days, you arrive in an alternate universe where so many of the facts about Israel (and America, Western civilization, etc.) are obscured by a disparaging “narrative.” Things are so bad that even Israel’s advocates have forgotten many of the critical facts that vindicate Israel and inspire support for her struggle.

But there’s a tendency in the pro-Israel community to overreact, to assume critical inquiry is dead, and to replace robust advocacy on the issues with feel good nonsense that avoids the issues. My experience has consistently demonstrated the opposite. Most people – including students – are still open to learning the truth and will change their opinions when they do so. When we challenge the prevailing anti-Israel narratives with the actual facts, we win.

I wrote my book to bring the most powerful and important facts about Israel’s history together in one accessible, chronological volume. In the process, I’ve reclaimed many of the most compelling episodes and stories that have been left out of the standard case for Israel. The story I get to tell – Israel’s story – is not only fascinating, it’s quite convincing.

2. You suggest in the introduction of “Reclaiming Israel’s History” that Westerners increasingly gravitate toward the concept of “narratives” instead of truth vs. lie. How does this tendency affect the portrayal of the Israel-Palestine conflict? Do you see this preference for different accounts over sheer facts characterizing any other contentious issues today?

College students are obsessed with “narratives” and subjective feelings. They actually bristle at terms like “truth” and “lies.” The most popular of these narratives denigrate Israel, America, Western civilization, and even white people. I’ve actually had students tell me that if we want to produce pro-Israel social media we must never feature white people as advocates since whites have so little credibility on campus. The days of judging people by the “content of their character” are a quaint memory.

But again, I don’t want to overestimate this threat. The hard core of students pushing these narratives are a distinct minority on campus. This minority has an outsized influence only because we’ve let them spread their myths unchallenged. When we push back against these false narratives the right way, we can win back minds and even hearts. Facts are stubborn things indeed.  (RELATED: Anti-Israel Students Tried To Shut Down Event Hosting Israeli Veterans [VIDEO])

3. Are there any institutions that you find especially culpable in misrepresenting Israel and its struggle? Do you think that the Israel-Palestine struggle is uniquely vulnerable to such distortion? Why or why not?

Progressive institutions present the greatest challenges today. The left likes to see the world in terms of race. So Israel’s detractors have insisted on portraying Israel’s conflict with the Palestinians as a battle between white colonial settlers (the Israelis) and an indigenous people of color (the Palestinians). Not knowing better, progressives are buying into this anti-Israel myth. This means we’re losing the campuses. Even more significantly, this means we’re losing the base of the Democratic Party.

When you talk about an Israeli, you’re typically talking about someone whose roots in the Middle East predate the birth of Islam and whose parents or grandparents fled Muslim oppression. These truths empower us to claw back territory on the left.

4. Can you synopsize the arguments of history and demography which respectively form the crux of the Israeli and Palestinian claims to land? Which do you find more compelling?

Let me lay out the arguments before taking sides.

The Israelis argue that Israel is the land in which the Jewish people were born and in which they were autonomous for centuries. They note that there was always a Jewish presence in this land, and they stress that this is the only place on God’s green earth where the Jews have a right to self-determination. So the Jews claim a historical connection that trumps any demographic deficiencies at the beginning of the Zionist project.

The Palestinians argue that they are the indigenous people of the land. They claim that the Jews are outsiders with some religious ties to the land, but no right to self-determination in it. When other Arab nations received their independence from foreign rule, the Palestinians should have been allowed to create an independent Arab state. But British rule and Jewish immigration prevented that. So they stress demography – the fact that they were the majority when the Zionist project began – over history.

I’m a strong supporter of Israel. Israel’s “narrative” has the advantage of being based on objective fact. In fact, the ties between the Jewish people and the Land of Israel are far stronger than is commonly perceived. The Jews have clung to their native land even through the worst of the Muslim persecutions. Jews have constantly flocked back to this land whenever local despots and conditions permitted. And the most recent wave of Jewish return in the early 20th century did not displace Arabs, it sparked an Arab population boom as Arabs immigrated —  and in-migrated — to the Jewish parts of the country. Unless you would deny the Jewish people the right to self-determination, the creation of the State of Israel was an act of profound historical justice.

As for the Palestinians, there’s certainly some truth in their narrative. But it’s also rife with myth, exaggeration and anachronism. Yes, there were Arabic speakers living in the land when the most recent wave of Jewish return began. These Arabs were entitled to full human and civil rights. But neither they nor any other people are entitled to national rights – the right to self determination – until they’ve developed a national consciousness. This Palestinian national awakening didn’t happen in earnest until after the 1967 War.

The fact that the Palestinians are a new people does not negate their national rights. But it puts these rights into context. And it clarifies that the Jews did not return to someone else’s land and steal it. They returned to a land in flux and staked their very substantial claim at a time when there was no other people group doing likewise. It’s hard to blame the Israelis for failing to recognize a Palestinian people before the Palestinians themselves had done so.

5. As described in your book, a common feature of political interactions between the Israelis and Palestinians seems to be the persistent refusal of Palestinian officials to compromise. Why is this?

When the modern wave of Jewish return to the Jewish homeland began in the late 1800s, the leaders of Palestine’s Arabs chose an extreme path. Rather than recognize Jewish rights in the land and seek to compromise, they decided to deny any Jewish connection to the land and reject any Jewish claims to it. They also murdered any Arab leaders who chose a more accommodating path. Thus Palestinian Arab identity has been based upon the complete denial of Jewish rights in the land. This does not bode well for compromise.

Say what you will about the Israelis, most of them are taught that there were other people living in this land when the Zionist movement began. They are taught that these people have rights, including national rights. This created generations of Israelis who understood and internalized the need for painful compromises for peace. It is only the repeated rejection of such compromise – often quite violently – that has convinced many Israelis that their concessions won’t bring peace but will only encourage and enable more terror.

6. How can education regarding the Israel-Palestine conflict be introduced or modified to more accurately inform students?

We’ve lost academia. The Saudis and others hostile to Israel have invested millions to dominate the most important Middle Eastern Studies departments. While we need to engage on the academic front, we won’t see much truth coming from there any time soon. So the education must come from elsewhere. Luckily, most students get their information from multiple sources including media, social media and their fellow students. Those of us who are dedicated to the truth must continue to write and speak, and to make the truth available through all of these other means at our disposal.

7. From your work combating BDS movements on campus with the Maccabee Task Force, have you noticed a certain pro or anti-Israel trajectory of the conversation among millennials? How has the dialogue changed or remained the same, both in terms of subject and tone?

I see one pattern repeated over and over. Students – both Jewish and non Jewish – are increasingly in the thrall of this dominant anti-Israel narrative. As a result, many Jewish students are becoming anti-Israel activists. The rest are cowed into silence or a guilty, embarrassed support for Israel. As for non-Jews, the large majority simply leave campus with some vague but less personal concerns about the Jewish state. (RELATED: Students Demand Divestment From ‘Problematic Companies’ That Trade With Israel)

Most of these students are not invested in the anti-Israel narrative – they believe it because they’ve never heard any facts to the contrary. When confronted with the truth, all but the most ideological respond. Once we teach them the basic facts about Israel, many Jews feel new permission to support Israel. And many non-Jews develop a real sympathy with this nation that has built a moral, technological and cultural oasis in a desert of intolerance. There are few more compelling stories that can be told than Israel’s. We just need to tell it.

Report: Trump Under Investigation For Obstruction Of Justice

How It Happened: The Baseball Shooting, According To The Congressmen Who Were There