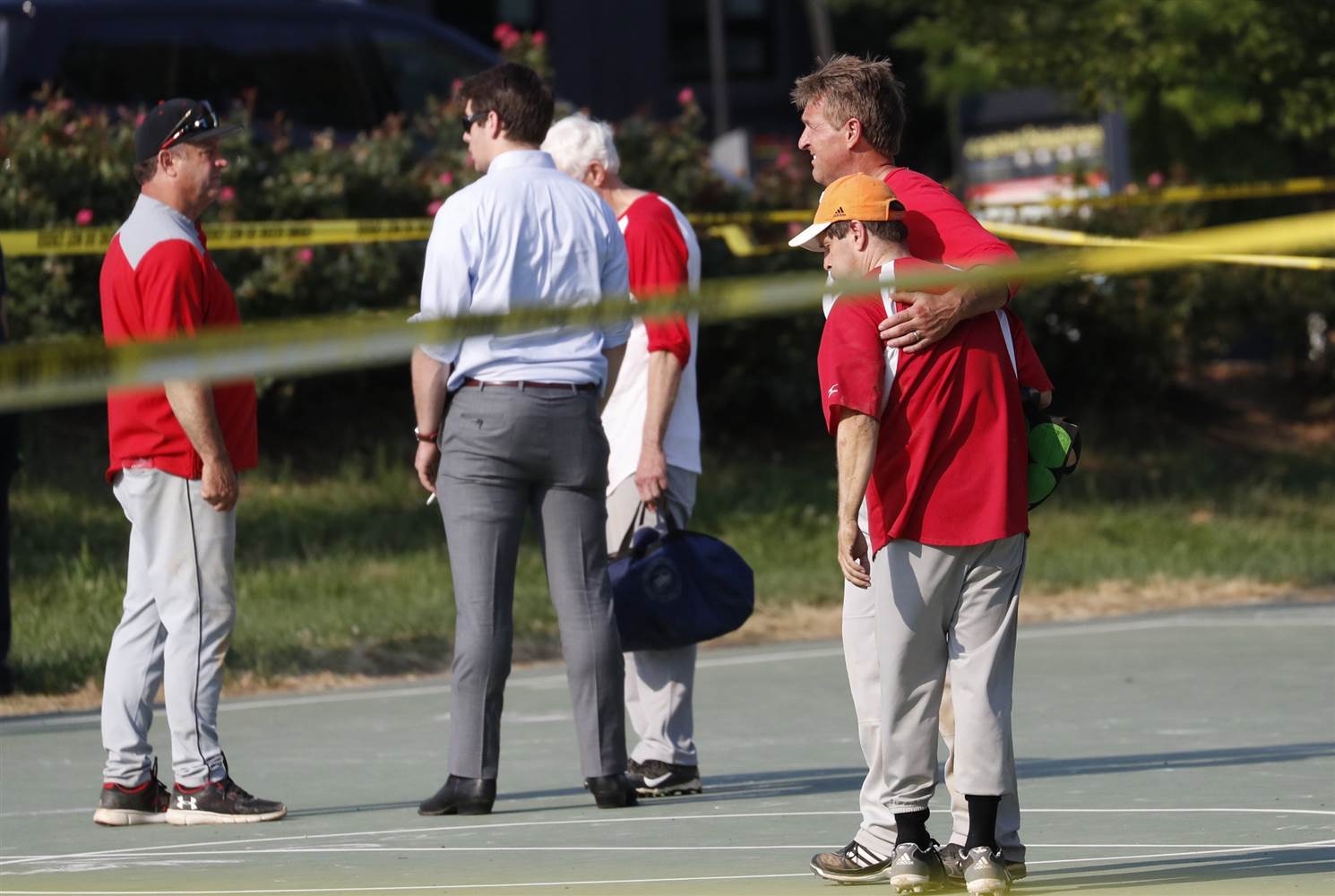 After completing their turns at bat around 7 a.m., GOP Reps. Ron DeSantis of Florida and Jeff Duncan of South Carolina decided to duck out early when a man approached them and inquired about the team’s party affiliation as they went to leave in their cars and head to Capitol Hill.

“I did have an interaction with someone in the parking lot who asked me if the team practicing was a Democrat or Republican team. I told him they were Republicans,” Duncan told reporters. “He said, ‘K, thanks,’ turned around. I got in the car and left and found out my Republican colleagues were targeted by an active shooter.”

Duncan confirmed the man fit the police’s description of 66-year-old James Hodgkinson, who minutes after speaking with the two walked toward a chain-linked fence by the third base dugout where he fired his first shot out of his rifle.

According to Georgia Rep. Barry Loudermilk, who took cover behind a shack by the dugout, there was a long pause after the first shot before someone yelled,”He’s got a gun.”

“Then the second shot happens and Trent [Kelly] said he actually brought his rifle up stuck it through the chain fence and started shooting,” he told reporters. “So we’re running away from that apparently when [Mike] Mika got shot leaving the field, Scalise was hit within probably the first two or three shots. Like I said, when I was running you could hear the bullets. They were mounting, dust was flying up off the ground.”

According to Duncan, the shooter first aimed at Kelly who zig-zagged across the field as shots continued to be fired but missed before hitting Scalise.

Lawmakers described seeing Scalise — who was shot in the hip — scream in pain, trying to drag himself out of harm’s way as lawmakers helplessly looked on, waiting for gunfire to cease.

Loudermilk said they saw Mike Mika, a Tyson’s food lobbyist and former congressional aide, had been shot in the torso, but as lawmakers and staff tried to help they could hear more shots being fired.

The two members of Scalise’s security detail — Special Agents Crystal Griner and David Bailey —  exited their black SUV to fire back at the shooter, who was later pronounced dead at the hospital. Lawmakers said despite Bailey sustaining an injury and Griner being shot in the ankle, both continued to fire back at Hodgkinson until they were finally able to take him down. Alexandria police soon arrived on the scene to assist the Capitol police as the gunman switched from a rifle to a pistol.

According to Barton, Jack was able to hide under a car while his older son took cover in the dugout.

“He had 25 dads. Everybody out there was looking out for him, not just me,” he said.

As the shootout was taking place, Rep. Mo Brooks and another member were able to assist Zack Barth, a staffer for Rep. Roger Williams.

“One of them was wounded in the leg,” he told CNN. “Took off my belt and myself and another congressman, I don’t remember.”

Lawmakers said the Capitol Police acted as heroes. They added that as a member of leadership, Scalise is assigned those officers. Without that detail, the situation could have been much worse.

“Had they not been there it would have been a massacre, because there’s no escaping a guy, you know if he’s got several hundred bullets, and we had no weapons and no place to hide,” Kentucky Sen. Rand Paul told NBC. “So if he would have advanced on the rest of us, there would have been no chance. The only chance we had was that the shots were returned by the Capitol Hill police.”

While GOP members said they are shaken by the events, the game will take place Thursday as scheduled. Proceeds of the game will go to The Boys and Girls Club of Greater Washington and the Fallen Officer Fund.

“You know, we need to do this for those guys, and it’s for the children,” Loudermilk said. “And I think we need to go ahead, and we need to play the game. Of course, there’s going to be a lot of security, and you know if this was just for us for recreation, I would say no. This whole thing is for those children, and they shouldn’t have to suffer because of the idiocy of some evil perpetrator.”