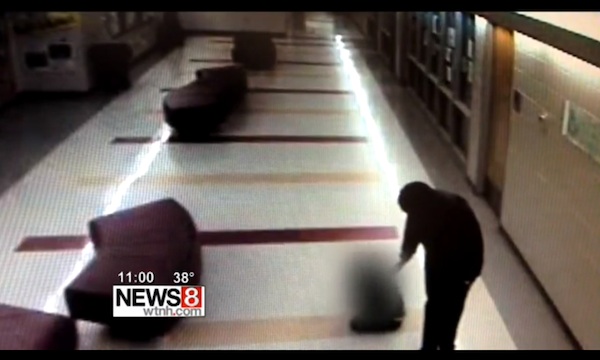 BRIDGEPORT, CT–A disturbing video has been made available to parents of students at Jettie Tisdale Elementary in Connecticut. Principal Carmen Perez Dickson can be seen on camera dragging two kindergartners through the halls on separate occasions.

“She drag my daughter like she was some type of animal,” said Nakeya Hargrove, the mother of one of the children.

Even though the principal committed this abuse back in the spring of 2012, it’s only being brought to light now as the students were too afraid to come forward.

“She didn’t really want to go to school,” Hargrove said. “She was probably afraid of the principal after the incident.”

Parents were clueless until they were notified by the Department of Children and Families. After multiple videos surfaced, the school superintendent suggested firing Dickson. The board, for unfathomable reasons, decided against it, and instead Dickson was put on suspension. Once her suspension is over, she could continue working as a principal at a different school.

“I feel she should’ve gotten fired. The Bridgeport Board of Education saw it and they should’ve fired her,” Hargrove said.

“She does not need to be working anymore. I am appalled at what’s going on and we are going to handle it,” she said.

Thus far, Dickinson has only been ordered to take anger management classes. Watch the footage of her deplorable actions below.