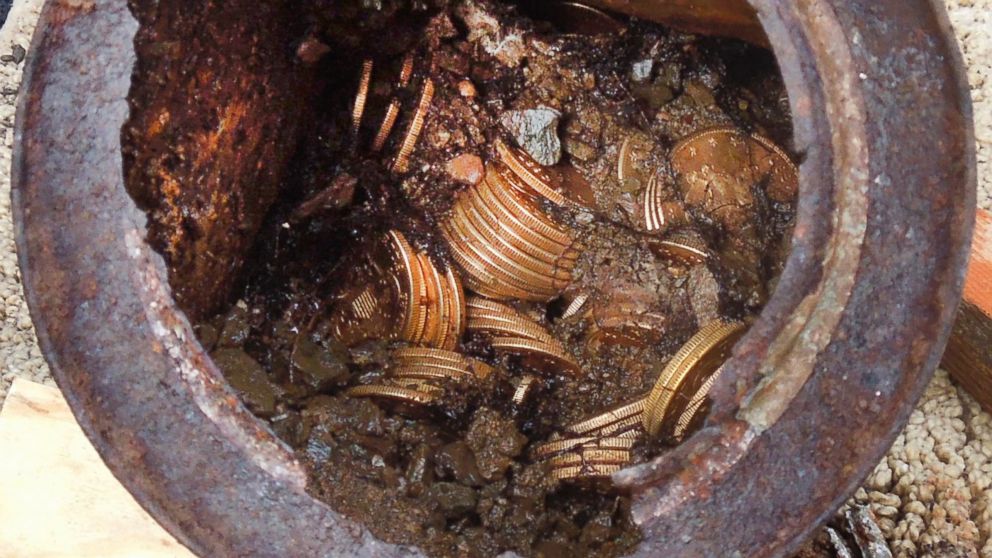 An anonymous California couple in Gold Country found $10 million worth of gold coins in rusty cans buried in the the hollow of an old tree. The find, nicknamed the Saddle Ridge Hoard, could be the largest treasure find in U.S. history.

The 1,427 coins found date from 1847 to 1894 and are said to be in mint condition, having been uncirculated. They’ve been professionally graded and authenticated with a face value adding up to about $27,000 a piece, but rare coin experts believe that each could fetch nearly $1 million.

“I don’t like to say once-in-a-lifetime for anything, but you don’t get an opportunity to handle this kind of material, a treasure like this, ever,” said veteran numismatist Don Kagin to the AP. “It’s like they found the pot of gold at the end of the rainbow.”

The couple is remaining anonymous in order to not spark a gold rush to their property, also they don’t want their neighbors to look at them any differently now that they’re millionaires.

“Their concern was this would change the way everyone else would look at them, and they’re pretty happy with the lifestyle they have today,” Chief Numismatist of Kagin Inc. David McCarthy said.

The coins are reportedly in denominations of $5, $10, and $20 and were stored in chronological order in the cans. The methods used to categorize them indicate that whoever put them there was using the ground like a bank and that they weren’t just stashed there by a robber.

The coins apparently had been buried along a path that the couple had walked for years. They found them last spring when the woman bent over to look at an old rusty can that had popped out of the ground after some erosion.

“Don’t be above bending over to check on a rusty can,” the woman reportedly said.

Man Teaches Gun Safety By Shooting Himself In The Head (VIDEO)