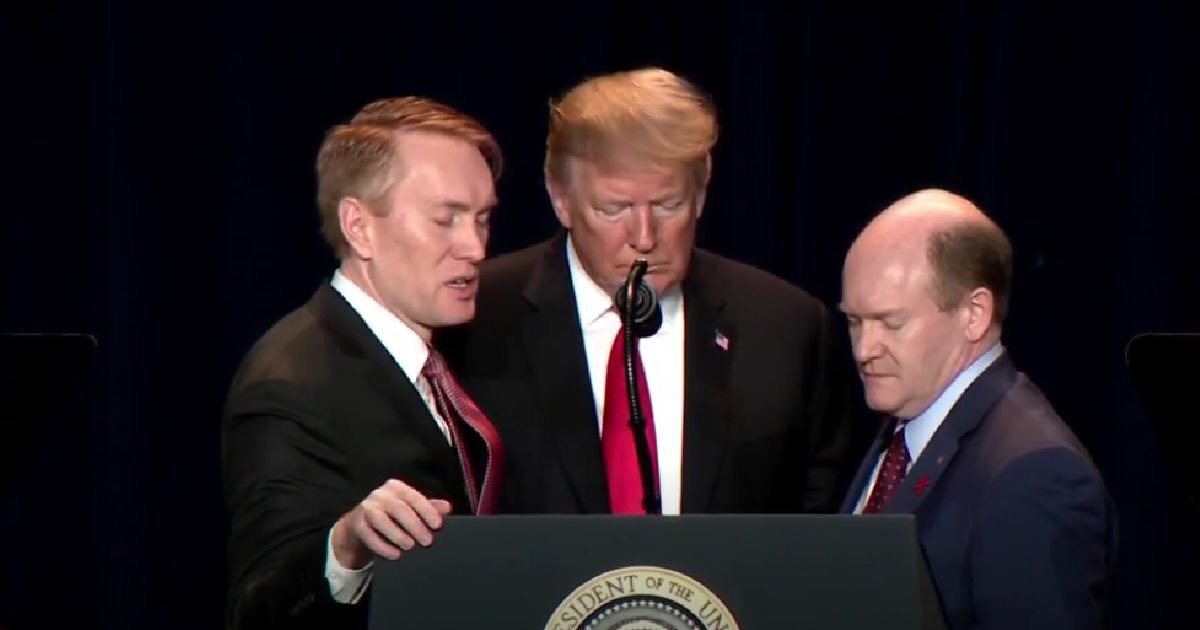 If you watch much of the mainstream media today, they would have you believe that both sides of the political aisle are at each other’s throats 24/7 – and there’s a good possibility you might have missed a great show of unity and compassion that took place at the National Prayer Breakfast on Thursday.

A photo and video is circulating on Twitter of Senator Chris Coons (D-DE) and Senator James Lankford (R-OK) at the annual National Prayer Breakfast, praying for and with President Donald Trump. The moment caught on video seemed very sincere and full of compassion as the two senators joined hands with the president to pray for his well being and that of our country.

“Mr. President, if you would allow us, every single week in the Senate we close our prayer time by standing together and praying for each other, and if you’d allow Chris and I to do that we’d like to be able to do that for you today”, Lankford said before opening the prayer. Both men then embraced the president and Lankford prayed.

Coons continued the prayer, “Heavenly Father we pray for all who are in positions of responsibility and authority, and all who seek a closer relationship with you. This morning, we especially pray for President Trump. We ask that your wisdom and your blessing and your peace would be upon him and his family as they serve us, and that today you would touch his heart and all those who have been with us at this National Prayer Breakfast. In Jesus name we pray.”

All three men concluded the prayer with an ‘amen’ and shook hands to the applause of the crowd.

Senator Coons later posted a picture of the three men praying at the event, describing how much it meant to him, and that although he doesn’t agree with the president often he does pray for him regularly.

He unapologetically defended his actions to his detractors on Twitter saying, “In front of thousands of people at the event and many more watching at home, I prayed that God would grant President Trump wisdom, grace, and peace.”

“Look, I know that many Delawareans dislike and disagree with the President and that many others support him passionately. My commitment – and my prayer – is to try my best each day to work with Democrats, Republicans, & the President to get things done for the people we represent.”

“Sometimes, that means working together on bipartisan legislation.” He continued, “Sometimes, it means fighting with everything I’ve got to stop the President or the Administration from doing something I believe is wrong.”

“And sometimes, even when it’s difficult, it means joining hands in prayer or reflection to remind ourselves that as public servants, we share the same obligations to do what’s best for the country we all love”, Coons said.

This show of love and compassion of two senators from opposing parties for our country, each other, and our president is a heartwarming display of who we truly are as Americans. We may disagree with one another over policy issues, and those debates might, and at times should, be passionate, but we can’t allow differences to cause us to dismiss one another’s humanity. This display at the National Prayer Breakfast is a reminder to us all of the general good in the hearts of Americans.