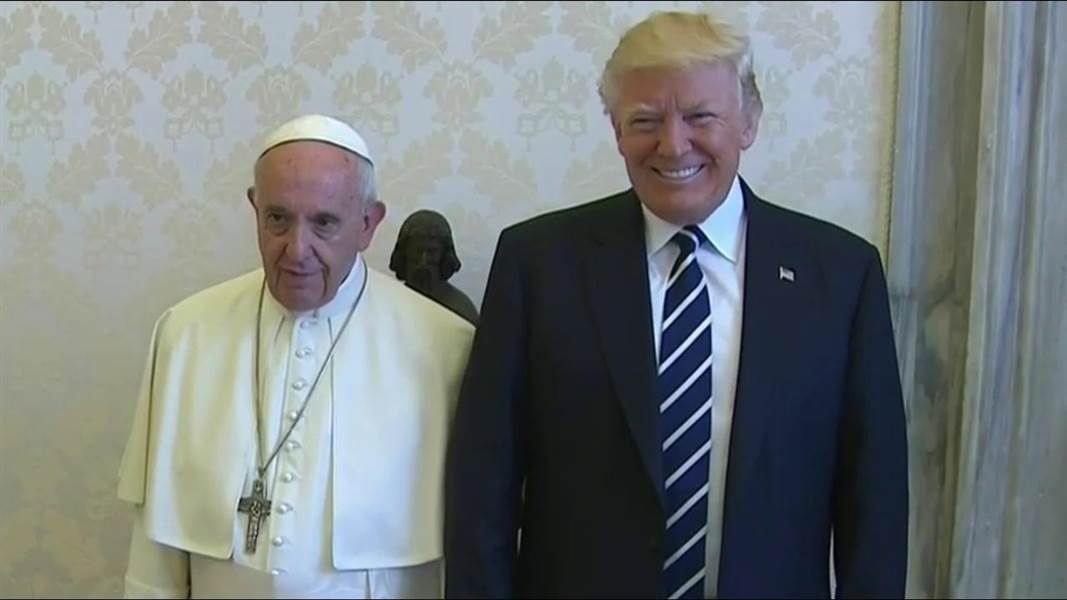 Pope Francis gave President Donald Trump a copy of his encyclical that refers to Earth as an “immense pile of filth” and calls for phasing out fossil fuels to fight global warming.

Francis gifted Trump with his 2015 letter “Laudato Si” during their half-hour meeting Wednesday, Bloomberg reported. The Pope intended for his gift to bolster calls for Trump to not withdraw the U.S. from the Paris climate agreement.

Trump promised to withdraw from the Paris Agreement on the campaign trail, but European leaders — and some in his own White House — are urging the U.S. president to stick with it. Leaders of G7 countries are expected to lobby Trump on the issue when they meet him in Italy this week.

Francis says he would not “proselytize” during his meeting with Trump, but at least one Bishop believed that the pontiff could “convert” Trump on the issue of global warming.

“They will come to an agreement, since the president claims to be a Christian, and so he will listen to him,” Bishop Marcelo Sánchez Sorondo, the chair of the Pontifical Academies of Science and Social Sciences, said ahead of the meeting.

No doubt, European leaders hope that the Pope’s encyclical on global warming will convince Trump to stick with the Paris agreement.

“Thank you, thank you,” Trump told Francis as he left the meeting. “I won’t forget what you said.”

G7 leaders expect Trump to issue a statement this week on whether or not he will keep his campaign promise to ditch the Paris agreement.

The Pope’s 2015 encyclical called global warming “one of the principal challenges facing humanity in our day” that will be felt across the world for decades.

“There is an urgent need to develop policies so that, in the next few years, the emission of carbon dioxide and other highly polluting gases can be drastically reduced, for example, substituting for fossil fuels and developing sources of renewable energy,” Francis wrote.

“Worldwide there is minimal access to clean and renewable energy,” Francis said in his letter.

Environmentalists celebrated the letter, which came out about six months before UN diplomats met in Paris to hash out the Paris agreement.

Nearly 200 nations backed the agreement, and it went into effect in 2016. President Barack Obama committed the U.S. to cut greenhouse gas emissions 26 to 28 percent below 2005 levels by 2025.

Trump told supporters he would “cancel” the Paris agreement, and has issued executive orders to rescind most of the policies the Obama administration put in place to meet its Paris pledge.

Conservative groups want Trump to keep his promise to withdraw from Paris, arguing that Trump should send it to the Senate as required by the U.S. Constitution. The Republican-controlled Senate has already promised to vote down the deal.

Wasserman Schultz Interfered With Criminal Probe Of Her IT Staffer, Promising ‘Consequences’ For Capitol Police