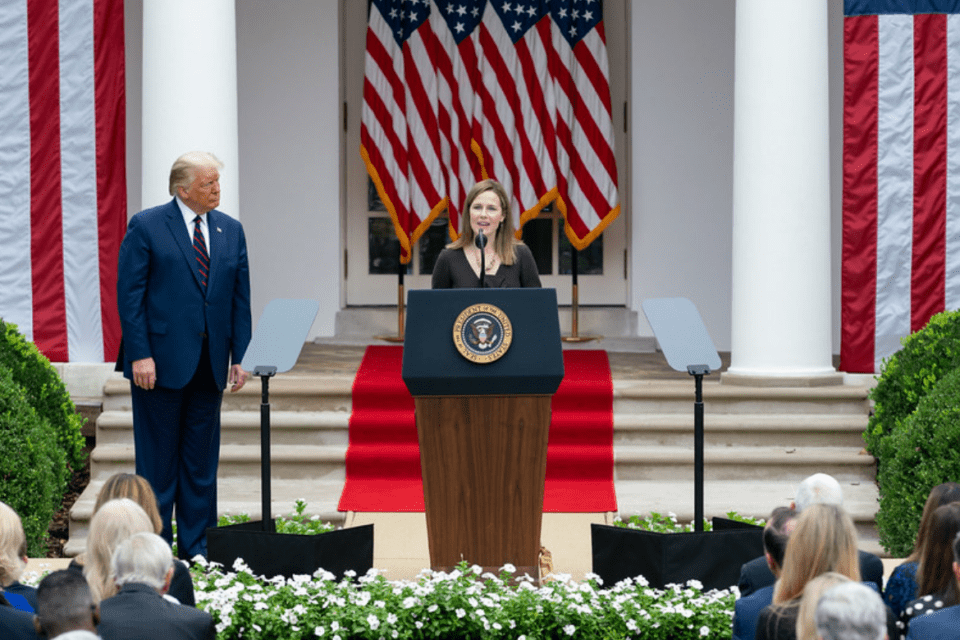 Say goodbye to our Constitutional Republic and hello to the Holy American Empire. President Donald Trump has done it, and his nomination of Amy Coney Barrett for the Supreme Court is the evidence!

That’s the sentiment you have seen if you’ve read any of the mainstream media coverage of Donald Trump’s pick for the third SCOTUS nominee of his administration.

Progressives have had an absolute meltdown over the idea of having a third conservative justice on the nation’s highest court. What in the world has the left losing their minds, you ask? Barrett is pro-life and a devout Catholic, which has lefties on the verge of a nervous breakdown as they fear that this could be the deathblow to both Roe vs. Wade and Obamacare.

The leathery claws of the Social Justice Left have already attempted to dig into Barrett, trying to paint her as a Christian with a personal mission to secure her seat as a justice on the court so she can take steps to transform America into a Catholic theocracy. And now, Barrett stands accused of being a racist. How do her accusers substantiate their claims? Brace yourself. Amy and her husband Jesse adopted two black children from Haiti, allegedly to use as “political props.”

Yes, that is correct. Ibram X.Kendi, a Professor of History at Boston University, suggested that Amy’s family adopted black kids to safeguard themselves from accusations of racism.

In reality, what is happening is that the left is getting their triggers flipped because they despise the idea of a pro-life woman who happens to be a devout Catholic occupying a seat on the Supreme Court of the United States. In the mind of a statist, the only god that exists is the god of the State, and anyone with a devotion to any other God or idea apart from that of the State should be branded an apostate and destroyed. That is why progressives seek to paint a narrative that President Trump’s choice for the third Supreme Court justice is a racist theocrat for not being a judicial activist who seeks to make law from the bench and allow the slaughter of unborn children.

If she were a lefty, progressives would praise her for being a true humanitarian for adopting children of another ethnicity—but because she’s pro-life, she’s racist? I can smell that load of garbage miles away!

There’s no law that says a potential justice must forfeit his or her religious convictions in order to serve on the Supreme Court of the United States. The First Amendment of the Constitution states:

“Congress shall make no law respecting an establishment of religion, or prohibiting the free exercise thereof; or abridging the freedom of speech, or of the press; or the right of the people peaceably to assemble, and to petition the Government for a redress of grievances.”

It doesn’t matter what religion a representative of the U.S. government does or doesn’t practice; what matters is said person upholds our constitution, which places strict limits on government involvement in the lives of American citizens. Judge Barrett claims that she would be a justice in the same school of thought as the late Antonin Scalia. The radicals shudder at the thought of interpreting the constitution as it was originally written, rather than as a living breathing document that must change with the times in which we live. Interpreting the constitution as it was written would restore the balance of power, and that has statists’ heads exploding as it throws a monkey wrench in their ultimate plan to seize total control and power.

When it comes to matters concerning individual liberty, a Supreme Court Justice’s personal views shouldn’t matter in the slightest, no matter how far left or right. The focus should instead be placed on an individual’s qualifications for the job and how he or she will interpret the constitutionality of a law.

If Barrett rules in the tradition of Scalia, she will be far from a theocrat, but will be a saint for those of us who care about the balance of power rather than being coerced to worship at the altar of the State. In the meantime, sit back and watch progressives have a meltdown over a potential Justice ACB as easy as 1,2,3!

How Many People Die from Truck Accidents?