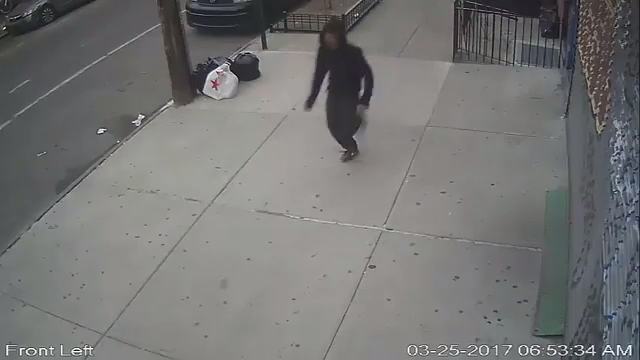 The surveillance video reportedly shows the moments after he tried to expose himself to her, reports NBC 4 New York. In the video, the man believed to be the assailant is seen running away early last Saturday morning.

The man crept into the woman’s apartment by climbing up the fire escape into her window early Mar. 25, according to the New York Police Department. The man allegedly exposed himself to the woman as she was waking up.

He attempted to get into bed with her, but the woman was able to fight him off as she screamed for her roommate, according to police. He ran out of her room, crossing paths with her roommate as he left.

Police are now searching for a man between 18-22  with black hair and brown eyes. The NYPD is in the process of creating a sketch of the alleged suspect, they announced Thursday.

The surrounding community is fearful in light of the attempted assault.

“I’m definitely going to lock both my locks, that’s for sure. I’m glad I have gates on my building,” Natalie Gomer, a neighbor, said.

A male resident cautioned people to keep their windows closed, as more people keep them open as the weather warms up.

“You have to keep your doors and window locked and be conscious of your own safety in your own home,” Brian Abbott, a local resident, proposed.

Native Hawaiian Activists Could Force $1.4 Billion Telescope Out Of US