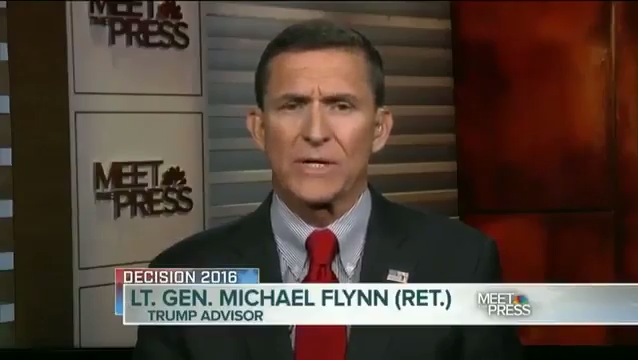 Mike Flynn has offered to tell the FBI and congressional intelligence committees investigating Russia what he knows in exchange for immunity, but so far he has had no takers.

Flynn resigned in disgrace 23 days into his stint as National Security Advisor, after the public found out he was less than honest with Vice President Mike Pence about a conversation he had with a top Russian diplomat in December. Prior to taking that post, he served as a top foreign policy advisor to then-candidate Donald Trump.

Subsequent to his resignation, it was discovered that Flynn had conversations with Russian Ambassador Sergey Kislyak about U.S. sanctions on Russia before Trump took office. He also registered as a foreign agent with the Justice Department on March 8 for $530,000 worth of lobbying work before election day, which may have benefited the Turkish government.

With that experience in tow, Flynn could potentially shed light on several aspects of the Trump campaign, from his softening of language on Ukraine in the RNC platform, to the degree with which the Trump camp supposedly did or did not “coordinate” with Russia on the hacking operation — the heart of the investigation.

So why hasn’t anyone taken him up on his offer (yet)?

“General Flynn certainly has a story to tell, and he very much wants to tell it, should the circumstances permit,” Flynn’s counsel Robert Kelner said in a statement Thursday. “Out of respect for the Committees, we will not comment right now on the details of discussions between counsel for General Flynn and the House and Senate Intelligence Committees, other than to confirm that those discussions have taken place. But it is important to acknowledge the circumstances in which those discussions are occurring.”

Kelner’s statement did not offer any details as to the exact nature of the circumstances. The House Permanent Select Committee on Intelligence has denied Flynn made them an offer, according to committee spokesman Jack Langer.

“HPSCI had a preliminary conversation with Michael Flynn’s lawyer about arranging for Flynn to speak to the Committee. The discussions did not include immunity or other possible conditions for his appearance,” Langer told The Daily Caller News Foundation.

The Senate Permanent Select Committee on Intelligence reportedly turned down the offer.

The FBI had no comment when asked by TheDCNF if it had received an immunity offer from Flynn.

Flynn’s motives for offering to testify in exchange for immunity are unclear. It’s possible he wants to collaborate because an investigation could implicate him, or that he simply wants to aid in the investigation itself. It’s also possible he’s frustrated with the White House over the circumstances of his resignation.

On the other hand, the case could be in its infancy, and the authorities may want to further the investigation before making a deal.

“I’d equate an ask for immunity as an opening move in a chess match with the government,” Ron Hosko, former FBI assistant director and current president of the Law Enforcement Legal Defense Fund, told TheDCNF. “It suggests to me he may have something to offer but also senses he is at risk of prosecution.”

“I’m guessing he/counsel think there are violations of the law the [government] will be able to prove and they’re looking for good options that don’t involve a conviction,” he said.

The FBI doesn’t unilaterally give offers of immunity, according to Hosko. That is the job of the prosecutor who, in conjunction with the FBI, would weigh the strength of the current case against Flynn with others that he could potentially implicate, with what new information he could offer, and with what the prosecution could lose by giving him immunity.

“You may lose the prosecution against the top person with culpability,” Hosko told TheDCNF, indicating Flynn could be the biggest fish the investigation catches. “They may look bad for the [government] because you’d typically consider immunizing lesser subjects to get higher level subjects who you need the testimony of the immunized party to convict.”

Kelner defended his client in his statement, noting that the media has been “awash with unfounded allegations, outrageous claims of treason, and vicious innuendo directed against him.”

Trump also came to the defense of his former advisor, noting Flynn should ask for immunity due to a “witch hunt” by the media and Democratic party.

Mike Flynn should ask for immunity in that this is a witch hunt (excuse for big election loss), by media & Dems, of historic proportion!

Kelner declined to respond to TheDCNF’s questions regarding the immunity offer.

Requests for, and the granting of, immunity do not constitute an admission of guilt. It only means that the person “fears prosecution on the basis of their words, which, absent immunity, they would not utter, instead invoking their Fifth Amendment privilege against self-incrimination,” The Washington Post’s Fred Barbash noted Friday.

That said, Flynn himself claimed in September, 2016, that those who take immunity deals have probably committed a crime.

“When you are given immunity, that means you have probably committed a crime,” Flynn told NBC’s “Meet The Press,” regarding the granting of immunity to former Democratic Presidential nominee Hillary Clinton’s aides in exchange for information about her private email server.

It’s not clear whether authorities have discovered any potential illegalities regarding Flynn’s potential ties to Russia.

Several reports have alluded to potential ties between Trump campaign associates and Russia, including Trump’s advisor and son-in-law Jared Kushner and former campaign manager Paul Manafort. So far, federal investigations into any of Trump’s potential ties to Russia, which have reportedly been going since last Summer, have not led to any major indictments.

The New York Times reported in February that officials with knowledge of the investigation had, since then, “seen no evidence of such cooperation.”

US Manufacturing Jobs Still Heading South Of The Border