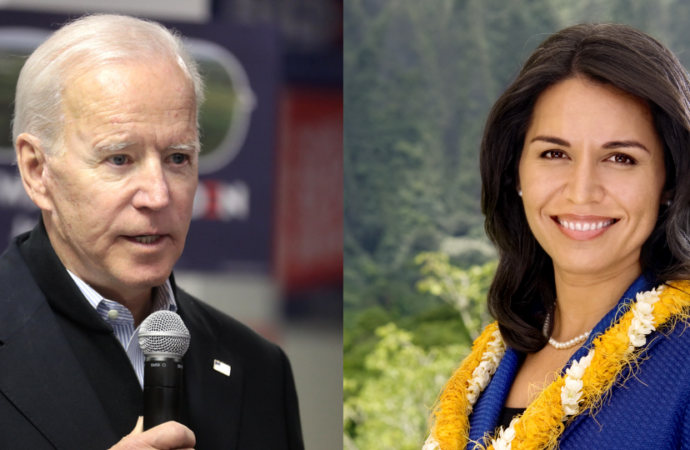 In case you missed it, Tulsi Gabbard dropped out last week and endorsed Joe Biden for president. The move was a surprise for two reasons. First, Gabbard had previously indicated an intent to stay in through the Democratic convention, but the complications of coronavirus made that proposition unrealistic. Second, Gabbard’s decision to not endorse her ally and friend Bernie Sanders was quite unexpected.

But Gabbard’s exit from the race opens her up as a potential candidate to be Biden’s running mate. The reality is that Biden couldn’t do any better than choosing her. It’s been a hot topic in recent days as a Biden nomination has become inevitable. We know that it will  be a woman, which narrows down the list considerably given how few women there are in politics.

Some of the popular suggestions have been Kamala Harris, Amy Klobuchar, and Stacey Abrams. None of those names really do much to broaden Biden’s base. Harris and Abrams, in theory, would help appeal to racial minorities while Klobuchar has the Midwest connection. Except Biden already does well among racial minorities – the main reason he’s trounced Sanders in states with diverse electorates – and his centrist platform already plays well in the Midwest.

Gabbard, however, would considerably expand the voter base for Biden. At a time when many Sanders supporters are getting ready to either sit 2020 out or look to third party options, Gabbard could be the olive branch that brings them back in. She’s close friends with Sanders and has championed many of the same policies.

Additionally, Gabbard was the first member of Congress to support and introduce a bill for an emergency universal basic income that President Trump and most of Congress has suddenly come around on. This would endear a Biden/Gabbard ticket towards the Yang Gang, many of whom were disappointed that Andrew Yang endorsed Biden. Gabbard’s early support for the measure would also help present Biden as the candidate who has a more swift and proactive approach to dealing with the coronavirus pandemic.

So adding a stalwart progressive like Gabbard to the ticket would do wonders for uniting a Democratic party which seems to be fracturing at the moment. But Gabbard offers more than that. Like Biden, she’s drawn considerable interest from independent voters and also has crossover appeal with Republicans. And her focus on a non-interventionist foreign policy has intrigued Libertarians so much that even hardcore anarchists and localists like Adam Kokesh have referred to her as “my favorite socialist.” That ability to draw votes from Republicans, Libertarians, and independents would be key to forming a winning coalition in November.

Finally, Gabbard is by far the youngest potential running mate, which solves arguably Biden’s biggest weakness: he’s old as dirt. That’s not ageism. It’s merely a matter of fact. Biden will be 78 at the time of inauguration, easily making him the oldest president at inauguration. And there’s already concerns over his mental state. At 38, Gabbard doesn’t have any of those concerns, and she’s repeatedly touted her physical fitness on her social media accounts. Given that a vice president really only matters in the event that the president vacates office for whatever reason, having a young, physically fit vice president to pair with potentially the oldest president ever is a good idea.

Biden can go in any direction he wants for his running mate. If he merely wants a friend who’s going to parrot his talking points – and, critically, say them in a coherent manner – then choosing someone like Klobuchar, Harris, or Abrams is the way to go. But if Biden is serious about winning in November, then he really has no other option than to choose the young progressive with crossover appeal. Either way, his decision will speak volumes about his campaign’s viability in the general election.

More:
The Party of Progress and Diversity Looks Like Old, Rich, White Men.