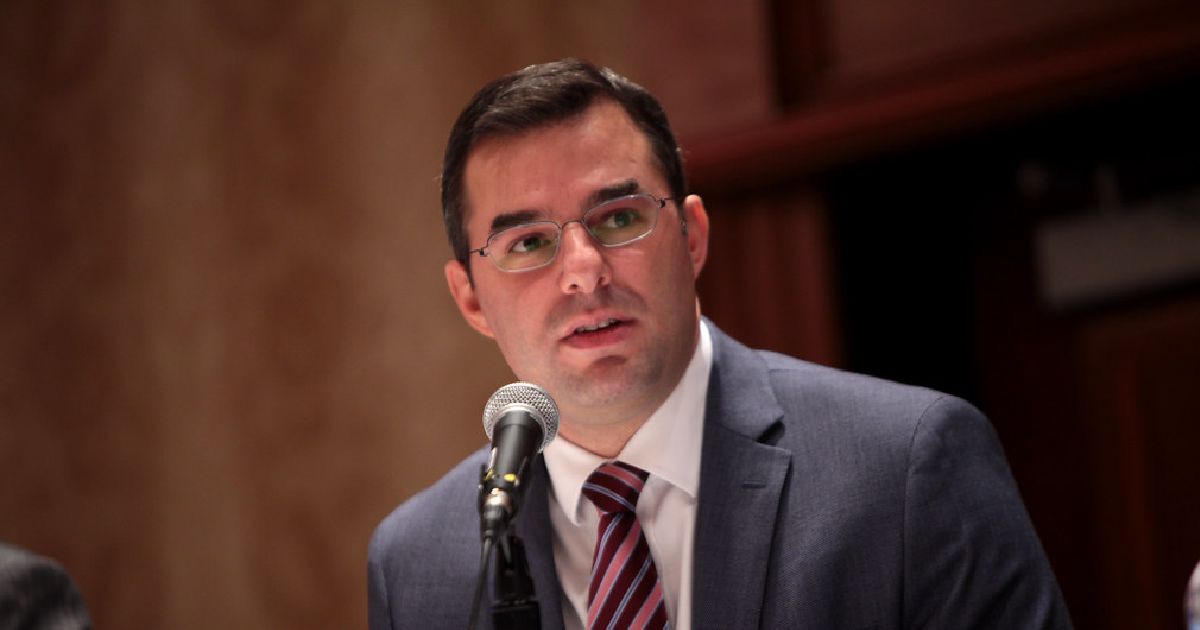 Like many libertarians, small ‘l’ and large ‘L’ alike, I have been watching the entrance of Congressman Justin Amash into the Libertarian Party Presidential contest with some interest. And, I’m going to have to disagree with the opinions of Bob DiCostanzo in his recent article published on The Libertarian Republic.

I’d like to assert that Tom Woods and Dave Smith are not only right on Congressman Amash, but also that they didn’t go far enough in their reasons for why he shouldn’t be the LP nominee. I believe that many people have good faith reasons for their beliefs, and I want to be as fair to Mr. DiCostanzo as possible, but his piece largely tries to argue nuance in favor of the larger point that Woods and Smith seemed to be articulating—which is the purpose of a Libertarian run for the Presidency.

Neither Woods nor Smith believe that Amash can win the Presidency in November, and that is the fundamental piece of the puzzle when analyzing their position. Smith makes a very clear point in the conversation that we need more people who believe in Liberty before we can actually get more liberty via government (if that’s even possible). You cannot just trick voters into putting a libertarian into the White House and expect to be able to govern effectively if the masses are anti-libertarian. If you believe that Amash can win, then that’s a different tack to take than to say that they are wrong and then avoid their most important contentions.

When Amash talks about the legislative process in Michigan and thinks you need “community-based rules” before you can open your businesses, he is ceding the territory of property rights and free association and getting nothing in return. Amash tweets about scaring legislators and the optics of the second amendment when optics being dictated by the opposition is historically how liberty gets sidelined.

Many libertarians believe that we are living through one of the greatest moments of libertarian potential in the modern era, so to go down swinging at process is both maddening and pointless. That he doesn’t throw verbal bombs isn’t the issue. It’s that he spends time walking on eggshells and qualifying his statements to not offend when liberty can be dangerous and offensive to some.

Yes, he criticized Michigan’s Governor in a Twitter thread and while talking to Reason’s Nick Gillespie questioned the need for lockdowns.

Regarding the near tyrannical lockdown extensions by his home state Governor he also tweeted:

.@GovWhitmer should not proceed without the support of the Michigan Legislature. A state of emergency can be abused and must be properly limited. The governor should respect the legislative process and the legitimate concerns of the representatives of the people. https://t.co/6DPJkfW3ax

The easy question here is, would Amash have a problem with the lockdown extensions had the representatives of the people deemed them appropriate? Democracy and liberty are not always, or even often, bedfellows and either can die with thunderous applause. We don’t know his position in this tweet because he chose to be squishy in his response.

Many of us see the point of a Libertarian Party Presidential run as largely to gain media attention and to get people interested in liberty a la Ron Paul. It is NOT to actually try and win the Presidency for a party that’s highest office WIN in memory is a county supervisor almost nobody can name in a city most people can’t find on a map. And I say that with all due respect to the incredible win that was for the party and candidate.

In the 49 years since the Libertarian Party was founded, it has never won a single one of the 435 House seats, 100 Senate Seats or a governorship in any of the 50 states. To think that is going to translate into a Presidential win coming off of a sub-4% vote in 2016 against Trump/Clinton is laughably absurd.

It is seen by some as a major achievement that Justin Amash holds the highest office ever held in America by a Libertarian Party member, but he got there by changing parties and not from the ballot box. If Amash truly believed in the LP and that it is a vehicle for effective change in an election, then one has to wonder why he left the GOP to become an Independent and only officially shed his Independent label AFTER he announced his run for the LP nomination? At this juncture, he will have spent more time labeled (I) than (L) in the Congressional record by the time he leaves office.

Did Amash believe that Michigan, which he would need to win the Presidency, wouldn’t vote for a Congressman in the LP?

That’s another point DiCostanzo ignores in his piece —Amash using the LP for a vanity project run to boost his image.

Justin Amash has never had use for the Libertarian Party much the way Bernie Sanders had no use for the DNC until he needed their ballot access. The compelling argument from the LP in 2016 was that Gary Johnson was better in every conceivable way than Trump or Clinton—and it’s hard to argue that point. You can cite Aleppo or whatever you want, but it’s a tough sell to say that Johnson would have been worse than the duopoly to anybody who holds liberty minded positions.

Yet, Justin Amash didn’t support Johnson in 2016. He supported Rand Paul, and then Ted Cruz, and then it was all crickets until November. Skip ahead four years and here we have Amash expecting people to jump ship from the duopoly he directly and then tacitly supported because he’s a good third choice, doesn’t have a sex scandal, and can bring people together. If that argument didn’t work on Amash in 2016, why does he think it will work on anyone else in 2020, if not for vain hubris?

The temperament issue matters in the context of the times and the goals of the party. DiCostanzo states that Woods/Smith are too harsh on Amash because he’s ignoring their articulated points for their harshness. They don’t disagree that he is very good on liberty and is a top tier Congressman. They’re saying that they don’t want him as the face of liberty because his moderate tone is not what is called for in a time of hyper-partisan rhetoric and ever-dwindling liberties in an era of fear and desired safety.

DiCostanzo says it’s unfair to criticize Amash on his position on something like the Paycheck Protection Program given his record, but even that’s a laughable premise. If you believe that the Federal Government is responsible for distributing money to people because the state governments locked them out of work—a redistributive plan that just adds debt—you are not arguing from a libertarian position. Saying something is MORE libertarian than X doesn’t make it libertarian in principle.

When Amash was asked on the We the Fifth podcast why he voted “Present” on the PPP vote as opposed to “No” on the Stimulus plan, he meandered around in his answer, talked about how bad the bill was, and then said that’s why he voted “Present”. For a candidate who is known for his ability to articulate his positions on every vote via social media, it seemed off and a bit too clever by half that he would dodge such a simple question.

On the issue of impeachment, not only is DiCostanzo wrong, but he again missed the entire point that Smith was making. Smith didn’t say that the CIA was trying to impeach the President—he said it was a Deep State coup. The point on process over the illegal and unconstitutional FISA warrants actually hurts Amash and not Smith in this context. DiCostanzo takes the intellectually lazy and binary position that to turn it around would mean that Woods/Smith are supporting Trump by being against Impeachment while admitting that neither is a Trump supporter. But this is just a distraction to dodge the point.

This is where ideology and consistency matter.

When the ACLU defended literal Neo-Nazis in the Skokie case, it obviously wasn’t because the ACLU had sympathy for Neo-Nazis. The ACLU chose to defend the First Amendment regardless of who it benefited. Considering Justin Amash spent years in Congress railing against the unconstitutional FISA courts, it makes no sense to then side with the very people who lied on warrants and abused that unconstitutional system in their efforts to go after Trump.

While it was stated that “Amash had his own reasons for impeachment, some of which could be described as libertarian”, none of those are given as a rebuttal to the point at hand.

Amash got caught up in the impeachment process and fell for a convoluted obstruction argument stemming from illegal and unconstitutional actions by the FBI, CIA and others. It is Amash, here, that is lacking consistency and libertarian bona fides, not Smith.

Finally, we don’t need to give Amash any grace. He has been a sitting member of Congress for 9 years. He didn’t just one day find out that the Libertarian Party was “The Party of Principle”. Woods, Smith and many of us in the liberty movement want a voice that will stand against tyranny so more people will hear the message.

The argument that a Congressman who worries about the legislative process and community-based regulations in a dystopian lockdown isn’t going to inspire anyone to join the fight for freedom.

People are suffering. People are struggling. People are scared, frightened, and mad. People have lost careers and businesses. The risks of suicide, domestic violence, and crime are going up all because the government locked people in their homes & unable to take care of their families. Officials are threatening people with physical removal from their homes and jail for defying the very decrees they themselves ignore.

This is not a time for process, nuance and subtlety for a middle way. This is a time for unapologetic liberty. If the Libertarian Party cannot see that, it has lost all purpose.

DiCostanzo says he is not a fan of the Libertarian Party, which is fair. But Amash’s race will not limit the size and scope of government if he is unwilling to forcefully articulate what his own constituents are screaming for in the streets about the theft of their liberties.

Joshua Ferguson is the host of The Hourly Struggle Youtube Channel, and a political activist currently being sued by his home city of Fullerton, Ca for allegedly clicking on public Dropbox links.

How to improve your focus when working from home?