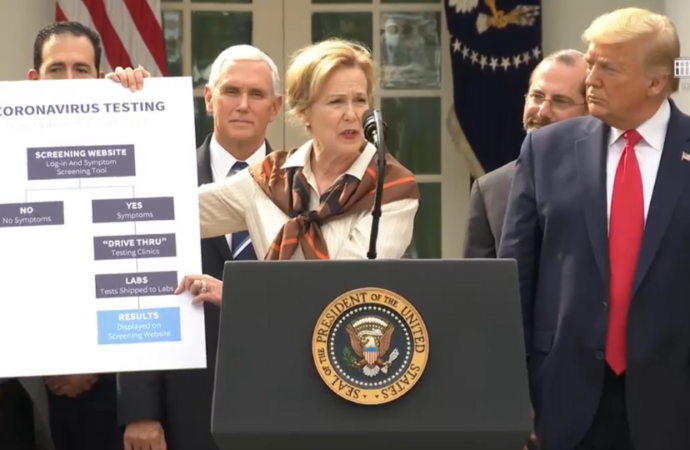 As the coronavirus continues to make its way across every continent (minus Antarctica), we have seen governments all over the world undertake preventative measures unheard of in modern history to control its spread.

Chinese authorities have locked down cities, constructed new hospitals, detained individuals suspected of being infected, and have even deployed robotic disinfectant sprayers throughout some of its regions. In South Korea, government officials have established “drive-through” testing stations where individuals can go for a screening – meanwhile, their soldiers are busy spraying disinfectants inside isolated apartment complexes and airports.

Italy, in an unprecedented measure, has locked down the entire country. It’s hospitals and public health services have since been overwhelmed with patients seeking treatment for the virus, leaving some citizens trapped in their houses with the bodies of loved ones, unable to find funeral homes for them. Anyone who attempts to escape the lockdown may potentially face three months in prison or a fine of around 200 euros. Italy currently holds the second highest number of COVID-19 related fatalities, standing at over 1,266 deaths, behind China, which is over 3,180. They are followed by Iran (514 deaths), Spain (133 deaths), and France (79 deaths), according to the most recent data from the John Hopkins University COVID-19 tracker. These numbers will continue to increase over the coming weeks.

Since then, COVID-19 has officially been declared a global pandemic by the World Health Organization. As thousands rush to grocery stores to grab whatever goods will last them the next couple of weeks and the stock market continues its Great Recession style plunge, the American people are running into the problem of whether or not they can trust their government to effectively handle a crisis of this nature. But most importantly, whether or not they can trust their president to lead the nation out of its current distress and reassure them of their safety and of the integrity of the marketplace.

One of the problems of having a populist president in the White House is that inherent to populism is a distrust of sources of authority and elite institutions. What represents a distrusted source of authority better than the U.S. government and our public health institutions?

The very logic built into the Trump presidency is that the government is ineffective, corrupt, and incapable of most anything. In the extended rendition of this logic, most, if not all, American institutions are not trustworthy and thus deserve no pretense of embodying traits such as reliability or honesty. Even the D.C. swamp has yet to be drained, according to the nature of Trump’s own tweeting this past month. In fact, it is not clear that it will ever be drained – not so long as it remains a politically useful slogan. The same goes for “deep state” narratives, of which Trump says that “We have a long way to go. There are still some very bad, sick people in our government.” To date, the Trump administration has done very little to abate the American people’s lack of confidence in their institutions.

The fact that Trump is now having to indirectly ask – or rather is indirectly telling – the American people to trust the government and their actions in combatting the coronavirus is counter-intuitive to the rhetoric that the public has been steeped in for the last 5 years. Such populist rhetoric goes both ways for men like Donald Trump and Bernie Sanders. For what reason do Sanders and his adherents believe that anyone should trust the government when it is being headed by Donald Trump and not themselves?

This only leaves those who already like Trump or are twitter-pated with his cult of personality to have trust in him and what his administration is doing, while those who detest him warrant none. Others, who are more skeptical of the government’s capacity to act, are left with either their cynicism or a sense of faith in determining whether or not they can trust the president to appropriately tackle COVID-19. Such beliefs seem to be reflected in the 51% disapproval rating for Trump’s handling of the coronavirus outbreak according to a recent Public Policy Polling survey.

But the cognitive dissonance of a populist president wanting public trust in the government may be why, instead of constantly promoting the government’s counter-measures against the coronavirus, Trump and his associates have taken to attacking the media’s coverage of the disease. As the media is another elite institution with low levels of public confidence, it is an easier and more comfortable target to blame for coronavirus related panic. While the media may at times overhype the extent of the disease and cover it in such a way so as to deliberately make Trump culpable for its spread, attacking it doesn’t exactly suffice for creating more public trust in the government’s efforts and easing national tensions. It merely distracts from what the president ought to be doing given his position.

Yet, even when Donald Trump does do what he ought to be doing – which is to reassure the American people and thoroughly explain what actions the government plans on taking – his personal shortcomings still prevent him from competently achieving that.

On March 11, when Trump gave his speech on the coronavirus from the Oval Office, what was intended to calm the concerns of the American people ended up being described as one of the worst speeches of his entire presidency. From failing to read crucial words in the speech to causing a panic among American citizens abroad in Europe to a complete lack of communication with European partners, another public relations nightmare took place in the White House, with aides scrambling to clarify, correct, and walk back key statements made in the speech. While the White House remained in a state of chaos, other administration officials and top Republicans were out in public insisting that Donald Trump was doing a better job than any president before him.

A second public announcement had to be convened on March 13th in the Rose Garden to correct for the disaster of Wednesday night. This time, Trump declared the coronavirus a national emergency, which would release an additional $50 Billion in federal aid to combat the pandemic. But given the administration’s previous stumbles, such a display is unlikely to significantly boost public trust.

Perhaps this shows the limitations of having a populist president with the character of Donald Trump. At a time when the American people and domestic markets want to be reassured of their safety, they can only find it if they themselves are in line with the political persuasion of the president. Others will have to make do with their COVID-19 induced anxiety, take proper health and safety measures, and hope for the best.