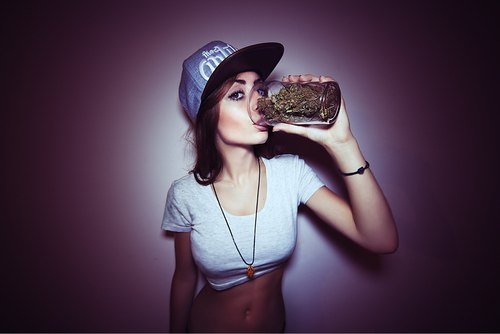 President Barack Obama told Vice News in an interview released Monday that America’s youth should stop obsessing about the legalization of marijuana.

Instead, they should be thinking about climate change, and other issues.

Obama’s interview with Vice News’ Shane Smith covered political gridlock, global warming and foreign policy. But aside from pressing issues like framing a coherent and unified response to Iran’s nuclear program, according to Smith, “Our number one question from everyone on the Internet was, and it might seem flippant… states are legalizing marijuana. It seems like an inevitability.”

However, Obama did confirm that if more states legalize or decriminalize marijuana, Congress may be motivated to reschedule marijuana, adding that libertarians in the Republican Party are starting to see that from a fiscal perspective, full-scale marijuana prohibition just doesn’t make sense.

“You’re starting to see not just liberal Democrats, but also some very conservative Republicans, recognize this doesn’t make sense, including the libertarian wing of the Republican Party,” Obama stated. “So we may be able to make some progress on the decriminalization side.”

In a recent YouTube interview, Obama predicted that more states are likely to look at legalizing marijuana, and if states make the decision to take marijuana policy into their own hands, the Department of Justice won’t stand in the way. (RELATED: Obama Makes A Big Prediction: More States Will Join Colorado And Legalize Marijuana)

“The president is right that as voters force more and more changes to state marijuana laws, national policymakers will have no choice but to catch up,” Tom Angell, chairman of the Marijuana Majority, told The Daily Caller News Foundation. “But he should think again about how important this issue is. On average, there’s a marijuana possession arrest in the U.S. about every minute. Billions of dollars are wasted on enforcing prohibition laws that don’t stop anyone from using marijuana but do ruin people’s lives with damaging criminal records. In fact, his administration can reschedule marijuana without any further Congressional action needed. He should do that.”

But Obama cautioned that legalization of marijuana isn’t a panacea and won’t fix the country’s problems with substance abuse, either of legal or illegal drugs. According to Obama, to overstate the positive effects of legalization is to imply that legalizing or decriminalizing drugs like meth, cocaine, crack and heroin is a good idea.

“Marijuana should not be compared to meth, heroin, crack, or any other similar drug seeing as these substances are killing people and ruining lives in record numbers,” Anthony Franciosi, founder of Ant’s Organic, told TheDCNF. “Marijuana is an uplifting force in our country through jobs, tax revenue, and compassionate care. To call legalization a “panacea” brings about the question: ‘What is the problem with the current policy?’ I think the problem is not allowing access to marijuana to sick people whose quality of life can be greatly impacted by this very powerful natural medicine. So in some sense legalization is a solution.”

Others in the Obama administration have recognized the medicinal value of marijuana. In early February, U.S. Surgeon General Vivek Murthy said that marijuana is, in fact, effective for certain medical conditions and that the preliminary information means we should start rethinking federal policy. (RELATED: US Surgeon General Confirms That Medical Marijuana Works)

Starbucks Wants To Talk To You About Race