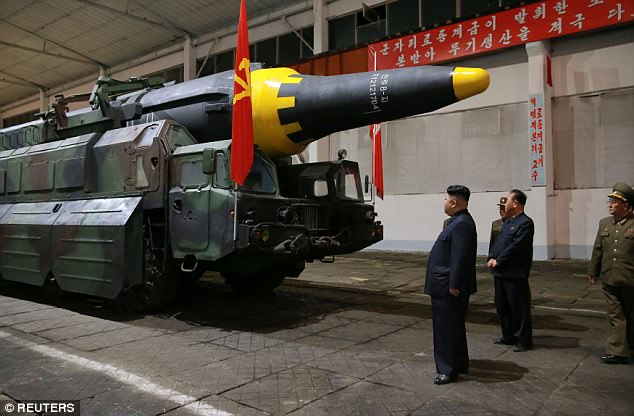 North Korea’s latest ballistic missile test offered valuable insight into its weapons program, hinting that the North is moving rapidly toward something bigger.

A Hwasong-12, a new medium long-range surface-to-surface missile, was launched from Kusong early Sunday morning. The missile flew roughly 430 miles, but the weapon was intentionally lofted. Analysts suspect the missile could potentially hit targets 2,800 miles away if fired along a standard trajectory.

The North “appears to have not only demonstrated an intermediate-range ballistic missile (IRBM) that might enable them to reliably strike the U.S. base at Guam, but more importantly, may represent a substantial advance to developing an intercontinental ballistic missile (ICBM),” John Schilling, a respected aerospace engineer who specializes in rockets, explained.

With the ability to strike Guam, the North may now have the means to strike most major U.S. strategic assets in East Asia and the western Pacific. While this would be an impressive achievement, North Korea is determined to master ICBM technology. The missile tested Sunday may be the predecessor to a future ICBM.

The new ballistic missile appears to be the “mystery missile” North Korea rolled out during a military parade last month. Observers suspected that the missile in the parade was an ICBM variant, but it looks like the weapon in the parade was the Hwasong-12, a single-stage, liquid-fueled rocket.

Yep, the North Korean missile tested (left) was the missile from the parade (right). Told you so. pic.twitter.com/tPyk9RpGi0

With a range somewhere between the unreliable Musudan IRBM tested eight times last year with only one success and the yet-to-be-tested ICBM, the Hwasong-12 may be the longest range missile North Korea has tested to date.

“This was a single-stage liquid rocket but it was still using high-energy fuel, so it probably had a really great range,” Melissa Hanham, an expert at the James Martin Center for Nonproliferation in California, told The Washington Post, adding, “This is the longest range intermediate range ballistic missile they have shown us, and it could be part of an ICBM.”

Ankit Panda, a senior editor at The Diplomat, suspects that the missile may be a “shorter, single-stage version of the KN-08,” an untested North Korean ICBM presented a few years ago.

Images from the launch also indicate that the missile may have been equipped with the same high-thrust engine North Korea tested back in March.

Possible the Hwasong-12 uses new engine DPRK displayed in March. You know, the one whose significance "the whole world will soon witness"… pic.twitter.com/6ScQ7HylLi

The North also experimented with a heavier warhead and may have also tested a re-entry vehicle, according to North Korean media reports.

“North Korea’s latest successful missile test represents a level of performance never before seen from a North Korean missile,” Schilling explained to the Post, adding that Pyongyang may be only one year away from developing an effective ICBM rather than the expected five.

“Given speculation over the past months about the possibility of military action by the Trump administration to prevent Pyongyang from acquiring such a weapons, the possible testing of ICBM subsystems in this low-key manner may be a North Korean hedge against the possibility of such action,” he wrote in an article for 38 North, an independent research site.

Kim Jong-un has encouraged the development of ballistic missile technology at an accelerated pace. North Korea has fired off more missiles in the past three years than in the three previous decades combined, reports the Wall Street Journal. The North has tested at least two, possibly three, new ballistic missiles this year.

The Ransomware Outbreak Has Been Great For One Industry In Particular

Snowden and Chomsky to Trump: Prosecution of Wikileaks is “A Threat to All Free Journalism”