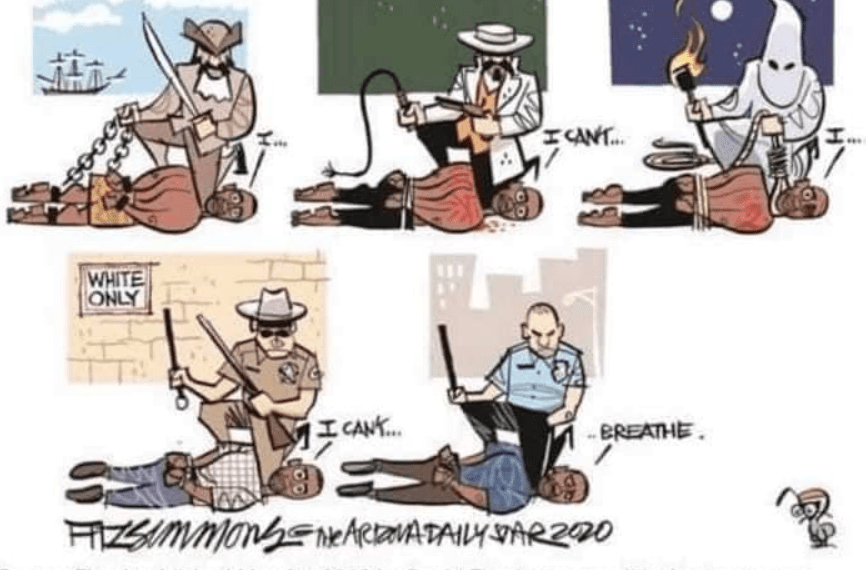 The assignment was part of a chapter on “European Colonization of America,” given by Westlake High School teacher Christopher Moreno to 11th graders on Sept. 8, the Post reported.

The image depicted five versions of the same illustration that depicted one man kneeling on another’s neck, according to a picture of the assignment obtained by the Post. Types of men shown kneeling included a slaver, a KKK member, and a police officer.

Captions under the pictures said “white only” and “I can’t breathe,” according to the picture. The assignment asked students to “describe the goals of the Black Lives Matter movement,” and whether or not they agreed with the movement.

“My daughter showed me the paper. I said, `What is this?! You’ve got to be kidding me!’” Ania Paternostro, the mother of a student at Westlake said, the Post reported.  “This cartoon compares the police to the KKK. It’s an attack on the police.”

“Enough is enough,” she said, the Post reported. “This cartoon is disturbing. We have to respect the men in blue who protect us,” Paternostro added. “We don’t need a teacher brainwashing my kids. I’ll teach my kids about what’s right and what’s wrong.”

Paternostro’s daughter Nicole expressed concerns about the assignment, saying she thought it was one-sided and anti-police, the Post reported. Nicole said she has been bullied and called racist on social media since expressing her opinion on the assignment.

“The cartoon was disgusting,’’ Nicole said, the Post reported. “It compared the police with all the terrible people in history. It was not fair. It wasn’t right.’’

Kotes sent a letter to the parents of students in Moreno’s class which promised an “investigation” into the assignment, the Post reported.

“I want to address an issue that I have recently been advised is of deep concern to many members of our community,’’ Kotes said, the Post reported. “Specifically, I have been advised that one of our High School teachers may have recently conducted a lesson that many have deemed to be highly controversial in the current climate.”

Kotes added that he would update the community once the investigation concludes, the Post reported.

Steve Kardain, a retired Mt. Pleasant police officer and former New York City Department of Investigations prober called the assignment a “smack in the face to law enforcement,” the Post reported. “It’s an absolutely a smear of the police,” Kardian said.

“Our schools should be a place for the open exchange of ideas, not political indoctrination,” Astorino said, the Post reported. “The false narratives and brainwashing has to stop.”