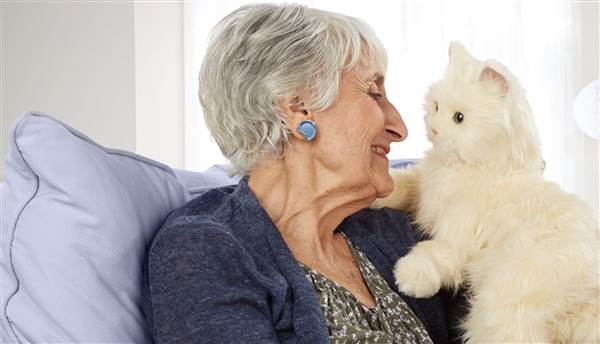 A new robotic “companion pet” developed by Hasbro aims to combat loneliness among the elderly. According to research, the company’s new initiative, “Joy For All,” which focuses on more than just playing with toys, may be helpful to those suffering from dementia or Alzheimer’s too.

As reported by BBC:

“The robocat is designed to mimic a real animal. It miaows, semi-convincingly, and it purrs, very convincingly. It’s fluffy and nice to stroke, although the rigidness of Alan’s electronic innards spoils any illusion that he is real.

But even with those flaws, it works. When you switch it on, you instinctively say “hello!” – and from that point onwards, it’s no longer a gadget. It’s a cat…

It may seem slightly bonkers that anyone could have a real, human connection to what is essentially just a noisy bundle of electronics. But that’s missing the point.

Alan, and other robotic companions, are only daft to people who don’t have a need for them. For those who do, it’s a distraction, a friendly face, something that makes you – even if just momentarily – feel better.”