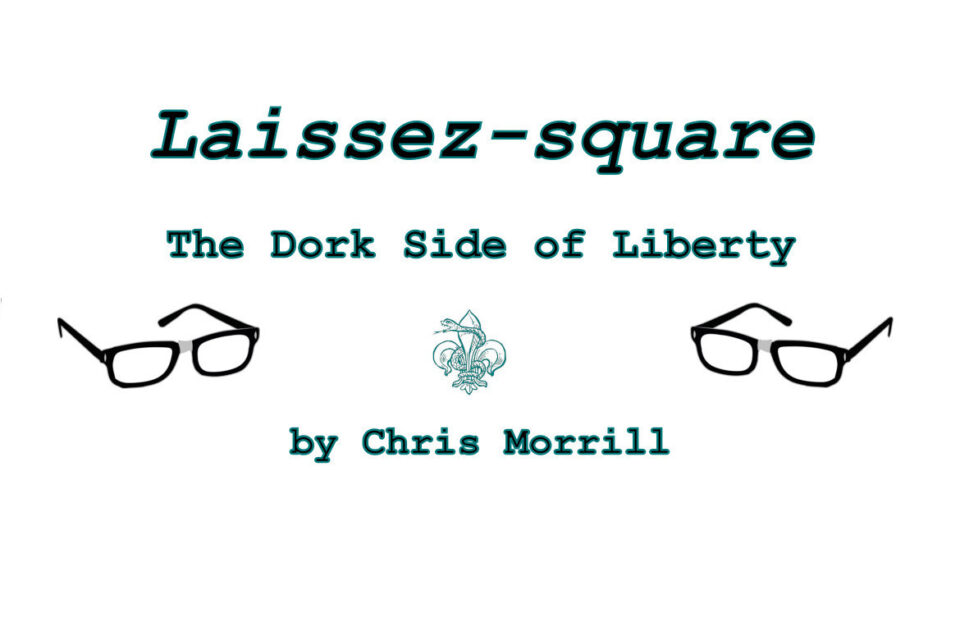 My Long, Strange Trip to Liberty

or, How I Learned to Stop Worrying and Love the Laissez-faire

My evolution into a libertarian took place in three phases:

I grew up in southeast Missouri, a place so uniformly conservative that anyone to the left of our native son Rush Limbaugh is looked upon with instant suspicion. In my formative years, “conservatives” could be Democrat or Republican. Southern Democrats weren’t extinct yet; in fact, they ran pretty much all of southeast Missouri south of Cape Girardeau up until the 2000’s.

In the 1970’s and 1980’s down here, you got to choose between conservative Democrats and conservative Republicans. Which is really not much of a choice. (It makes me think of the scene in The Blues Brothers at Bob’s Country Bunker regarding the question of music: “Oh, we got both kinds. We got country and western.”)

My home county (Scott) was a weird place. Everyone claimed to be a Democrat because that’s how everyone around there had voted since the Civil War. Everyone loved labor unions. Yet, notorious union-buster Ronald Reagan won about 54% of the county vote in 1980 and 61% in 1984. I should’ve known something was going on with those local Democrats when many of them seemed more interested in Lynyrd Skynyrd and Lyndon LaRouche than liberalism. It took a while, but they are all Trumplodytes now.

I picked up on the local dissonance early on. I often wondered, “Why are these people obviously Republican, but still clinging to the Democratic Party?” I decided to cut out the middle man and just be openly Republican. For a while, I even wore neckties to school when I didn’t have to. (I can’t say this fashion choice was a big hit with the junior high ladies.) The television show “Family Ties” introduced Alex P. Keaton as a parody of young conservatives; I embraced the parody. (Think of Alex P. Keaton as a harbinger of Ron Swanson from “Parks & Recreation”; a parody that was accidentally endearing.)

As I got a bit older, the Democrats slowly morphed into Republicans. We had very few liberals and even fewer libertarians. In fact, libertarians (as a philosophy or as a political party) were hardly discussed in my high school’s government/civics classes. Even in college, we learned little about them. My philosophy professor spent all of about five minutes on Ayn Rand, which he spent expressing his utter contempt for her. Not because she was stridently atheist (as most of the college faculty probably is), but because, in his view, she was stridently greedy. Somehow that was worse.

I was a member of the College Republicans at Southeast Missouri State University (“SEMO”) but my heart wasn’t really in it. I served on the Student Senate and was remembered mostly for:

(We’ve always had some commies at SEMO, but they are mostly harmless. They just write angry letters to the local paper and protest random things at “Freedom Corner” when there is a Republican president.)

I’ve always had a fascination with things that are different or things that don’t quite fit in. I was always the kind of young fellow who fell in with the misfits, the nerds, and the outcasts. Given that, it’s probably no surprise that I became interested in libertarianism. It’s a logical place to find yourself if you value individuality, and it certainly doesn’t fit in with some mainstream political ideologies.

As a young ‘un, when I was curious about the other flavors out there than Democrat vs. Republican, or liberal vs. conservative, I had to learn more about those flavors myself. I knew there was a Libertarian Party, sure. The names Ron Paul, Andre Marrou, and Harry Browne were vaguely familiar to me, even if I didn’t really understand the nuts and bolts of the party platform. (And boy, are there some nuts.)

One thing I did understand as a young adult, however, was that I enjoyed smoking, drinking, cursing, carousing, and chasing skirts. I also never cared much for the fundamentalist Christian crowd, who seemed to dedicate their lives to killing buzzes. None of these personality traits of mine seemed to jive very well with “conservatism” as I understood it. They seemed to jive pretty well with libertarianism, however (or more specifically, libertinism). Imagine my delight when I discovered that there were others like me. People who hated the government but who also weren’t against a little bacchanalia now and then. Right on.

My first serious trip down the rabbit hole of freedom was reading P.J. O’Rourke’s Republican Party Reptile. In this work, he described his general outlook as follows:

“We are in favor of: guns, drugs, fast cars, free love (if our wives don’t find out), a sound dollar, and a strong military with spiffy uniforms. There are thousands of people in America who feel this way, especially after three or four drinks. If all of us would unite and work together, we could give this country…well, a real bad hangover.”

This same book had a chapter named (I kid you not): “How to Drive Fast on Drugs While Getting Your Wing-Wang Squeezed and Not Spill Your Drink.” “Sign me up!” thought an enthusiastic young Chris. (In the interest of full disclosure, I have never actually driven fast on drugs while getting my wing-wang squeezed and not spilling my drink. I mean, as far as you know.)

It was not lost on me that Mr. O’Rourke was still a Republican despite also being a libertarian. The whole “small l” vs. “big L” libertarian thing is a whole other topic of conversation for another day. But suffice to say, when I learned more about the philosophy, I learned more about the party as well. I already knew that I possessed an innate desire to misbehave. But I never understood why both major parties were inconsistent on their treatment of social issues versus economic issues.

In short: allow me to misbehave, but I don’t expect you to pay for my misbehavior. I’ll do the same for you. That seems more than fair.

I finally made the transition from “small l” to “big L” in 2000, after my homeboy John McCain got bounced from the GOP primaries in favor of a milquetoast lightweight who happened to have a very famous last name. (I know, I know, McCain was never very libertarian about anything; I mostly admired his mean streak, his biting wit, and his penchant for poking evangelicals in the eye.) It took me a while to come to terms with some of the party’s more controversial planks (such as drug legalization), but once you’re in for a penny, you’re in for a pound. I’ve been a dues paying Libertarian Party member more or less ever since. That doesn’t mean I am unaware of the party’s many faults, or that I always vote for its candidates. (That also is another conversation for another day.) At the end of the day, it’s hard for me to not support a party that I happen to agree with on almost every issue, even when I know in my heart of hearts that they’re kind of hopelessly screwed.

In the twenty years between the twilight of my McCainiac days and here, I’ve written lots of stuff, much of it political and liberty- oriented. I’ve even ran for office twice as the Libertarian sacrificial lamb (Missouri state senate in 2004, Missouri Secretary of State 2016.) I fell in with the Austin Petersen camp in the 2016 Libertarian Party presidential nomination fracas. I stuck with him in 2018 when he pursued the Republican nomination for U.S. Senate from Missouri. (The joke at the time was that I donated more money to his Senate campaign than I spent on my own campaign two years earlier. I wasn’t joking, though.)

When Petersen began his morning radio show in Jefferson City on KWOS in 2019, I was one of the very first listeners in the wretched hive of scum and villainy known as the show’s Facebook livestream. Sometimes I call in and inflict my deviant opinions upon his broader listening audience. We decided that maybe we could put some of this particular brand of mental unwellness into print form as well.

I aim to bring liberty-oriented content with a humorous twist to The Libertarian Republic on a weekly basis. There may be some Missouri-specific pieces from time to time as well, as I’ve lived all but five years of my sorry life in this fetid mashup of the upper South and lower Midwest. (Hey, somebody has to live here.)

I reckon I’ll be seeing you around. In the meantime, don’t go spilling that drink.

Choosing a College That Trains You for a Specific Career

How Much House Can I Actually Afford?