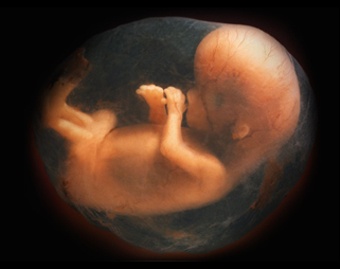 Krysta Davis was four months pregnant when she received the heartbreaking news that her baby would be born with a rare disorder, and was expected to live only minutes after birth.

She was diagnosed with anencephaly, a deadly disorder that interferes with brain development.

Davis and her boyfriend, Dereck Lovett, were given two options by doctors: they could induce labor, or they could have the baby and donate her organs The couple made the decision to share the gift of life.

“We decided that even if we couldn’t bring our daughter home, no mother would have to go through what we were going to go through,” Davis, of Cleveland, Tennessee, told People magazine.

Their daughter, Rylei, was expected to only live for thirty minutes after she was born – instead, she survived for a whole week.

“There’s no way to describe how amazing it felt. When you go to thinking you’ll only have 30 minutes with your child and you get an entire week,” Davis said to WTVC-TV.

Dr. Gonzales told WTVC-TV that the hospital only sees babies with the rare condition once a year, and that none survive the disease.

“She came out star-gazing,” Davis told People magazine. “She was born face-up. It was the most overwhelming feeling of love that I’ve ever felt in my life. Laying eyes on her, I never knew that I could love someone so much. It was insane.”

“We were able to fit an entire lifetime of love into that one week with her that wasn’t promised to begin with,” Davis told the publication. “She just smiled the whole time. She was such a good baby.”

Rylei was born on Christmas Eve and took her last breath as of New Year’s Eve. After Rylei died, her heart valves and lungs were donated to two children at a research hospital.

Davis has struggled with losing her daughter, but finds comfort in knowing she helped other children to live, People magazine reported.

“There are going to be two kids who make it a lot longer because of her,” Davis said.

The couple said they are thankful for the short time they had with Rylei.

“It’s been really hard coming to terms with the fact that she’s really gone. But it’s also been a great month that we’ve got to share her story,” Davis told People magazine.”

“It’s helped a lot to be able to help other women in our situation, and hear their stories. It warms our hearts to know that [Rylei’s life] will give two other babies a second chance at life.”