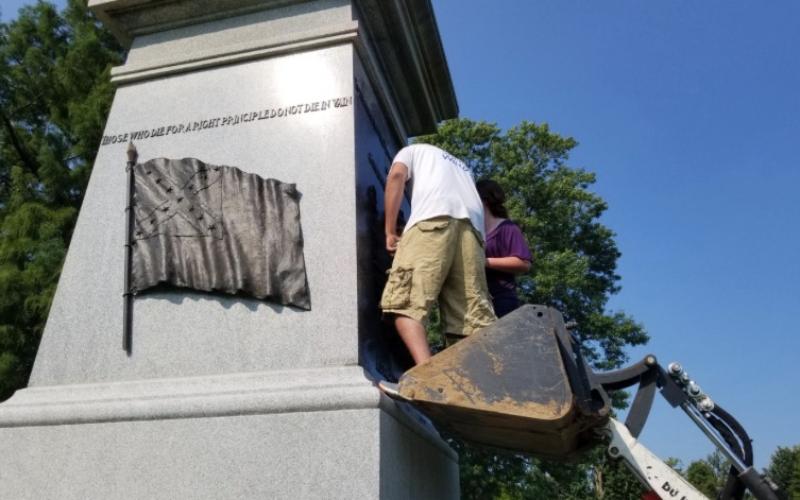 A Missouri lawmaker says in a Facebook post that he hopes whoever placed paint on a Confederate monument in Springfield is found and hanged.

Osceola Republican Rep. Warren Love said in a Facebook post Wednesday that he hopes whoever vandalized the monument is “hung from a tall tree with a long rope.”

Republican Rep. Shamed Dogan provided KSDK with a screengrab of the post, which can be seen here.

He later told The Associated Press that he didn’t really mean that and says he thinks it’s terrible when someone vandalizes an object of remembrance. Love apologized in a later post he provided to AP.

Springfield News-Leader had an update from Rep. Love this morning:

He added that his initial statement — “I hope they are found & hung from a tall tree with a long rope” —  was not meant literally.

“I do not believe that,” he said. “That was a stupid statement.”

He added he hoped his remark would not be “blown out of proportion.”

“There’ll be people who want to get me out of the legislature for some stupid-ass remark I made,” he acknowledged, adding he had no plans to resign.

Love provided additional statements he said he made to his Facebook page, saying “anyone regardless of Age, Gender, or Race that would desecrate or vandalize an Object of Remembrance in a Cemetery is a low life that has no respect for Memorials that have been placed by loved ones or people that want to honor an individual” and adding he thought this kind of vandalism should be a felony offense.”

“It appears that several people have interpreted a post I made about a penalty for Vandalizing an Object of Remembrance in a National Veterans Cemetery to be rather harsh and inciting violence,” Love said in a separate statement. “I did not mean it that way and was only using (an) old Cowboy Statement that is a western custom of a penalty for thieves that steal Cattle & Horses.

“To all who this post offended I am very sorry. However I do believe it is very serious when a Cemetery or Object of remembrance is desecrated or vandalized and the penalty needs to be increased from a misdemeanor to a felony.”

Ex-SWAT Protects Houston Shopping Center: I Will Cut Yo’ A** in Half! [VIDEO]