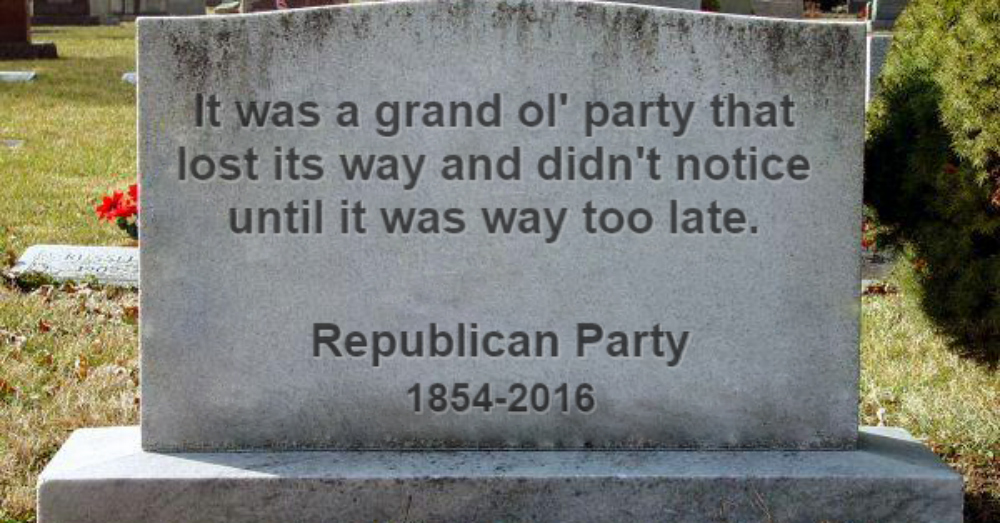 My friends, I have some very saddening news. I’m going to be going to a funeral of a dear friend of mine. He hasn’t passed away yet, but doctors say he only has about eleven weeks left to live. You might even know who is is.

And old did he become. For the past 162 years, the GOP has stood firm on the values of small government, freedom and prosperity for all. Sure, there have been some times when the GOP lost its way, but it always seemed to find itself not too far after. But 2015 and 2016 were years of insufferable damage to both itself and to its outwards appearance.

Now, in any other election cycle, seeing a name like Trump as a potential candidate would be laughed off as a means for Trump to get some free media to help his brand. But there was something different about this election cycle. It was something that no political strategist or political scientist could ever try and change. It was anger. An anger that the average American wasn’t being listened to. That regardless of what they did, the political elites would end up doing what they wanted.  So what was the solution that these voters decided upon?

Blow the whole thing up.

And looking at the potential candidates for the GOP to have carry its banner forward in the general election, candidates like Rand Paul, Ted Cruz, and Ben Carson were all candidates who were against the establishment and were prepared to march forward as the Republican Party nominee. They were prepared to carry their anti-establishment message forward as Republicans who espoused conservative and libertarian ideals (okay, libertarian belonged to Paul). But then, Trump happened.

Trump, in typical populist fashion, echoed back the anger and vitriol that the base was screaming:

“We will build a great wall!”

“We are going to Make America Great Again!”

The quotes are endless, but I digress.  Normally, this kind of pandering and rhetoric would only get a candidate so far, but Trump, through his bombastic rhetoric and star-power, was able to continue driving his campaign forward, all the while systematically destroying all those who stood in his way. Along the way, Trump made countless controversial comments about his fellow candidates, their respective families and loved ones, media personalities, etc., and the base that was his core group of supporters ate every single bite of it up.

And suddenly, there was nobody to stand in Trump’s way from securing the GOP nomination. The last glimmer of hope for those standing against Trump was crushed when Trump defeated Cruz and John Kasich in Indiana.

Suddenly, Trump was the face of the GOP.

And this, my friends, is why our friend, Mr. Grand Old Party, will soon be approaching the pearly gates. Not only is Trump on pace for one of the greatest general election defeats in history, but he is also destroying the Republican brand along the way. Trump has attached his name to the GOP, conservatism, and yes, even some libertarianism, and is now serving as the face to outsiders as to what it means to be a part of those labels and a part of the GOP.

Voters outside of the GOP look at Trump and his bombastic rhetoric and ask, “is THAT what it means to be a Republican?” And several of those in the GOP scream out a resounding “NO!” But alas, it makes no difference. Trump not only has the ability to use his star-power to silence those dissenting voices, but he also has that core of supporters who enabled him since the beginning, who will defend anything he says or does, regardless of the impact his sensationalism has on the Party.

As a libertarian within the Republican Party, a party that several libertarians have been using as a vessel to promote libertarian ideals (see: Justin Amash, Rand Paul, Thomas Massie), watching Trump destroy the GOP does sting. It cannot be understated as to the ability for the GOP to serve as a mouthpiece to libertarian ideals. Having a man like Rand Paul on the GOP presidential debate stage, who was promoting libertarian philosophy and principles, was and is a very big deal.

But again, I fear that the days of the GOP are numbered due to the impact of one Mr. Donald Trump. If the GOP does survive, it will be a shell of its former self for years to come. From 2016 and onward, those Republicans disaffected by Trump and what he did to the GOP will be searching for new homes to set up shop.

This is where it is time for those libertarians who want to see the Libertarian Party and its messaging successful on a larger stage must embrace those seeking refuge. We may not agree with their views in their entirety, but that’s okay. To grow, we must be inclusive. To be inclusive, we must acknowledge that we aren’t always going to agree. But being inclusive allows us to grow and to spread our message of economic prosperity and personal freedom. Even if we find faults in some of the Republican refugees’ positions, we must always remember: “The person who agrees with you 80 percent of the time is a friend and an ally — not a 20 percent traitor.”

So, once the GOP is officially laid to rest, it will be time to spread our arms wide open and embrace those who mourn. 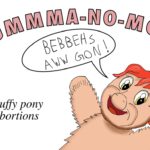 After Botched Abortion, Woman Sues For Money To Raise The Child 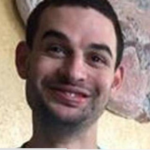 Police Shoot Deaf Man Dead After He Does Not Hear Sirens