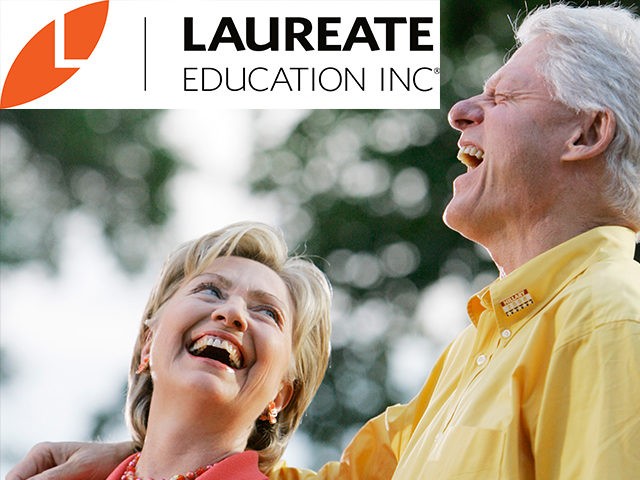 Laureate Education, Inc., which has close ties to Bill and Hillary Clinton, tanked on its first day in the stock market.

The for-profit firm’s Initial Public Offering (IPO) of stock to potential investors was put on the market on Wednesday by KKR and other leveraged buyout owners in the hope of reducing a crushing $4 billion debt.

But even before the company was to go public as a NASDAQ traded firm, it was clear the stock price would not command the owner’s projected $17 to $20 price target. Late Tuesday before Wednesday’s opening, the market priced the Laureate IPO at $14, about 15% below Laureate’s estimates.

The Laureate IPO went nowhere during the day, closing at $12.46.

“There was no appetite for this stock. It looked ugly today,” Lon Juricic told The Daily Caller News Foundation Investigative Group (TheDCNF). Juricic is founder and president of StreetInsider.

“There’s just a lot of questions about the company.  The private owners, they’re liquidating it.  Investors don’t like it’s big debt.  They weren’t biting,” Juricic said.

Laureate operates 71 educational institutions in 25 countries with a heavy presence in Latin America.

The Clintons were not far from the minds of Wall Street observers, either.

Laureate’s relationship with the Clintons began in 2010, when it paid the former president $16.5 million as its “honorary chancellor” for five years. Baltimore-based Laureate — led by chairman and CEO Douglas Becker — also donated up to an additional $5 million to the Clinton Foundation.

And during former Secretary of State Hillary Clinton’s tenure, the Department of State’s U.S. Agency for International Development awarded $55 million to the International Youth Foundation (IYF), which is linked to Laureate and is chaired by Becker.

The issue of Laureate’s Clinton ties came to a head in a July 15, 2016, letter to IRS Commissioner John Koskinen by 64 Republican members of the U.S. House of Representatives, saying such relationships create “an appearance that millions of dollars in taxpayer money was channeled to IYF by Secretary Clinton’s State Department as a kickback for her husband’s generous contract as an honorary Laureate chancellor.”

Koskinen informed the congressmen on July 22, 2016, that he referred the matter to the federal tax agency’s Exempt Operations Program, which regulates charities.

While Laureate did disclose the $16.5 million payment to Bill Clinton in its S-1 filing with the Securities and Exchange Commission (SEC), TheDCNF reported Tuesday that company officials said nothing about either the IRS referral or congressional concerns. The SEC requires firms planning IPOs to disclose all potential “risk factors” to investors.

Donald Dion, attorney-owner and chief investment officer of DRD Investments, told TheDCNF the IRS review omission was a “big problem” and described the IPO’s performance Wednesday as “a complete disaster.”

Dion said “we look at every risk problem. You list everything. When you don’t list materially significant problems, you invite the plaintiff’s bar to get involved,” suggesting class-action lawsuits could follow failure to disclose such risks.

Laureate IPO promoters met little enthusiasm before the offering went public, Dion said. “They were not getting early orders which is a bad sign,” he said.

Juricic said that when the price dropped to $14 the company tried to compensate by increasing the number of available shares from 29 million to 33 million. But “people don’t like these deals.”

Martin Steinbach, of the global IPO leader at EY told CNBC the 2017 IPO outlook was positive.

“We have a strong momentum from the fourth quarter, so the IPO activity rose by 25 percent compared to the third quarter,” he told CNBC’s “Squawk Box Europe.”

“Laureate couldn’t succeed even in this market,” Dion said. “No one wanted this puppy.”

Juricic said another problem for the company was that “a big chunk” of the company’s operations are oversees, including a major presence in Latin America.

Chile, Brazil and Ecuador are tightening their regulations governing for-profit educational companies like Laureate.   He said those regulatory changes could adversely affect the company’s bottom line.

And there could be changes under the Trump administration.  “There is no appetite amid all this uncertainty,” he told TheDCNF.

The company also hinted in its filing it could face Justice Department prosecution under the Foreign False Claims Act concerning Title  IV of rules set down by the U.S. Department of Education.

Under federal rules, company employees at for-profit schools are not supposed to be awarded commissions based on the number of students they enrolled.

However, Laureate hinted in its filing that violations may have occurred.

“If the DOE were to determine that we or any of our U.S. Institutions violated this requirement of Title IV programs, or if we were to be found liable in a False Claims action alleging a violation of this law, or if any third parties we have engaged were to violate this law, we could be fined or sanctioned by the DOE, or subjected to other monetary liability or penalties that could be substantial, including the possibility of treble damages under a False Claims action, any of which could harm our reputation, impose significant costs and have a material adverse effect on our business, financial condition and results of operations,” Laureate stated in its federal filing.

“There’s just a lot of questions about this company,” Juricic said.

SEALs Knew ‘They Were Screwed From Beginning’ In Fatal Yemen Raid, Went Into Battle Anyway