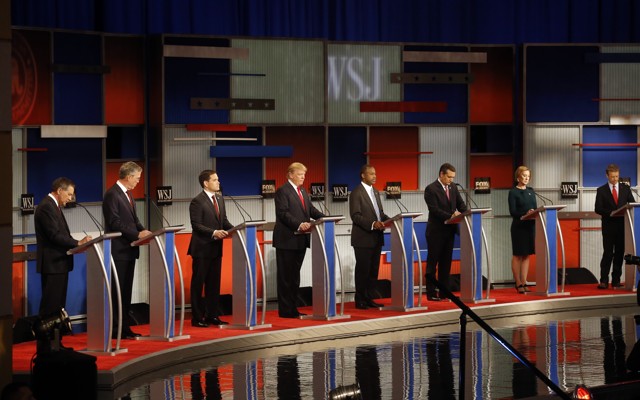 Disecting the GOP Debate From a Libertarian Perspective

[dropcap size=small]T[/dropcap]he fourth GOP Debate was a turning point in the presidential contest. Lindsey Graham was removed from all debates, Chris Christie and Mike Huckabee were demoted to the undercard debate, and there was more time to go around for all candidates on the main stage. Thus, as time marches on, the candidates have more time to show their true colors on the issues. This also means less of a spotlight was put on candidates like Donald Trump and Ben Carson, who monopolized the previous three debates. Other candidates, most notably Rand Paul, were allowed to voice their opinion on issues previously unknown to voters. We got to see a side of those candidates we hadn’t seen before.

Discussion started with the minimum wage. Being Republicans, there was a general consensus that the minimum wage kills jobs. While this is true, it didn’t make for much of an interesting discussion. The debate didn’t start out as much of a debate.

A notable element in this debate was a desire of the candidates to attack Democrats more so than their Republican competitors. For example, in nearly every answer she gave, Carly Fiorina (as well as Christie) did not hold back on attacking Hillary Clinton. The reasons for this sudden aggressiveness towards the Democrats, away from their fellow Republicans, was likely caused by approaching primaries and the desire to not anger a potential nominee. Fiorina, for example, knows she is unlikely to get the nomination at this point, so she wants to seem like a good choice for a running mate for someone who does. If you can’t beat ’em, join ’em, as it were.

A number of libertarian-leaning candidates spent the early debate waiting for Rand Paul to chime in. After all, the previous debates barely allocated him time. When given the question of income inequality, Paul pointed out that most income inequality in America occurs under Democrats and that the Federal Reserve has a large role to play in poverty.

It’s up for some debate if Democrats are mostly responsible for income inequality. Many Democratic cities are indeed unequal while many Republican cities are more equal in income, however this could be for a variety of reasons such as geography, logistics, and population size. Yet, as Brian Darling told Politifact a year ago, Paul’s statements on Democratic cities being unequal is more a reference to how Democrats fail to solve the problem rather than how they may be responsible for it.

Regardless, Senator Paul was the first candidate to mention how the Federal Reserve’s meddling in the economy is a major contributor in income inequality. That is something all libertarians can agree on.

Immigration has been called “the subject which will define the 2016 election.” Comments by Donald Trump have propelled the issue into the mainstream, with people from all ends of the political spectrum chiming in on the controversial issue. However, tonight immigration seemed less of an issue than it was in the early days of the election. Donald Trump’s controversial statements no longer dominated the discussion as they once had. In fact, compared to previous debates, Trump’s voice wasn’t as loud or bombastic this time around.

Trump not only failed to captivate the audience as he previously did, he spent more time on the defensive. More and more voters seemed turned off by the idea of deporting millions of people; those challenging Trump’s positions were seen more favorably than ever before. Trump’s nationalism has proven to be an alienating factor in his campaign, but it should be noted that it mirrors that of Bernie Sanders to a surprising degree.

Not only would Trump’s proposed deportation be unpopular, but it would be expensive. According to an NBC report with US Immigration and Customs Enforcement Deputy Kumar Kibbel, Trump’s plan would cost $12,000+ a person, a total of approximately $137 billion dollars in total. How “conservative” of Trump.

The two most ironic things about the nationalistic sentiment Trump holds are that it not only requires more regulation on whom businesses can hire based on nationality, and it ignores the country’s history of being accepting of immigrants.

Taxes were a trending topic on social media and of great concern to many voters. Plans ranged from abolishing the IRS to a “fair” or a “flat tax.” Candidates shared a variety of opinions, while few realized that the income tax was an unconstitutional measure designed to raise revenue for World War I.

For a constitutional expert like Ted Cruz, it’s hard to see how he doesn’t realize that the income tax is unconstitutional and that even his proposed 10% income tax (welcome as it may be) is 10% of your income still stolen. Cruz also fails to mention how he would simultaneously abolish the IRS while having an income tax. Where would you file your taxes to? Cruz says on his website that we will need dramatically less accountants, agents, and facilities to process the tax forms, but surely we will need some. The only answer is that the IRS will be “replaced.” With what? Why would this new entity be any less wasteful than the previous government bureaucracy?

Even more ominous is Marco Rubio’s “pro-family” tax plan. The plan seems attractive at first, mostly because of the name. It allows families with children tax incentives so they don’t have to work longer hours. However, Rubio’s plan does not account for abuse of this system. If someone realizes they can write off their taxes for having another kid, what’s to stop them? Rand Paul rightly pointed out that this– coupled with Rubio’s proposed 10 trillion dollars in military spending– is not fiscally conservative.

The issue of foreign policy is one that separates conservatives from libertarians the most. The hawkish approach to dealing with foreign affairs turns off many voters, particularly the young. It is also an issue that has defined candidates as well as set them apart from the crowd. For example, the Iraq war and military interventionism continue to define Jeb Bush, pinning an embarrassing legacy to him that won’t dissipate. Bush is torn between admitting that his brother was wrong and shaming his family, and defending his brother’s legacy and proving to voters that another Bush wouldn’t hurt. This provided plenty of ammunition for Trump to use against Bush during the debate. Bush once again, no doubt at the orders of his neocon donors, asserted that “American leadership” is crucial. Trump’s response was somewhat libertarian, saying that the US shouldn’t even act as the world’s policeman, and that the US shouldn’t bear sole responsibility for safeguarding the world. However, Rand Paul’s inner libertarian kicked in once more, and suggested we stop funding our enemies, proving he was the true libertarian opinion that night.

Many young libertarians no doubt were disappointed with the warmongering of Ted Cruz. He had ascended to the near-top of some polls and is a favorite among Tea Partiers. However, when it came to foreign policy, Cruz’s opinion was more of the same ol’ same ol’. He offered no new approaches to dealing with terror other than attempting to destroy it. Carson too suggested we should attempt to make the caliphate “look like losers” by destroying their base of operations. However, only Rand Paul seemed to realize that the best way to win the game is to not play it.

Rand Paul’s non-interventionist foreign policy was dubbed “isolationist” by neoconservative favorite Marco Rubio, just as his father’s was in the last election. What Rubio fails to realize is that hawkishness and war is more isolating than non-interventionism. A peaceful country is one that welcomes trade from other nations and is respected and sought after as a place of innovation and business development. Paul understands this, and it will be interesting to see over the course of the election how Republicans react to the sole voice of foreign policy reason.

Most libertarians can tell you the best thing to do with the Fed is to end it, as a  central bank is not at all conducive to the free market. In fact, a central bank was advocated for in Karl Marx’s Communist Manifesto. Sadly, most Republicans did not take a very strong stance on the Federal Reserve. Paul and Cruz were the most vocal.

While Jeb Bush couldn’t even answer if he would bail out the banks again, Ted Cruz could. Cruz called for the an audit of the Federal Reserve and condemned the bailouts of Wall Street that were unfair to the American taxpayer and small businesses. Interestingly enough, Ted Cruz benefited from the bailouts personally. His wife was a Vice President of Goldman Sachs in Texas, a company that received $2.9 billion from the $182 Billion dollars used to bailout AIG, according to an FCIC report obtained by HuffPo. It’s doubtful Cruz condemned the bailouts at that point.

Only Rand Paul could honestly say he’s got the interests of auditing the Fed at heart. He has not received any bailout money as Cruz has, and he continues to carry his father’s legacy to audit the Fed and remove it’s influence in our economy.

One of the most mysterious trade agreements of all time was revealed in it’s 6,000 page entirety recently. The TTP contains provisions about anything from tariffs to intellectual property rights. It would take far too much time and study to closely examine the thousands of provisions the agreement contains in order to form a fair opinion on it to broadcast to the voters, and the candidates can only honestly say we should have read into it more before endorsing it. This was not the case for Donald Trump.

Trump’s big mouth ate his foot when he complained the TPP unfairly benefited China. Trump railed against Chinese economic aggression and the unjust implications of the trade agreement. He, and several other candidates at various points in the debate, inaccurately attributed the Chinese manufacturing sector to the woes of American joblessness. Trump and the other candidates did not take into account changing job requirements in the US, not China, are moving jobs to higher skill levels, thereby “stealing” manufacturing jobs. However, the most embarrassing moment for Trump in the entire debate was when Rand Paul corrected Trump on China’s role in the TPP; it doesn’t actually have one. In fact, Paul was right to point out that China stands to gain competition from other countries thanks to the deal. Here’s the exchange:

This debate was an interesting spectacle because it wasn’t dominated by Carson and Trump as the previous debates had been, most likely because less candidates allowed more people to get more time. No longer could the media just pamper a certain candidates with coverage without it seeming overtly lopsided. Additionally, we saw a resurgence of Rand Paul’s inner libertarianism that will hopefully attract more voters to the liberty movement. Overall, it’s reasonable to assume this debate was a turning point in the election, and now the former front runners are being challenged for their positions by those who,m may have seemed nonthreatening months ago. 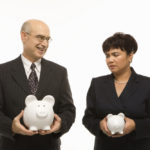 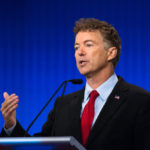