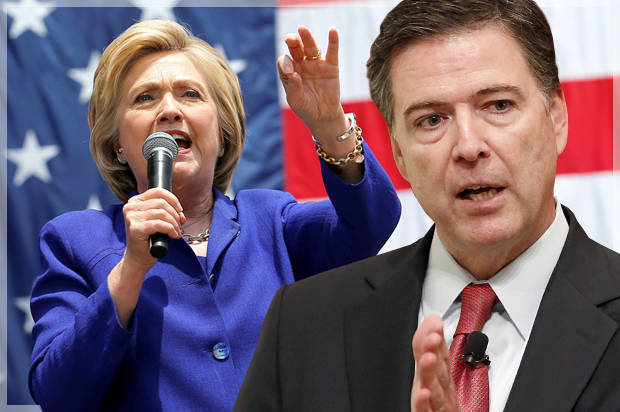 The FBI received a purported Russian intelligence report that may have convinced former FBI Director James Comey to prematurely shut down an investigation into whether Hillary Clinton intentionally revealed classified information through her use of a private email server.

According to the FBI’s own assessment, however, the document was bad intelligence and may have been sent to the FBI to delibarately confuse the Bureau.

The report, given to the FBI by a source March 2016, detailed a supposed email in which then-Attorney General Loretta E. Lynch assured a Clinton campaign aide that investigators wouldn’t look too deeply into the matter, the Washington Post reported Wednesday.

The Russian document was one of the primary factors influencing Comey’s decision to announce, without approval from Justice Department leadership, that the email investigation was over July 5. If the alleged exchange had become public, it would have cast doubt on the outcome of the investigation, according to FBI officials familiar with the document.

“It was a very powerful factor in the decision to go forward in July with the statement that there shouldn’t be a prosecution,” people familiar with the matter told WaPo. “The point is that the Bureau picked up hacked material that hadn’t been dumped by the bad guys [the Russians] involving Lynch. And that would have pulled the rug out of any authoritative announcement.”

According to officials close to the situation, however, many within the FBI had come to believe that the Russian document was unreliable and was possibly a piece of misinformation planted to mislead investigators.

The document reportedly described an email supposedly written by then-Democratic National Committee chair Debbie Wasserman Schultz to an employee of the George Soros organization Open Society Foundations. In the email, Wasserman Schultz allegedly claimed that Lynch had assured senior Clinton campaign staffer Amanda Renteria that the FBI investigation would not go far enough to implicate Clinton in any criminal activity.

By August, the month after Comey concluded the investigation, the FBI had come to the conclusion that none of the Russian document’s claims could be corroborated. Wasserman Schultz and Renteria told WaPo that FBI agents never interviewd them about the alleged email. The Soros employee, Leonard Benardo, also denied having any contact with the FBI on the matter.

Most of the people familiar with the Russian document disagree with Comey’s firing earlier in May, reports WaPo, but they have criticized officials now claiming that the document was an important factor in Comey’s decision on the Clinton email investigation.

“It didn’t mean anything to the investigation until after [senior FBI officials] had to defend themselves,” one person familiar with the matter told WaPo. “Then they decided it was important. But it’s junk, and they already knew that.”

Comey supporters also claim that the document was a good reason for abruptly announcing the close of the email investigation without consulting with Lynch, given the sensitive political issues surrounding the probe.

Comey himself publicly testified that, if the announcement had come from Lynch, it would not have been considered credible after she met with former President Bill Clinton on an airport tarmac last year.

Roof Believes White Supremacists Will Take Over America, Pardon Him