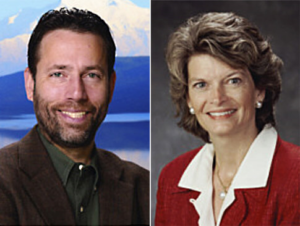 In a poll run by The People’s Pundit Daily (PPD) of 317 likely Alaskan voters who are going to vote in the Senate race in November, the results are quite promising for Libertarian candidate Joe Miller.

In the poll, which was conducted according to level 1 AAPOR standards of disclosure and WAPOR/ESOMAR code of conduct, Republican incumbent Senator Lisa Murkowski is at 38% to Libertarian Miller’s 30%. It shows Democratic candidate Ray Metcalf at 13% and an undecided vote above him at 19%.

As a result of the polling and subsequent data, the Alaska Senate race is rated a “BATTLEGROUND” on the PPD 2016 Senate Election Projection Model. PPD will revisit the race with more polling surveys in the near future.

Miller is definitely benefiting from being the Tea Party GOP choice for senate in 2010, though he lost to Murkowski’s write-in campaign under shady circumstances, prior to his run as a Libertarian this year. He is the only pro-life candidate in the race and has recently received the endorsement of conservative radio talk show host Mark Levin.

Keep an eye on Alaska, as public opinion, and projections show a contested contest is likely. The nation may elect its first U.S. Senator under the Libertarian banner.

RELATED: Joe Miller Responds to TLR: “I Am A Federal Libertarian”