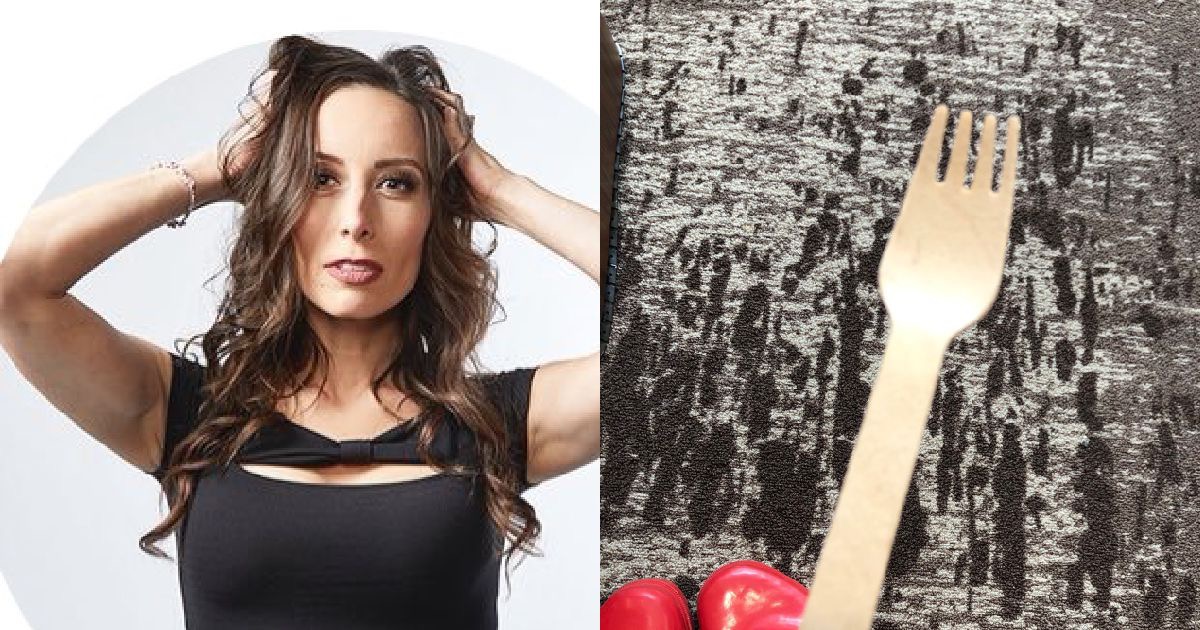 Sara Gonzales, host of The Blaze Media’s show “The News, and Why it Matters”, addressed a leftist Twitter user on Wednesday who attempted to dox and harass her over a joke she made on Twitter a few weeks ago about a wooden fork.

The tweet reads “I was just given a crappy wooden fork to eat chicken with and I want to remind everyone this is the stupid future @AOC wants for us.” and was accompanied by a picture of her holding a small wooden fork. Sara’s joke was obviously a comical stab at Rep. Alexandria Ocasio-Cortez’s (D-NY) “Green New Deal” legislation.

I was just given a crappy wooden fork to eat chicken with and I want to remind everyone this is the stupid future @AOC wants for us. pic.twitter.com/OgERjGyAEx

It didn’t take long for things to get nasty, as it always seems your standard social justice warrior Marxist never seems to be able to take a joke.

Ever heard of bamboo? That's what these items are generally made of.

Bamboo grows quickly and there is an abundance of it produced every year.

Not to mention, it's sustainable and has no environmental impact. Actually, it provides cleaner oxygen.

Thanks for your interest in my nails, Kathy. I’m actually getting them done right now. As a hard working mom, I don’t get to the nail salon as often as I’d like. Perhaps you can’t relate. Take care pic.twitter.com/rk8vqxOJrI

A mother would care about her kids dying from pollution instead of bitching about a fork.

Since it is SO difficult for you to eat with a wooden fork maybe you should just donate your food to people, children, who are starving in this country. They won't mind a wooden fork.

Do you prefer this? I don't blame you, I blame your parents for having unprotected sex being siblings. pic.twitter.com/OxgUerP5UL

Things really heated up when one of these leftist Twitter users went beyond your standard run of the mill insult and attempted to harass and dox Gonzales, going to great lengths to find her personal email account, sending her threatening e-mails, and publicly tweeting out her legal last name in an attempt to dox her for making the joke. Gonzales doesn’t use her last name publicly in an effort to keep her personal life separate from her career.

My wooden fork tweet upset someone so much that they went to the trouble of threatening me at my personal email address.

I’d like to warn anyone who thinks it’s a good idea to stalk and/or dox me that I live in Texas, and we carry. God bless. pic.twitter.com/0Z8XgrTPnd

At the conclusion of Wednesday’s episode of “The News and Why it Matters” Gonzales addressed the issue publicly on Blaze Media, explaining to viewers what happened and issuing a public warning to her stalker.

“Well tough guy, allow me to answer you publicly, where the whole world can hear because I’m not a cowardly little man who hides behind a fake e-mail address sending threatening e-mails to women with whom I disagree. Not that it matters to it matters to anyone other than you and the rest of the rabid Left foaming at the mouth for some sort of intersectionality war, but my maiden name is Gonzales. I was born Sara Gonzales, one of my grandparents came from Spain, the other from Mexico and I’m terribly sorry if my skin isn’t brown enough for you. And this is the exact reason I use my maiden name, because cultists like you will go to any length possible to silence those to who do not think as you do, who do not do as you do, who are not sheep parroting the same tired talking points from the left, and if you think for one second that you’re going to intimidate me into shutting up, you are dead wrong. People like you are the reason I do what I do. You are the reason I work tirelessly to remind people of truth and facts and history, by the way, all of which are on my side. So, you can continue stalking me and violating my privacy if you like, but I’d like to remind you, I live in Texas, and we carry!”

Sara’s boldness and commitment to the cause of liberty in spite of personal threats to her life is both encouraging and inspiring. It should encourage everyone to boldly speak out for truth, reason, and liberty no matter the cost. Thank you, Sara, for being a fiery Latina for liberty!

A Parrot Tipped Off Drug Dealers To A Raid. Now The Bird Is In Custody