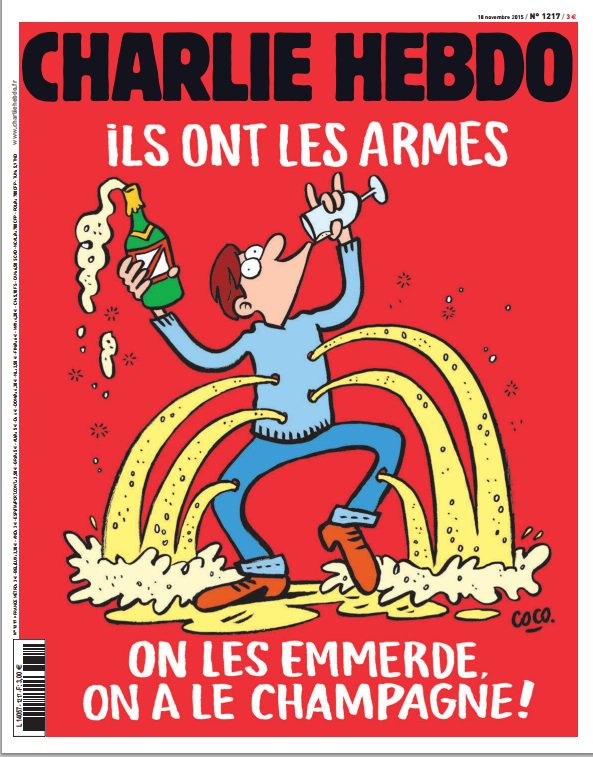 After the November 13 terrorist attacks in Paris, Charlie Hebdo has a simple message for ISIS.

The French poet and essayist Charles Baudelaire once pondered the modern phenomenon of “Dandyism” in an 1863 essay:

“Contrary to what a lot of thoughtless people seem to believe, dandyism is not even an excessive delight in clothes and material elegance. For the perfect dandy, these things are no more than the symbol of the aristocratic superiority of his mind.”

Baudelaire then presents a compelling image of the dandy’s “aristocratic superiority” of mind in iconoclastic terms:

“It is the pleasure of causing surprise in others, and the proud satisfaction of never showing any oneself. A dandy may be blasé, he may even suffer pain, but in the latter case he will keep smiling, like the Spartan under the bite of the fox.”

I relay Baudelaire’s take on dandyism because it seems to be proven today as prophetic, as an apt description of the modern, “Western” man in the face of his opulence and others’ barbarism. Take, for instance, the recent response by the famous French satirical magazine Charlie Hebdo in light of the recent November 13 terrorist attacks in Paris.

Even though the offices of Charlie Hebdo were shot up themselves earlier this year–leaving 11 dead and 11 more wounded–the artists at Hebdo remain undeterred in their fearless pursuit of “causing surprise in others.”

Here is the Charlie Hebdo staff’s most recent cover: 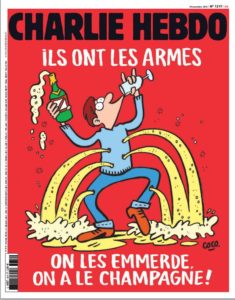 In English, the cover reads, “They have weapons. Fuck them, we have Champagne!”

What a glorious response!

Charlie Hebdo keeps smiling like the “Spartan under the bite of the fox” indeed.