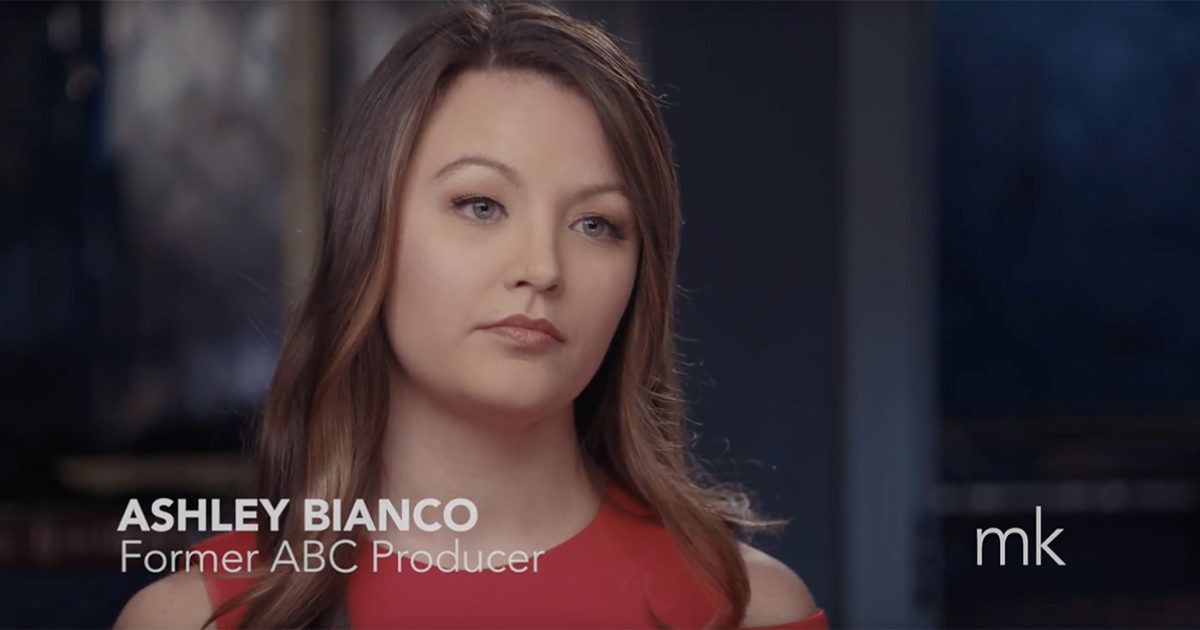 –  The woman, Ashley Bianco, was fired from her brand-new job at CBS News after ABC executives contacted the network and informed them of the situation.

–  Bianco told Kelly that she is not the leaker and she never accessed the video after originally clipping it, a process that she said they did all the time.

Journalist Megyn Kelly spoke to ABC’s alleged whistleblower during an exclusive interview posted on her Instagram account Friday, and the woman denied being the whistleblower.

ABC’s Amy Robach was caught on camera saying the network killed her interview with Jeffrey Epstein’s accuser Virginia Roberts Giuffre, according to a video Project Veritas released Tuesday. The anchor said Buckingham Palace threatened ABC News after finding out Prince Andrew was a part of the story and added that she “had all of” the reporting years ago. Epstein was accused of sex-trafficking children.

The woman who has been accused of having access to the tape is former ABC News producer Ashley Bianco, 25, who spoke to Kelly in an exclusive interview after CBS News fired her Wednesday. She worked at CBS for just four days after leaving ABC before being fired, she told Kelly. Executives at the outlet allegedly informed CBS of the situation prior to her firing, journalist Yashar Ali reported.

“It wasn’t me, I’m not the whistleblower. … The leaker’s still inside,” Bianco said.

“They [Project Veritas] released the video, and you know I was shocked, but I didn’t think anything of it,” Bianco said in the tearful interview. She admitted to clipping the video for “office gossip,” but said she had no intention of embarrassing ABC or Robach.

She added that they clip moments off “all the time” and said she never re-watched the video after clipping it. Bianco said she “never even heard of Project Veritas” before the video came out, and Project Veritas has come out and said that Bianco was not the person who leaked the video, Kelly reported Friday.

“I didn’t touch it. I didn’t do anything else to it. I never went back to it,” Bianco said as she tearfully denied releasing the video.

Kelly teased the interview Thursday on Twitter and with her first Instagram post Friday morning. In a preview on Twitter Friday afternoon, Bianco said that at first, she had no idea why she was fired from CBS News.

After the video leaked Tuesday, ABC News confirmed in a statement that it was trying to find the source of the leak. It is not known if Bianco leaked the video, but the network allegedly had knowledge she had access to the tape. Bianco said she had no idea why she was fired and denied leaking the video.

“We take violations of company policy very seriously, and we’re pursuing all avenues to determine the source of the leak,” an ABC spokesperson said, according to Ali.

ABC News denied killing the story due to pressure from powerful individuals and said Tuesday that “not all of our reporting met our standards to air.” It added that “we have never stopped investigating the story.” The outlet said it has a team dedicated to investigating the allegations against Epstein and that “a two-hour documentary and 6-part podcast” will air in 2020.

Robach also walked back her comments, attributing them to a moment of frustration. She said in a statement Tuesday that the interview with Giuffre “didn’t air because we could not obtain sufficient corroborating evidence to meet ABC’s standards.”

Bianco appears to have deleted her Twitter and LinkedIn following being fired from CBS News.

‘Concerning And Scary’: Andy Ngo Speaks Out On Antifa’s Future If Trump Wins In 2020

What Types of Rewards are Available on American Credit Cards?