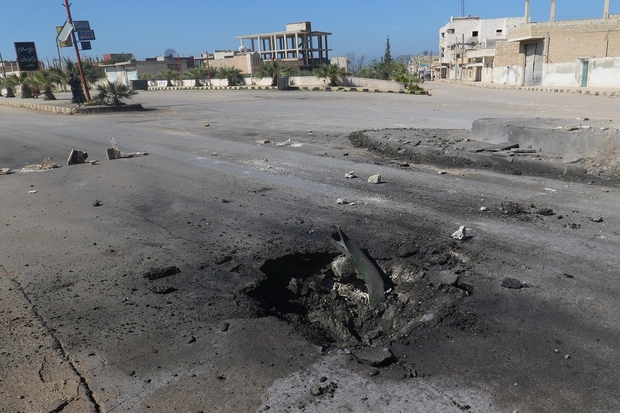 Russia claimed at a U.N meeting today that the chemical weapons attack that killed nearly 100 people in Idlib, Syria, was the fault of the rebels – claiming the airstrike carried out by the Syrian government was designed to attack a rebel weapons cache, which in turn ignited and released the deadly toxin into the air.

The story was dismissed immediately. Many featuring the quote from Colonel Hamish de Bretton-Gordon: “I think this is pretty fanciful and no doubt the Russians trying to protect their allies. Axiomatically, if you blow up sarin you destroy it,”.

In 2015, Bretton-Gordon stated that all ISIS fighters would likely receive chemical weapons training as well. Considering the Syrian rebels are fighting ISIS in addition to the Syrian government – it’s possible ISIS, and not Assad, were responsible.

Considering Assad’s position – under pressure from the global community and under threat from an American or British invasion, deciding to use chemical weapons to kill Syrian non-combatants at this junction doesn’t seem to make much sense. Idlib, where the incident occurred, is one of the few remaining strongholds for the rebels. A chemical weapon attack could galvanize and re-energize them.

Also in 2013 – U.N Investigator Carla del Ponte alleged there was evidence that rebels – not the government, had used Sarin gas in their fight for democracy.

This is problematic. The United States of America has a checkered history regarding arming rebels, combatants – arming and abandoning Afghanistan’s people in their war against Russia,  ‘creating’ ISIS, and so on.

Considering the CIA stopped, but recently resumed their financial support of the Free Syrian Army – the notion that the federal government backed a rebel group willing to – at the least – stockpile chemical weapons, would raise major concerns regarding who, exactly, we align ourselves with regarding overseas conflicts.

This means, literally, the United States Government directly funded a group that had  and could have used chemical weapons in 2013, or in a number of other incidents as well.

Regardless, this all comes down to whom you choose to believe.

When both Brietbart and NBC News make a deliberate point of stating the videos of the incident are unverified – in a world of ‘reports’, ‘officials’, and ‘unnamed’ sources – something is off, and you clearly can’t trust anyone.

Ask yourself this question – in a globally maligned war that is nearly almost won, whom do you think is most likely to have the need for chemical weapons? Those that are about to win, or those who need every chance they can get?

Truth be told, Russia’s story doesn’t quite add up. Questions about the size of bomb craters, differences in the timing of the attacks, and other factors tend to support the idea it was a government-executed attack.

Plus, it’s not like The United States would lie about a foreign country’s deadly weapon cache or anything.

Ultimately the point is this – if there was ever a reason for the United States to get involved in Syria on a major level, there are worse reasons to do so. This is a problem because The United States’ track record regarding middle eastern conflict is poor, and there’s very little evidence to believe we’d be capable of doing much of anything without making things worse then they already are.