With the election of the Liberal Party in Canada, Prime Minister Justin Trudeau has promised to legalize the drug, adding to the already existing medical marijuana regime in the country.

“Support for making marijuana legal is increasing around the world, and that is a good thing,” The New York Times wrote.

That support took the form of an historic bill in the Senate forwarded by Sanders, who proposed to deschedule marijuana and let the states decide their own stance on the drug. The bill would send a clear message that marijuana does not have a high potential for abuse and does in fact have medicinal value. Transporting marijuana across state lines, however, would be illegal, which would allow states the autonomy to set their own policy.(RELATED: Bernie Sanders Just Introduced A Major Marijuana Reform Bill In The Senate)

According to The New York Times, marijuana is far less harmful than either tobacco or alcohol and laws prohibiting the drug have resulted in billions of dollars of waste.

Four states and the District of Columbia have legalized marijuana, and while Ohio at first looked like it might join the pack earlier this week, voters weren’t ready to pass Issue 3, a measure that critics said essentially granted a monopoly on production. The Ohio vote is not an indication of anti-marijuana views, so much as it’s an indication that voters won’t agree to just any regulatory framework to get their hands on legal marijuana. (RELATED: The Polls Said Yes, But Voters Said No: Recreational Marijuana DEFEATED In Ohio)

Assuming Congress puts the brakes on marijuana policy reform, Obama could request a study to be conducted, which is a necessary pre-requisite of taking executive rescheduling action. Obama has in the past argued thatmarijuana reform is a job for Congress.

“A growing group of activists, judges and lawmakers is showing the world a path to more sensible drug policies,” the editorial board concluded. “Mr. Obama and Congress should join them.”

Fracking, Not Renewables, Is Responsible For Emissions Reduction 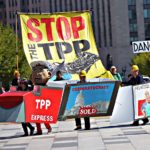