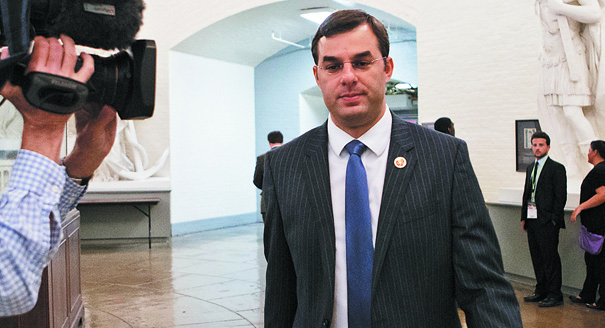 In case you’ve somehow missed it, Michigan Representative Justin Amash has been in the national spotlight lately. Back in May, Amash dropped a Twitter thread bomb in which he detailed his response to the Mueller report – after doing something unheard of: actually reading it- and concluded that President Trump committed impeachable offenses.

Here are my principal conclusions:
1. Attorney General Barr has deliberately misrepresented Mueller’s report.
2. President Trump has engaged in impeachable conduct.
3. Partisanship has eroded our system of checks and balances.
4. Few members of Congress have read the report.

Since then, Amash has been the talk of the town in a way that very few House members are. Amash had a fervently pro-Trump primary challenger pop up soon after, and a recent report surfaced that Trump is contemplating a decision to back said challenger. This seemed to be confirmed when Donald Trump, Jr. quote tweeted a poll showing Amash’s primary challenger, Jim Lower, leading by 16 points, saying “See you soon, Justin… I hear Michigan is beautiful during primary season.”

See you soon Justin… I hear Michigan is beautiful during primary season. https://t.co/dZzDU9240V

Amash’s response left little doubt about his plan and confidence in the outcome.

if it's what you say I love it especially later in the summer https://t.co/KmtA2khvLs

Between occasional Twitter threads further clarifying his position on the Mueller report and hosting a town hall – which our own Steffi Cole profiled here – Amash has kept himself in the public eye without doing interviews, even as his primary challenge and subsequent road to reelection becomes more unclear.

Amash wouldn’t be the first Republican Congressman to be ousted after openly opposing Trump, of course. Mark Sanford, a good friend of Amash and former member of the House Freedom Caucus, was defeated in his primary by a pro-Trump candidate, who then lost the general election to a Democrat. Jeff Flake decided not to even run for reelection to his Senate seat because of the mounting support for pro-Trump challenger Kelli Ward, who wound up losing the primary to Martha McSally anyway.

But Amash has an option that Sanford and Flake didn’t really have: running for president. That was never really an option for Sanford, whose once-promising political career was given a sort of glass ceiling after his extramarital affair became public back in 2009. Flake had a short-lived flirtation with a presidential run, but his only options were to run with the Republican party that was forcing him out or as an independent, where he would have to spend millions of dollars on ballot access alone.

Amash holds the option of running with the Libertarian party, which fits his political positions much better than Flake ever did. He has always been a libertarian, and is one of the few politicians to openly refer to himself as such. You could even argue that Amash fits the mold of the Libertarian party better than their most recent presidential nominee, Gary Johnson, who received a record-breaking 4.5 million votes in 2016 that set the party up for long term success.

Having already broken away from the House Freedom Caucus he helped found, a break from the Republican party could be next on the agenda. After all, the Libertarian party already has ballot access in a whopping 33 states, and seven of the remaining 17 states have fairly low thresholds for ballot access. In other words, it’s a virtual lock that whoever the Libertarian party nominee ends up being, they’ll be on the ballot everywhere.

But how viable could an Amash campaign really be? Beyond ballot access, there’s an obviously huge barrier for any candidate. Johnson performed better than anyone in party history and still didn’t hit higher than 3.3%. There are three main things that tend to matter the most in presidential campaigns: money, endorsements, and TV time. How does Amash fare in those categories?

Whether or not you like it, money plays a huge role in politics these days. If you can’t fundraise, you don’t stand a chance. Amash doesn’t have a particularly impressive track record as a fundraiser, but he hasn’t needed to. House races are typically cheap contests comparatively speaking, and Amash ran as a Republican in a reliably red district. That said, he raised over $1 million for each of his first three House races, peaking at $1.8 million in the 2014 election where he faced a primary challenger. His two reelection campaigns since have both raised between $600,000 and $700,000.

Most of those donations have been individual donors and local companies in and around Amash’s district, as well as GOP fundraising machines. But what’s intriguing is Koch Industries’ (KOCHPAC) – yes, that Koch Industries – has made a total of $25,000 in campaign donations to Amash since 2012. Of course, Charles and David Koch famously sat out the 2016 presidential election in protest of Trump, but not before coming very close to backing Johnson’s campaign. And with rumors of Koch Industries getting ready to fund some Democrats, a potential role as mega donor for an Amash Libertarian campaign doesn’t seem far fetched.

In 2016, Johnson raised a record-breaking $13.3 million without Koch Industries. Their top two contributors were advertising agency Harmon Brothers and food processing company Morning Star. Now, it’s not a given that all that money will come back for 2020, as some donors may have been drawn in exclusively by Johnson or his running mate Bill Weld. But if Amash can draw in about the same number and add Koch Industries, the Libertarian party will be looking at a ton of cash.

*It’s worth noting that David Koch ran as the vice presidential candidate with the Libertarian party back in 1980. He reportedly invested $100,000 a month of his own money into the campaign.

Endorsements are incredibly valuable to a campaign because they are tangible evidence of a campaign’s credibility. If a candidate has only a few endorsements, voters are more likely to think of them as not being serious. Like money, endorsements aren’t huge in House races, and therefore Amash isn’t overflowing with potential endorsements waiting in the wings.

However, there is some great potential to be had. Bill Kristol, the self-proclaimed leader of the Never Trump movement, has tweeted his admiration for Amash’s courage despite disagreeing with him on many issues. David French, Iraq War veteran and National Review writer whom Kristol tried to recruit to run against Trump in 2016, tweeted that he’d vote for Amash in a third party bid in a heartbeat. Amash could probably also count on the aforementioned Congressmen ousted by Trump, Mark Sanford and Jeff Flake. Maybe even Bob Corker, a Tennessee Senator who retired similarly to Flake after publicly criticizing Trump several times.

Amash could also potentially extract a few endorsements from members of the House, either current or previous, with whom he’s served. While the House Freedom Caucus turned on Amash, many of his allies in the House still speak highly of him as a person, and one or two may be swayed to endorse him if there’s enough support early on. Amash might even be able to score an endorsement from Mitt Romney, a sitting US Senator who strongly considered endorsing Johnson in 2016 and who has been dodgy on whether he’ll endorse Trump, or anyone, in 2020.

Of course, there are other prominent figures who endorsed Johnson last election who would likely follow suit with Amash. These include Andrew Napolitano, a former judge who now serves as an analyst on Fox News, and who also agreed with Amash’s take on the Mueller report. Other names include Overstock CEO Patrick Byrne, The Price is Right host Drew Carey, Vegas magician Penn Jillette, and podcast star Joe Rogan. Additionally, unlike Johnson, Amash could probably score an endorsement from Ron Paul, to whom he is very close.

This, in addition to receiving endorsements from multiple newspapers as Johnson did, would give a certain level of credibility to an Amash campaign that makes him hard to ignore.

Arguably the most important aspect is TV time, whether it be paid or not. If voters can’t see you, they won’t vote for you.

Amash is wisely not taking interviews right now, as it backs up his assertion that his impeachment comments were not motivated by political gains. But the interview requests are still raining down upon him, and an announcement of a presidential campaign would no doubt increase those requests. Free television time is important to take advantage of, as a 30-second national TV ad costs north of $100,000. Using Twitter and other social media is valuable too, and we now know that Amash has the requisite social media snark to succeed there. But it can’t replace TV time entirely.

Of course, the most important factor here is making the presidential debates. To do that, Amash will have to hit an average of 15% in five arbitrarily chosen polls. Johnson failed to do so in 2016 among some dubious polling procedures, but Amash might have the name recognition and spotlight to do so as a sitting member of Congress.

A recent poll found that in the state of Michigan, Amash would garner 10% of the vote in a matchup against Trump and Joe Biden. While that number is certainly inflated somewhat by Amash being from Michigan, it’s encouraging that he’s polling that high before even announcing. With some actual campaign tactics put to use, Amash could, and likely would, bump that number up a bit.

If Amash were to qualify for the presidential debates, it would lend more credibility to his campaign than anything else possibly could. Plus, as we saw from the town hall, Amash can more than handle himself in a contentious debate setting.

The stage seems to be set. All that’s needed now is for Amash to actually announce. And, you know, a lot of time, money, and effort. For what it’s worth, there are several House members who firmly believe Amash is going to run for president, while the Michigan representative still refuses to rule anything out.